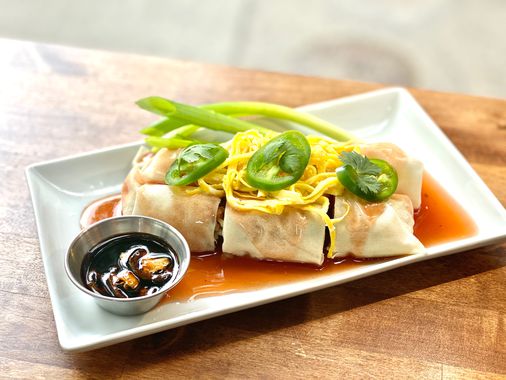 Here are some of the stars:

The “local” is Brookline. The “flavor” is Thai. Mahaniyom is what happens when an expat couple – co-owners Chompon Boonnak (formerly of Shojo) and Smuch Saikamthorn – come together to share a taste of home for them. This small restaurant with a clean menu made us pale with its rambutan salad, crab curry with coconut milk, rice sausage with pork and beef massaman – not to mention the remarkable cocktails and herbal infused spirits served with pickled mango and pandan leaf water. It is also the ideal rare place to eat there as well as to go out.

Most Popular Debut: The Pearl

This seafood restaurant brings style, scene and shrimp cocktail to Dorchester’s South Bay Mall. If you didn’t expect to find a glamorous Miami vibe between Target and The Home Depot, you’re not alone. But crowds are showing how late The Pearl was – and the raw bar, lobster rolls, brunch, and craft cocktails make the wait for a table worth it.

Restaurant District of the Year: Chinatown

Historic treasure, Chinatown was one of the first neighborhoods to feel the effects of COVID. Banquets were canceled, foot traffic declined, and business fell 80% for many restaurants. But Chinatown perseveres, with its seafood tanks and plump dumpling steamboats and strong sense of community. If you haven’t visited or bought a takeout lately, now is a good time to do so.

Trend of the year: herbal possibility

Famous New York restaurant Eleven Madison Park made headlines when it announced it would no longer serve animal products. It was an important symbol of the advance of plant-based meals in recent years, with more and more people opting for vegan, vegetarian or flexitarian diets in the interest of their own health and that of the planet. . Locally, we’ve seen the arrival of companies as diverse as Dear Annie (a Pescatarian wine bar), Double Zero (a vegan pizzeria), Littleburg (a vegan Mediterranean take-out counter) and PlantPub (which serves vegan pub food and craft beer). Finally, we feel that meatless restaurants can be anything their creators want, from the most relaxed bar to the highest temple of gastronomy.

In May, a section of Dorchester’s Fields Corner was officially designated a Cultural District. Called Boston Little Saigon, the area has long been a center of Vietnamese community, commerce, and cuisine. With restaurants, cafes, and markets ranging from the Anh Hong family’s favorite to the palace of sweet sip dessert delights, this is one of Boston’s best areas to eat. Now he also has an appropriate name.

Chefs have been touting farm-to-table meals for years, but the guest is rarely transported to the farm. Open Hearth Gatherings shifts the focus of the meal, bringing groups to the land to experience the harvesting, preparation and consumption of food where it is produced. Participants work together, get to know each other, and then feast in a beautiful outdoor setting. It’s adapted to COVID, it’s community-based and it makes sense.

The open secret of this South End tapas restaurant is that it’s actually a seafood restaurant. The best dishes focus on fish. For a single bite that encompasses the glory of the sea (with a Spanish accent), order the erizo de mar from the “crudo” section of the menu. It’s toast topped with sherry butter and beautifully salted fresh Maine sea urchins. No more no less. It’s perfect (but while you’re there, don’t miss the alcachofas & boquerones, seared small artichokes with white anchovies on chive aioli).

The most beautiful: Contessa

It’s no surprise that the restaurant at the top of chic The Newbury (formerly the Taj and Ritz-Carlton) is a marvel. But it’s a total stunner. New York-based Major Food Group’s Boston first foray, the Italy-focused Contessa is a glass-enclosed space filled with plants, pastel tiling, and where diners take in views of Back Bay from velvet banquettes. pink. It’s a feast for the eyes, inside and out.

The most adorable: Cicada Coffee Bar

Combine the artistic vision, Vietnamese flavor and sensibility of Cambridge, and put them in the hands of warm, creative, passionate and original humans, and you have the Cicada Coffee Bar. The Central Square spot operated by Vinh Le and Duong Huynh specializes in pho noodle salads, banh mi and excellent daily coffee drinks; delicacies from viet cheffy (duck tartare with lemongrass, monkfish with turmeric, dill and vermicelli) and plain wine on weekend evenings; and an eternal, supernatural ability to draw people into its orbit in a lasting way.

On expansive grounds in Chelsea, nestled under hot radiators, sample artful Peruvian dishes from chef-owner Jose Duarte, who has long run North End favorite Taranta. Tambo 22 appears like a mirage, an outpost of the Andes, with indigenous ingredients like tarwi bean, Amazonian paiche fish and an array of peppers and herbs. They are also found in cocktails like chicha morada sour.

Co-owners Cassandria Campbell and Jackson Renshaw create a brick-and-mortar version of their food truck of the same name, and Dorchester’s Codman Square gets a delicious addition. Fresh Food Generation serves a menu of healthy and tasty dishes you want to eat on a regular basis, from jerk chicken empanadas to kale salad and mac and cheese.

Thank You Award for Your Service # 1: Eastern Standard

Eastern Standard closed permanently in February after more than 15 years in business. The news was a blow to so many who spent time in Boston. The day before Kenmore Square was much appreciated, and people from all walks of life came for pre-game drinks and snacks, dates, birthday dinners, family brunches or (most likely) everything. the above. There was something for everyone, from the most picky child to the most demanding gourmand, including the amateur of craft cocktails seeking to deepen their knowledge. Goodbye, Eastern Standard, and thanks for all the marrowbones, the baked rigatoni, and the caramel bread pudding.

Thank You Award for Your Service # 2: Craigie on Main

Craigie on Main debuted as Craigie Street Bistrot in 2002, then moved to Main Street in 2008. In October, chef-owner Tony Maws brought Central Square restaurant to market. These days, we take things like farm-to-table meals, frequently changing offerings, market-oriented dishes, nose-to-tail cooking, and “chef’s capatic” menus for granted. It’s easy to forget how wild and welcome it all was when Craigie debuted, and how pioneering the restaurant’s approach was for the region.

This minimal micro-cabin is a serene shelter inspired by the A-frame chalets of the 1950s!