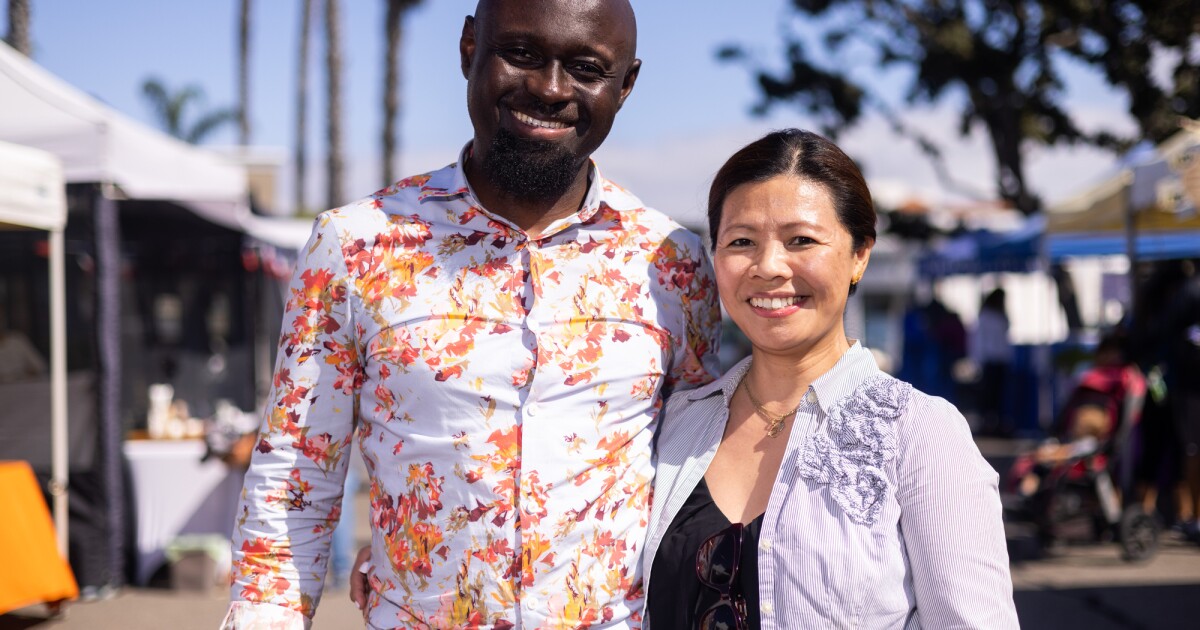 At the Masarap Cafe, West African and Filipino cuisines find their accord

Start your day with LAist

Sign up for How To LA, delivered weekday mornings.

Felix Agyei and his wife Hazel Rojas are both working their regular Monday-Friday jobs – Agyei as a data analyst and Rojas in educational services. But on Saturdays, they head to a shared commercial kitchen space to prepare food for Masarap Cafe, their West African-Filipino food pop-up that comes to the Riviera Village Farmers Market in Redondo Beach every Sunday.

Passing by their stall on a recent Sunday morning, Agyei calls and asks me if I want to try the goat stew. “If you don’t like it, I’ll give you a dollar,” he offers.

The combination of West African and Filipino cuisine is certainly rare, and Agyei knows he has to entice passers-by to try it (as well as convince them that his food won’t be too spicy.)

His tactic seems to be working – he says virtually everyone who tastes the food ends up enjoying it, and many become repeat customers (including me).

Felix came to the United States from Ghana and met his wife, Hazel, who is Filipina, while they were both working at New Design Charter School in Watts. The two started dating six years ago and got married in 2020.

Mixing West African and Filipino foods in one meal has become common in their household.

“It’s something we used to do at home,” Agyei said.

Rojas regularly cooked pancit, a traditional Filipino noodle dish, while Agyei cooked jollof rice, a West African staple dish made with rice, tomatoes and onions. When they were entertaining friends, everyone seemed to like the combination and the idea of ​​starting a restaurant slowly planted itself in their minds.

“The very idea of ​​the cafe came when we came downtown to eat at a Filipino restaurant,” Agyei recalls. He asked Rojas what the Filipino term for “delicious” was – and that’s how the name Masarap Cafe was born.

They first started at the Farmers Market in January 2020, but were closed a few months later when the pandemic hit and all markets had to close temporarily. They finally restarted in the summer of 2021.

At Masarap Cafe, tortang talong – a Filipino egg omelet where grilled whole eggplants are dipped in egg batter and pan-fried – is served with jollof rice.

Even the seemingly traditional West African dishes featured on the menu still manage to contain elements of Filipino cuisine. Agyei and Rojas have come up with their own sauce which they call Masarap sauce, combining Ghanaian spices with spices traditionally used in Filipino cuisine. The exact spices used are a closely guarded secret, but they are blended with olive oil, garlic, onion, tomato and ginger.

Masarap sauce is found in the majority of their menu, including goat stew, baked chicken, and baked salmon dishes, all served with jollof rice and a salad tossed with grapes and thinly sliced ​​apples that serve of palate cleanser.

Lately, Masarap Cafe has become popular enough that they still sell certain items every Sunday. Goat stew is one of their most sought after dishes. Pressure-cooked with the masarap sauce until tender, the goat meat is then cooked again in a savory tomato-based stew. Cafe Masarap opens at 9 a.m. on Sundays and goat stew can sell out around noon, followed closely by baked salmon.

Agyei and Rojas slowly added a few new items to the menu, including the masarap wrap – a wrap filled with jollof rice, corn, green beans and lima, carrots and chicken baked in their special masarap sauce – as well than a vegan version without the chicken. At around $6, the wrap makes for an easy and affordable meal that people can enjoy while shopping for produce at the market.

Rojas wants to add more menu items from his Filipino heritage, including pancit, but the couple don’t have the resources to do so yet.

“At the moment, it’s a bit difficult to have employees to help us. It’s just the two of us and [we are] continues to work normally Monday to Friday,” Agyei said. “We go to the kitchen on Saturday to prepare the food, then we sell it on Sunday. It’s a little difficult to add more items to the menu, but customers have been asking for more Filipino food. »

With all the positive feedback they’ve received, Agyei and Rojas plan to find a permanent location so Agyei can transition to running the restaurant full-time, as well as getting their masarap sauce on grocery store shelves.

They are currently looking for a location in the Los Angeles area, but with skyrocketing prices, they are still on the hunt for the right space. In the meantime, you can find them at the Riviera Village Farmers Market on Sundays.

Property of the week: Here, nature and architecture go hand in hand