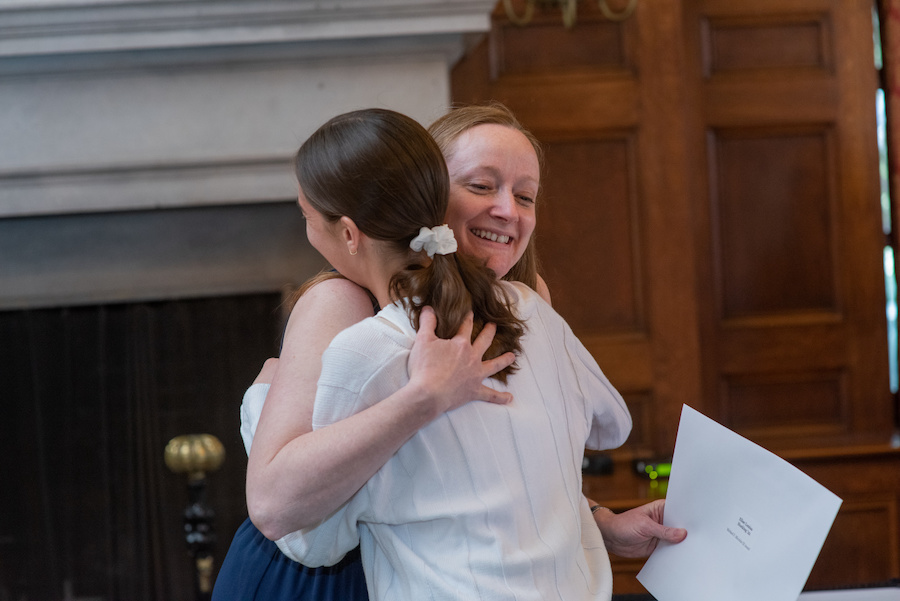 The annual President’s Award Luncheon, affectionately known as PAL, is an opportunity for the College President, Deans and others to applaud some outstanding students, especially seniors, for their exemplary leadership, service and skill. narratives.

Lunch was held last Friday in the main salon of Moulton Union.

The President’s Award was inaugurated in 1997 by President Robert H. Edwards to recognize a student’s outstanding personal achievement and outstanding contributions to the College.

This year, President Clayton Rose presented the award to Britt, who during his college career was elected by his peers as Bowdoin Student Government President, Class President, Class Vice President and Student Affairs Committee Chair. for student government. .

During his tenure as President of the Bowdoin Student Government, he increased the visibility of student governance and improved its effectiveness, particularly with respect to student mental health.

One of her most meaningful experiences at Bowdoin was working with the Division of Student Affairs to create a mental health council that meets monthly and provides students with a shared space to speak directly with administrators and management. consulting services for their opinions, challenges and ideas.

Britt, a religion major and government and legal studies minor from Mantua, Ohio, has been described as someone who has “one of the biggest hearts I know” and who “wants to do everything in his power to make this community a better place. ”

The Michael F. Micciche III Award is presented annually to that individual who embodies the entire Bowdoin experience, engages the College community, achieves academic excellence, and earns the respect of peers and faculty. This person should plan to expand their education after graduation, either by enrolling in a graduate school or through a structured trip or volunteer program.

A major in Asian studies and a minor in government and legal studies, Hocking was involved in multiple aspects of university life. She served as chief staff officer for residential life during two of the College’s toughest years during the pandemic.

She served as co-chair of Hillel; as an eco-representative (a peer-to-peer educator for the Bowdoin Sustainability Office); and as a member of the City of Brunswick Recycling and Sustainability Committee.

Hocking has also been involved with the McKeen Center, where she was a member of the Common Good Grant program for each of her four years here and was one of its two leaders, along with Jessica Bae ’22, this year.

She has also been involved with the Writing Center and the Program for Nonviolence and Conflict Resolution.

One of her proponents wrote, “Elise has been wise beyond her years since the day she stepped foot in our office as a freshman. She was organized, sees the big picture, and cares so much about the Bowdoin community. We were impressed by his composure, tact, intelligence and creative abilities.

After graduating, Hocking headed to law school at the University of Michigan.

The Andrew Allison Haldane Cup, donated by fellow officers in the Pacific in memory of Captain Andrew Haldane, United States Marine Corps Reserves and member of the Class of 1941, is awarded to a member of the senior class who displays exceptional qualities of leadership and character.

A major in anthropology and a minor in computer science, Bae has been described as a natural leader.

Her peers call her approachable and kind and say she easily builds trust in the spaces she leads. As overseer at MacMillan House, Jess fostered a welcoming environment and built relationships with virtually everyone in that community.

She served on the leadership team at the Bowdoin Outing Club, where, as a woman of color, she helped transform traditionally white spaces.

Themes of equity and inclusion inform much of Bae’s work. She helped the McKeen Center develop its anti-racism fellowship and worked with the center to broaden and deepen relationships with BIPOC-led nonprofits.

His other accomplishments include participating in the Bears and Cubs program as a mentor for local children and helping organize a Red Cross blood drive.

A colleague spoke for many when she described Bae as a ray of sunshine who brightens the lives of those around her. She’s caring, caring, and while she’s incredibly busy and involved on campus, she’s always willing to drop everything to help out a friend.

Provided by the Bowdoin Chapter of the Alpha Delta Phi Society, the Franklin Delano Roosevelt Cup is awarded to the member of the lower three classes whose vision, humanity, and courage contribute most to making Bowdoin a better college.

A major in biology and a minor in psychology, Dehney is a member of the men’s lacrosse team and is responsible for setting up Bowdoin’s Peer Counseling initiative, which is run by the student group Peer Health.

At his all-male high school, Chris participated in a weekly peer counseling program in which the school counselor held a live session with a student for all to observe before the students divided into pairs to have face-to-face discussions.

Dehney brought this program to Bowdoin to help de-stigmatize counseling by providing an informal doorway and to create another outlet for students who want to talk to someone outside of normal nine to five hours.

He worked with Counseling Services and Peer Health to formulate a program with ground rules that would work in Bowdoin. The first session of the program had about ten participants, but the following week the number increased to about fifty, so the program increased the number of meetings held throughout the spring semester due to the increase in Requirement.

One of Dehney’s nominators wrote, “I was deeply impressed by Chris’s passion, not only for filling a need he saw at Bowdoin, but also for taking initiative and following through on it. He was going to do everything he could to make this program happen – and keep happening – and he did just that.

Elizabeth Pritchard, Associate Professor of Religion and Associate Dean for Academic Affairs, presented the awards to the four students selected by the committee to be speakers at the upcoming graduation and baccalaureate ceremonies.

This year, two Geoffrey Canada Scholars, Britt and Browne, will speak at Commencement. For this honor, Britt received the Goodwin Launch Price and Browne the Class of 1868 Award.

Britt, from Mantua, Ohio, will deliver a talk titled “The Great Hope of a Bowdoin Education,” about his journey to Bowdoin as a low-income, first-generation student. In his speech, he describes “how his practice of keeping hope helped him to continually seek something better and fight to break his family’s cycle of poverty,” Pritchard said.

Browne’s speech, “The Victory Mindset”, will tell her story as she recovers from the devastating loss of her mother in October 2021. She describes the “victory mentality” she adopted following the loss of her mother , in which she saw the small steps she manages each day — getting up in the morning, eating a meal, going to class — as victories. “It was the accumulation of those small victories that helped pull her out of the depression,” Pritchard said.

Two other student speeches have been selected for the Baccalaureate ceremony and as a substitute. Brie Cunliffe ’22 received the First DeAlva Stanwood Alexander Award for his speech entitled “A Luminous Endeavour”. She uses the metaphor of diving into a sea of ​​bioluminescence to describe the community she found in Bowdoin.

Matt Hikida ’22’s “Maybe, Will Be, Change” speech was selected as an alternate. Hikida’s efforts were recognized with the Second DeAlva Stanwood Alexander Prize. His talk explores the messiness of life – its unpredictability, its losses, and the mix of emotions we feel around it all.