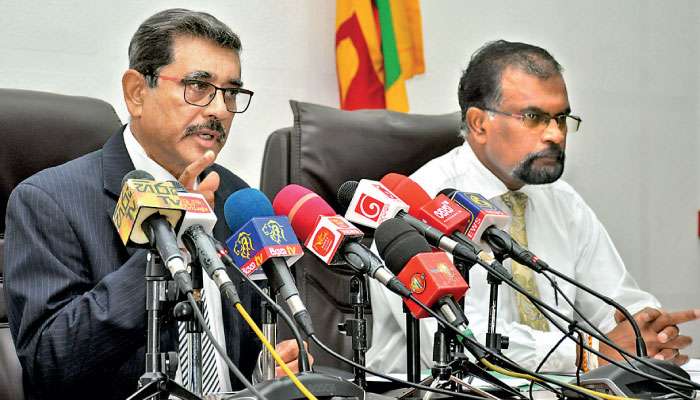 In announcing the “preventively negotiated” $51 billion default, which in other words meant a formal declaration of bankruptcy after notice to creditors, CBSL Governor Dr. Nandalal Weerasinghe (NW), said: “We have lost the ability to repay external debt. It has come to a point where debt repayment is difficult and impossible. We need to focus on essential imports and not have to worry about servicing the external debt”.

Treasury Secretary Mahinda Siriwardena started the blame game by scapegoating “recent events including the COVID-19 pandemic and the fallout from hostilities in Ukraine (to) erode Sri Lanka’s fiscal position”.

But long before NW was imported to lead CBSL to pick up the pieces from two years of destructive monetary and fiscal policies, both in support of an unrealistic vision of development ingrained in the minds of a triumphant president and bigoted, several experienced economists and central bankers warned him and his regime of the inevitability of bankruptcy unless these policies were reversed and IMF assistance immediately sought to restructure the bloated debt of the country and its financial difficulties. Their warnings fell on deaf ears.

Now that the inevitable has happened, the new finance minister, a close pal of the president, is playing a blame game. While the Treasury Secretary has made the pandemic and Ukraine a scapegoat, the minister, in an interview with the public television channel Hiru, singled out former Treasury Secretary Attygalle, the former governor of the CBSL Ajith Nivard Cabraal and the former secretary of the president PB Jayasundara as the main culprits who prevented asking for help from the IMF when, as he said, “almost all the ministers were in favor of this departure”. The three were “talking more about a homemade solution,” he added.

The Minister seems to have a short memory, as he had forgotten that shortly after Professor Lakshman was appointed Governor of CBSL on December 24, 2019, President GR hastily called a meeting with the Currency Board and instructed its members to help it implement “its” economic policies. , or vision to be more appropriate. After this meeting, he arbitrarily reconstituted this council by removing a few members who he thought were obstacles and bringing in others who would be affirmative. Governor Lakshman himself refused to go to the IMF and was talking about an alternative way to develop the economy. This path was the GR path, and the so-called local solutions were the rocks and pebbles laid out along this disastrous path. If anyone wants to blame anyone, it should be GR and his Viyathmaga cabal.

However, blaming anyone is pointless right now, as the reality of bankruptcy has started to hurt and needs to be faced. Bankruptcy imposes a heavy burden on society, and this burden would be borne disproportionately by ordinary people. The first international reaction came from Fitch, the reputable rating agency. It had lowered the business profile rating of the country’s largest commercial bank, Bank of Ceylon, from b/negative to ccc/negative. The risk profile, asset quality score and profit and profitability scores of this bank have also been lowered accordingly. This downgrade would obviously have flow effects on the soundness and viability of other banks as well. Leaving aside the technical details of this rating and other ratings associated with the care of financial experts and economists, what they imply in practice is further depreciation of the rupee. This would ultimately mean an escalation in the cost of living due to rising import prices and retail bazaar prices.

CBSL’s tight monetary policy would contribute to higher prices. The economy must produce and export more and more to import less and less. With political instability in power, it is doubtful that this is possible. In the end, it is ordinary people who would be forced to bear the bulk of the burden caused by this bankruptcy, and in which they were not a party. So that was what NW meant when he said things would get worse before they got better. The question is how much worse it would get and how long would it take to get better.

Given this bleak outlook, IMF assistance should come with stringent conditions. It remains to be seen whether the safety net that would be worked out between the IMF and the local negotiators will be enough to offer a modicum of comfort to the suffering masses. The IMF chief meanwhile warned that growth rates would fall throughout 2022 and 2023 in 143 economies that produce nearly 86% of global GDP. With such pessimism, a financially bankrupt country like Sri Lanka would need an honest government with pragmatic policies to manage the economy.

Can Sri Lankans expect this honesty and pragmatism from the current regime, whose reckless economic management, dishonesty and propensities for wasted spending produced the current situation in the first place? The nationwide public protests that have become everyday scenes answer this question in the negative.

Thus, economic reparation first requires political reparation. This is the dilemma the country is currently facing. Any compromise solution to be found between the current regime and the opposition seems unacceptable to an awakened generation of young Sri Lankans whose numbers have swelled the country’s age pyramid in the middle. They have rejected the Prime Minister’s call for dialogue and are ready to occupy the streets and the maidans until the regime gives up. Unless the political crisis is resolved, economic repair is still a long way off.

(The author is attached to the School of Business and Governance, Murdoch University, Western Australia.)