From legal customers to incoherent rants, outright lies, and completely irrelevant remarks, Yelp can suck a little at times. Did you know that people comment on the Pacific Ocean on Yelp? One person remarked that “it wasn’t the Atlantic Ocean”, and another said it was “stupid”. Oh good?

Yelper’s behavior was mocked in South Park season nineteen, though surprisingly there’s no way to rate this episode on Yelp (yet). There’s even a local podcast created by longtime bar professionals dedicated to reviewing Yelp reviews.

No one, it seems, is safe from potentially damaging keyboard warrior business consequences with a Yelp account — not even Denver’s generally friendly and laid-back beer scene.

Here’s a breakdown of some one-star reviews of local breweries, and what we can learn from them:

Aurora’s Dry Dock Brewing Company has been a Colorado mainstay for nearly two decades, but this person didn’t hesitate to give it the worst possible rating based on one little interaction.

Imagine standing in line at a busy beer hall on a Saturday and when the person in front of you is asked to provide a full name for a tab, they respond with “Anakin Skywalker” and then get upset when the bartender isn’t amused. . My God, that would be frustrating!

Lesson: When a bartender asks for a name on a new tab, just give them your full name. It should be pretty straightforward, whether you’ve visited thousands, hundreds, or even zero breweries already. Leave the star wars jokes for game night. 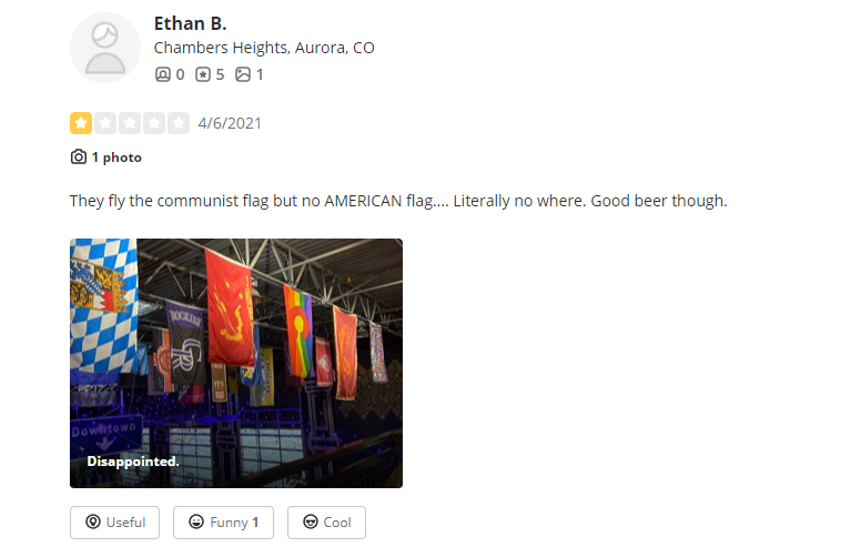 Flying the flag for another top local brewery? A star.

The next one-star victim is Bierstadt Lagerhaus, winner of the Westword Best Taproom 2022. Bierstadt is known for making some of the best lagers around, but this review is more about the decor.

For those unfamiliar, the flag referred to represents the notable local brewery Comrade Brewing, with which Bierstadt has collaborated on several occasions. At least Ethan liked beer.

Lesson: Focus more on the beer than the flags. Or if you focus on the flags, take the time to really look at them. There is a Colorado flag next to the Communist Flag of Comrade Brewing, for example. There’s also a Rockies flag, which is fine with us even though we’re still a little sour about the Nolan Arenado trade last year.

The next reviewer didn’t even try the beer. Instead, they wrote a goofy little rant about big people and metal music. This description of Denver’s Black Sky Brewery, known as a metal brewery, reads like something straight out of Hunter S. Thompson. Fear and Loathing in Las Vegas.

Lesson: Do less drugs before entering a brewery? It’s really hard to understand what was happening to the Examiner that night. You are no longer in Bloomington.

If you only want samples that are also available for takeout, let the server know your intentions ahead of time.

This review for Locavore Beer Works reads like a minor, avoidable accident. It’s that common type of one-sided review that contributes to Yelpers’ bad reputation. The client knows exactly what he wants, but fails to communicate it and gets upset with the server when things don’t go perfectly.

Lesson: Of course, many attentive waiters will notice an empty growler and associate the sample order with that growler, letting you know what’s available to take away in case you want to line it up with your samples. Many breweries will simply list what’s available for takeout on their menu (it’s unclear if Locavore did). But if the brewery really failed to do those two things, all the customer had to do was ask what was available to take away. The customer is just as lax as the waiter, but the brewery ends up here with a one star rating, for a very minor infraction.

Coleslaw is usually made with cabbage, so it may taste like cabbage.

This one star review for Oskar Blues Brewery in Longmont is quite breathtaking. The service is excellent, the food ordered was good and the beer was great.

Lesson: If you ask the waiter for his opinion, and he not only tells you that the menu item you asked for is poor, he even gives you a free sample, directly improving your experience (otherwise “good beer and good food” ) , consider assigning more than one star to the establishment.

peter newman’s sculpture in london encourages contemplation of the sky