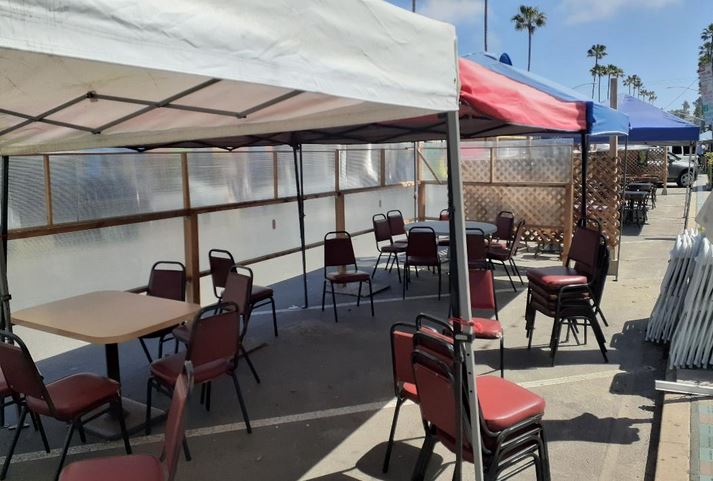 Called “Spaces as Places,” supporters say it will allow outdoor spaces for dining, walking, biking and other activities, and will provide means for temporary outdoor structures to become permanent facilities.

The board vote was 6-2 in favor of the program, with Sean Elo-Rivera and Joe LaCava opposing; Chris Cate was absent.

The program will enter into force 30 days after the second reading of the ordinance by the city council, expected in November. Before taking effect at Ocean Beach and other beach communities, the program must be approved by the state’s Coast Commission.

According to a NBC7 Report:

Earlier this year, city employees began collecting feedback from community members and business owners on the benefits of the program. Staff then defined the location, design and permit requirements to continue using the outdoor spaces. They also designed a manual for streets, active sidewalks, walks, and alfresco dining on private property. …

On August 4, 2020, the council approved an emergency ordinance authorizing temporary foreign business operations in emergency response to the COVID-19 pandemic. This allowed businesses to dine al fresco in the public right-of-way to allow catering establishments to continue operating when indoor operations were limited due to public health orders.

In May, city council extended the effort until July 13, 2022. Spaces as Places was designed by the city’s planning department and aimed to move temporary spaces from an emergency response to a permanent program with established design and safety standards.

It seems certain that the Council will approve this program.

Lori Weisberg at the SD TU had this to say:

A one-of-a-kind program in San Diego, the new alfresco dining regulations will allow restaurateurs to extend their outdoor seating on sidewalks, and in metered and unmetered parking spaces in front of their premises as long as they pay a fee, a requirement that so far has not been imposed.

Spaces as Places, as the program is known, will go into effect next July when the current program expires. It will include a number of design and safety rules that will allow restaurants to install platforms to sit along unpainted, yellow or green borders, provided they are at least 20 feet away. an intersection, a street corner, an alley or a driveway.

Such alfresco dining, however, will not be permitted along red, blue or white borders or in an alleyway. They will also be restricted to streets with speed limits of no more than 30 miles per hour, an aspect of the new ordinance that has sparked differences of opinion among council members.

When this program was announced, OB Rag opposed it as a gift to private companies of our public commons, sidewalks, roads and public space. No consideration of this nature was made by board members in their eagerness to create an outdoor dining experience for patrons and visitors.

Last July, we sounded the alarm bells about the program:

It’s not billed as a “sale,” but it really is. The city of San Diego is preparing to sell the public spaces, sidewalks and parking lots that restaurants used during the pandemic – to these companies. This is called a “fee”, but it is more like a sale or a rental.

Of course, on the surface it all feels cold. These struggling restaurants need a break – they provide jobs and food for locals and tourists.

But why is the city considering making the extensions “permanent”? The initial permits for the expansions have already been extended for one year just recently. So why can’t they be extended every year with nominations? Why do they have to be permanent?

As a platform for Ocean Beach and beyond, the OB cloth has always and historically kept our public space, our common goods over the years. The commons are for the people, the public – it is a space in which everyone is allowed to be, by law, by tradition, it is a civic right. The private encroachment into this space deserves our attention and consideration.

The Cloth criticized local OB businesses for encroaching on public space, and we were able to get a restaurant to reduce its dangerous encroachment.

Then came the pandemic – and most of us applauded when restaurants were allowed to grow to survive. We have seen, and rightly so, structures, awnings, plastic – even surfboards – rise and invade the space that once belonged to the public. In many cases, private enclosures have been created where we were once invited without having to pay for a meal and drink.

Yet what do community residents and other businesses think that aren’t takeout space restaurants? Parking issues were real in the days leading up to the pandemic, and businesses were relying on customers to find parking nearby. So are the customers.

Of course, there’s the concept that was popularized during the pandemic of making shopping areas like Newport Avenue completely car-free – but that still doesn’t have to include the loss of public space.

If the outdoor dining expansions are made “permanent” for a lease, or a fee, or even “tax”, or whatever you want to call it, this is really a sale of our public space. It’s called privatization, private use and profit from what was public.

People already knew spaces were places and have been lobbying the city for years to modernize and improve these public spaces. No more trees, no more benches, no more streetlights that worked and weren’t spying on you. Now the city wants to sell all that space for the people so they can finally make these improvements that people are asking for.

Now that it looks like this will be the “law,” residents and other business owners will have to adapt. Our concerns are still valid, but the tide is against them.