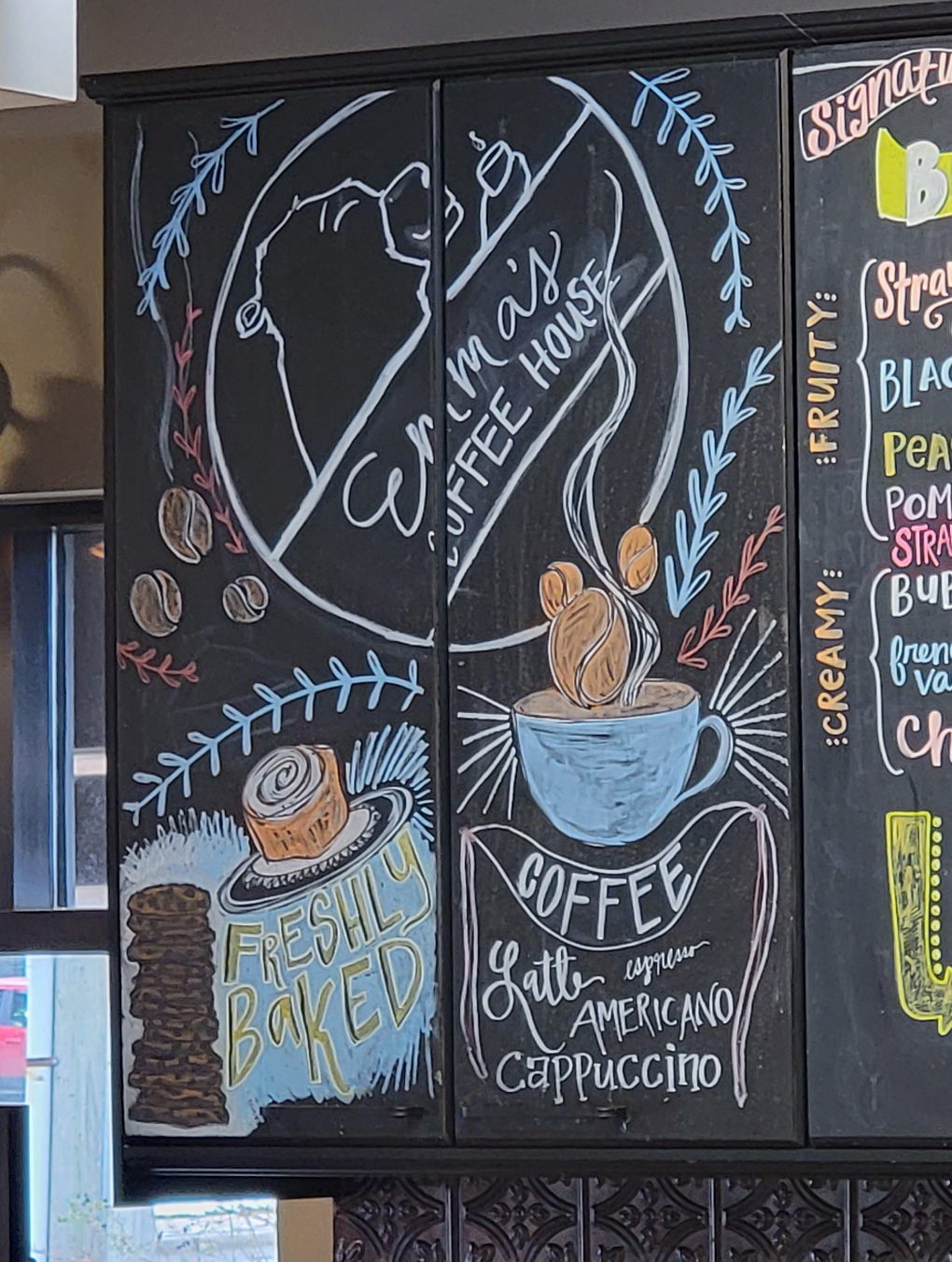 The weather was a bit indecisive, the weather was overcast, a little chilly and I wasn’t particularly hungry, but I had a task to do as it was time for Grabbing Grub.

The overall dark nature of the day made me drag my tail and if I was going to pretend to do something for the day I needed a pick-me-up. Luckily Emma’s coffee is only a stone’s throw from the Tribune office and some strong java with a shot of espresso was exactly what the doctor ordered.

If you haven’t been to Emma’s, you’re missing out. The chalkboard art motif begins when you walk through the door and are greeted by a sandwich panel proclaiming “Running Caffeine and Christmas Joy”. The motif continues behind the counter with a chalkboard menu starting with Emma’s logo with a bear whose bent isn’t honey, but rather a steaming cup of coffee.

Emma’s has a seemingly wide selection of bubble teas, if you’re the type to love them, ranging from fruity to creamy in two different sizes. The menu then turns into breakfast sandwiches which are available until 11 am, followed by â€œbaked goodsâ€ like cookies, apple fritters, cinnamon rolls, and more. The two things I immediately noticed on the menu were the sticky pecan buns and the “soup of the day”. However, I knew I needed a little more substance.

I jumped on the variety of real fruit smoothies, as well as the coffee, tea, and espresso menu because I’m not very fancy there, and set my eyes on the sandwich menu.

The property’s sandwiches come half or whole with five options to choose from – Cuban, Roast Beef, Italian, Turkey & Bacon, and Vegetarian and if you’re a regular reader you know I usually leave the greens to the rabbits.

When I asked the barista what the soup of the day was, I was presented with a little challenge, as I learned it was clam chowder – one of my favorites. However, there was no well cut sandwich to go with it. While I was tempted by Cuban and Italian, I decided to go for roast beef instead, as it wouldn’t be a usual choice for me.

Once my lunch was settled, I had another challenge. For years, I’ve listened to Mountain Dew-fiend and Tribune editor Eric Young complain that he should find a way to learn to enjoy coffee. Lucky for me, I had an expert on hand to help me find a potential bridge for Eric, and that bridge had to be heavy in sugar and light in coffee. Emma’s barista, Eliza, told me I needed a latte and I opted for a mocha.

Although Emma had seats available, I chose to grab and go, and returned to the office with my food and drinks in hand – a large, home-roasted coffee with a shot of espresso, a small mocha latte, a cup of clam chowder and the roast beef panini.

The coffee had a lovely earthy flavor which was enhanced by the richness of the espresso. The clam chowder was very rich and creamy, and I was glad the chowder wasn’t thickened, which made it even nicer when I threw in a few packets of the oyster crackers. It didn’t take long for me to finish the cup and move on to my sandwich.

The first thing I noticed when separating the two halves of the sandwich was the thickness of the roast beef. The menu advertised juicy, which it sure was, and the juices were topped with horseradish mayonnaise. The sandwich consisted of two thick slices of fresh bread, with a bunch of thick sliced â€‹â€‹roast beef, sharp cheddar cheese, and fried onion strings. The combination of flavors has been enhanced by a buttered and toasted bread. I ordered a whole sandwich thinking I would take half of it for tomorrow. However, after I started eating it, I didn’t want to stop.

By the time I finished my soup and my sandwich, I was starting to get pretty stuffed, but I hadn’t made it to the star of the show yet. When I opened the box and saw the sticky roll, I was absolutely beside myself. The roll was topped with a mountain of pecan chunks and drizzled with a gooey topping. On my first bite I noticed that unlike some sticky buns I have had in the past, the mixture was not close to the candy stage and instead had a more syrupy texture which combined well with the cinnamon between layers. The roll was thick and fluffy, a great corner with two gold edges. If it hadn’t been for the coffee I used to wash it all off, the sticky roll would have been the last straw that put me into an eating coma.