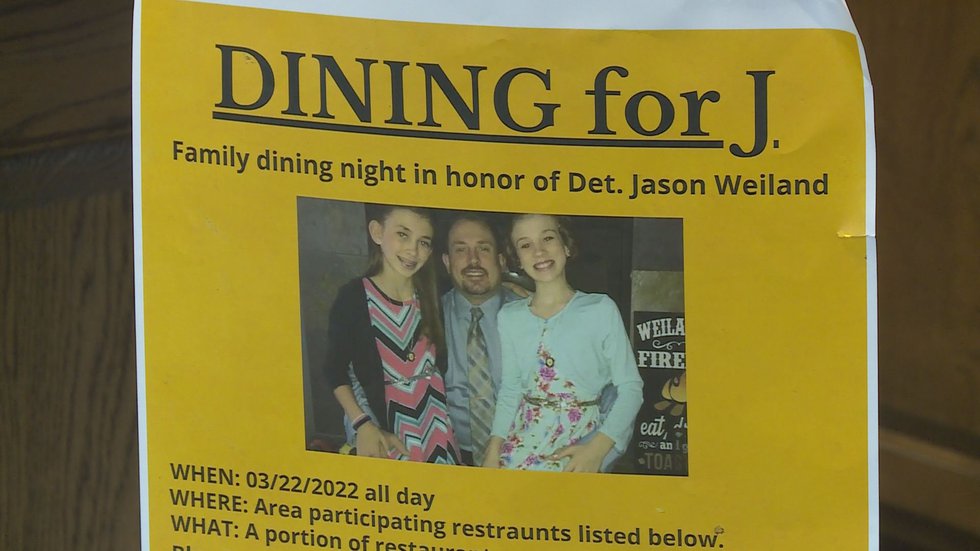 SCHOFIELD, Wis. (WSAW) – Restaurants in the Wausau area are helping to remember the life of Everest subway detective Jason Weiland. They are organizing a fundraiser in his honor.

The fundraiser was called “Dining for J.” There were 12 area restaurants participating, including Eagle’s Nest in Schofield.

They raised funds to support law enforcement while keeping Det. Weiland’s memory alive. Det. Weiland was killed in the line of duty that day.

“We had four incredible people in our community who lost their lives,” Det. Weiland’s widow, Kara Weiland, said.

March 22, 2017 is a day that residents of the Wausau metropolitan area will never forget.

“To know that the community is still supporting us all is really awesome. To know five years later that they are not forgotten and all these things are moving forward,” Weiland said.

“I really think the families of all these people need the support of the rest of us and this is another way to help them deal with this,” Eagle’s Nest owner Melissa Koester said.

There were 11 other restaurants that participated in ‘Dining for J.’ The fundraiser was inspired by Det. Weiland’s passion for being with loved ones.

“Jason loved having his Sunday dinners with his family, going to his mom’s house and having dinner and spending time with his siblings and his parents and having the nieces and nephews there,” Weiland said.

Groups that benefit are the Northcentral Wisconsin Riders and Blue Hearts. Both are meant to honor fallen officers and help their families. They want to be remembered for all officers in towns, big and small.

“It also gave us the opportunity to see that we’re not a big community, but we’re big enough to have a lot of support,” said Wausau Patrol Officer Matthew Grover.

Officer Grover said the other participating restaurants were also very busy on Tuesday. They would like to thank everyone who came to support them.

Alexander Smalls raises awareness of the diversity of African cuisines