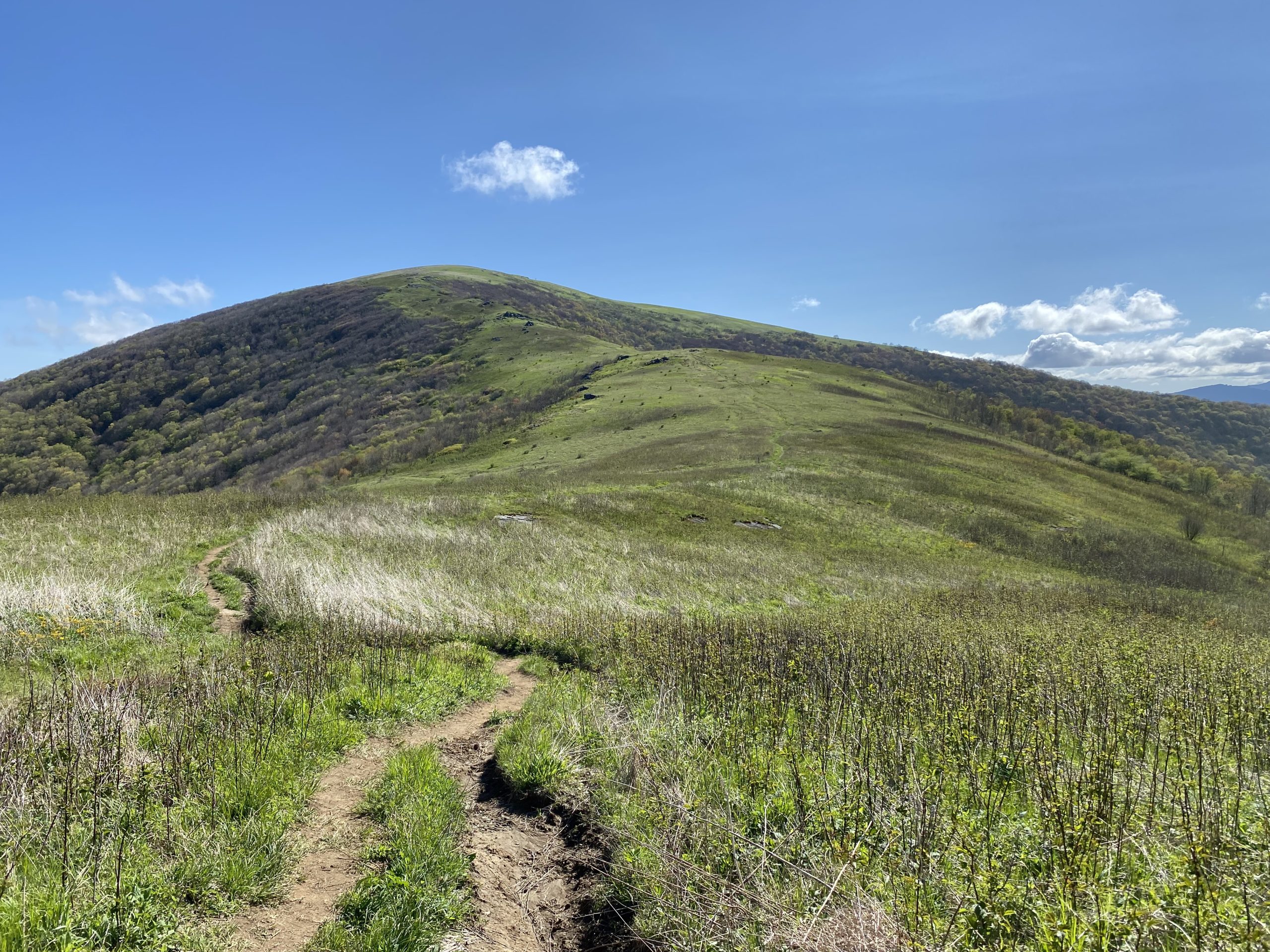 It was a chilly morning, so I saved my puff until I warmed up after the climb and the sun spots. The four miles flew by and soon I was at Indian Grave Gap. There I was greeted by my mother’s cousin Pam and her father Jimmy, who is my late grandmother’s brother. Pam recognized me right away, saying I looked a lot like my mother. Pam’s husband, Doug, has hiked many sections of the TA and was familiar with the shelters and other places I mentioned. So exciting to meet a family that I have never met before!

Doug drove us to the Yee-Haw Brewery in Johnson City. The brewery is housed in a former train depot with White Duck Taco Shop. We sat in their large terrace, enjoying the sun and the pretty town center. I had my first Tennessee hard cider and some tasty tacos. Jimmy and Pam told me family stories. Jimmy is quite eloquent for a 90-year-old man! Then Doug drove us to the top of a hill and pointed out all the mountains I will be climbing on my way to Damascus.

I was looking forward to taking a shower and doing the laundry. Turns out, socks that stay damp on your feet for days smell funky.

In the evening, Pam, Doug and I went to the Italian restaurant Bella Vita, a nice local establishment. The eggplant parmesan was utterly delicious and the quiet surroundings made for easy conversation. Jimmy came after and we watched an old western, The Professionals. I had fun tossing a toy mouse for their cat and got tired before the movie was over.

Doug, Pam and Jimmy all accompanied me on the track this morning. I’m so glad walking the trail gave me the opportunity to meet them. They told me to let me know if I needed anything as they are close to Damascus.

It was a quiet track day. I listened to an audiobook on and off and met a few hikers I knew, but very few overall. My favorite part was the wet and mossy green forest that covered Unaka mountain. I stopped at the Cherry Gap Hut for lunch and a section hiker named Tinker played me a fun song on his guitar. It was a song he wrote on a northern part of the trail.

Yesterday I picked up a resupply box sent by my brother-in-law’s mother. The variety of food made my day. She sent over a bunch of snacks that aren’t in any of my boxes: homemade GF oatmeal caramel cookies, PB&J bites, rice krispy candies, sunflower seeds, and almond flour crackers. Biting into a delicious cookie surrounded by woods and birdsong was such a treat.

I set up camp in a beautiful spot among the maples with a spring nearby. My first night camping AT with no other people nearby, or so I thought until three guys showed up late. It was my longest day, 16.8 miles, with a full load of food. 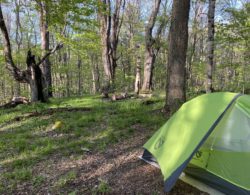 The day took me over 6,000 feet for the first time since the Smoky Mountains. It was a mostly all morning climb, but I didn’t mind. This usually means a good vantage point is in front of you! Following the advice of a traveling dietician, I snacked every 60 to 90 minutes. I have been doing this for several days now and it keeps my energy levels high.

I had lunch at the Roan High Knob hut. At 6,275 feet, it is the highest shelter in the AT. I was hoping for company, but no one was there, so I had fun exploring the area around the refuge and reading the Thru-Hikers’ Companion guide. I heard of Grassy Ridge. It’s not on the AT, but is accessible via a side trail and offers a natural 360 degree viewpoint over 6,000 feet Natural as opposed to Clingman’s and Mt. Washington which both have structures at the top.

Grassy Ridge was totally worth the detour and the extra climb. In fact, after Carver’s Gap the trail was awesome all the way to the ridge. It stood out like a brown ribbon that ran up and down the grassy hills and offered some striking views. 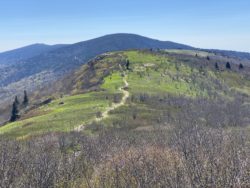 I had the company I was looking for in the evening. While having dinner at the Stan Murray hut picnic table, I chatted with a group of section hikers and another hiker. A section hiker, Siesta, crossed the PCT heading south. He had great stories about the trip and the areas he had explored all over the country.

It was a magical track morning. I walked through green woods, the sun was shining through the branches and the birds were singing. The chipmunks ran along the highways of fallen trees. Every step made me feel alive and grateful.

The magic continued as the trail took me over the grassy balds of Little Hump Mountain and Hump Mountain. Each offered breathtaking views in all directions. Occasionally piles of lumpy black rocks protruded from the bright green grass. I watched a few birds soar in the nearly cloudless blue sky. The descent of Hump Mountain brought me to Doll Flats and I said goodbye to North Carolina, having oscillated between it and Tennessee from the Smokies. 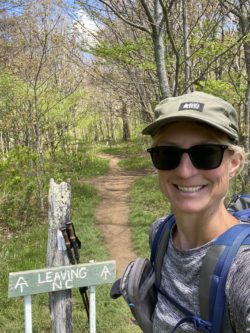 I had lunch beside a gurgling stream. In a shallow pond I spotted a bunch of small fish facing upstream and a crayfish. I have a weakness for crayfish as I have kept several as pets. The afternoon took me past the remains of a stone building, a cemetery and the 400 mile point. Yippee for a new stage! 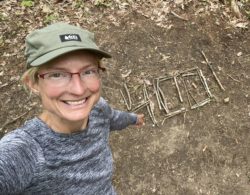 I did a 20 mile day trip and stopped for the night at the Mountaineer Falls Hut. It contained three (deluxe) levels, although the lady I shared the second level with said there were spiders in the upper attic. Ouch! The kitchen area was great. A bench and a narrow table built between the two front posts, overlooking the forest. I tried to cook quietly because there were three guys sleeping. It was only 7pm but some people go to bed early on the trail.

This website contains affiliate links, which means The Trek may receive a percentage of any product or service you purchase using the links in articles or advertisements. The buyer pays the same price as they otherwise would, and your purchase helps support The Trek’s ongoing goal of providing you with quality hiking advice and information. Thanks for your help!

To learn more, please visit the About This Site page.