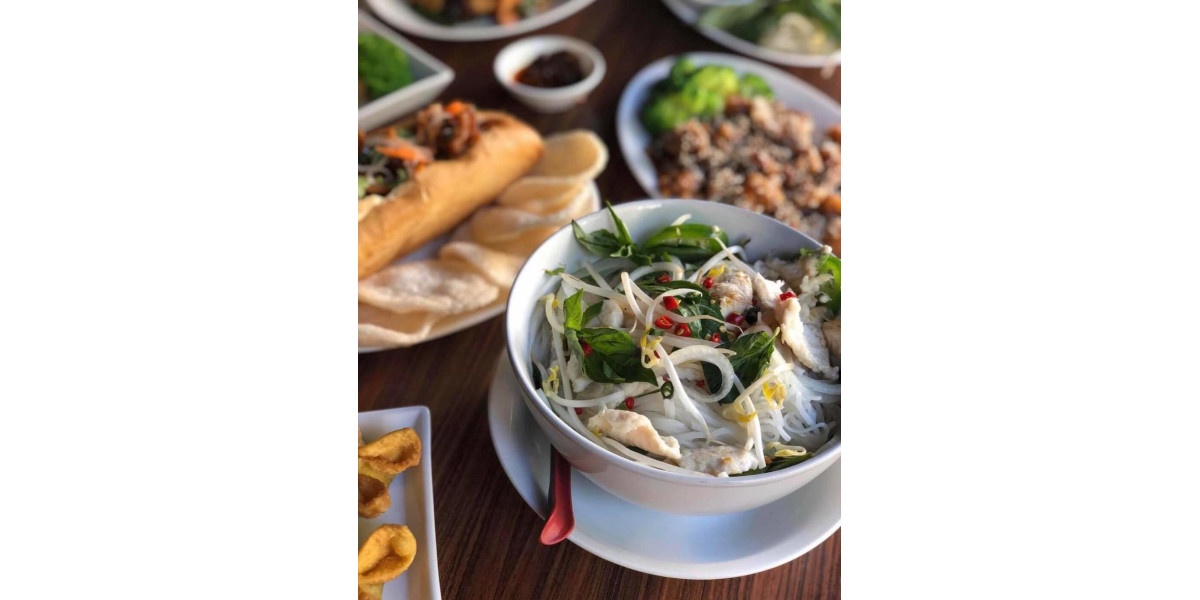 Family recipes and heritage at House of Lu

House of Lu has been serving authentic family recipes for nearly three decades; let that sink in for a moment. This gives them the distinct recognition of being one of the oldest restaurants in Marietta Square. They have endured over the years for good reason. Cindy Lu and her parents were born in Saigon, Vietnam, but are one hundred percent Chinese, so the menu is a fusion of the two cultures. Cindy’s mother, known to regulars as Mama Lu, opened the place in 1995 with a passion for serving food from their lineage. She considered selling the business in 2008, so Cindy left the North East to preserve her family’s legacy.

In 2014, they completed an utterly stunning renovation, which local interior designer Cassandra Buckalew carefully thought out, and construction was completed in a record time of just one month. Upon entering, the large, brightly colored murals on either side of the restaurant immediately catch your eye. Each panoramic painting represents Vietnamese and Chinese culture by depicting a pretty lady eating noodles on one wall and a dragon lady on the other. The eye-catching circular bar in the center of the space illustrates the Yin-Yang concept that everything in life is looped. Once seated, the dining area is alluring and has a very upscale and elegant vibe.

Placing your food order can be tricky, but in the best way, as there are so many options made from scratch. I would suggest starting your meal with the succulent handmade steamed pork balls which are fork tender or try the crispy vegetarian spring rolls. Once you’ve taken a bite, you realize the pride of the kitchen staff who create them by hand every day. Vietnamese Pho soup is delicious and contains a beef bone broth that is simmered for many hours and served with rice noodles and your choice of several proteins, some of which are rare round steaks, chicken or shrimp. This fragrant blend is deeply comforting and feels like a big, warm hug. If you’re craving traditional Chinese food, order the ever-popular Mongolian Beef or if you want a little spice in your life, have the Hunan Chicken dish and you’ll thank me later. The friendly servers are attentive and knowledgeable about the menu and can point you in the right direction if you’re undecided.

Don’t sleep on their cocktail program, and if you’re lucky you might get Cindy’s husband Johnny Tam as your mixologist. Serve classics such as a cosmopolitan and a martini, along with mango and lemon martinis for an exotic twist. Try something different, like a don’t hanoi me Iced tea made with Bacardi Dragon Berry rum or a Ming Dynasty based on Absolut vodka, Blue Curaçao, Soho Lychee Liqueur and Cream De Violette. Johnny is a character who always has a witty joke or funny story to share with bar patrons while he whips up your drink.

Food Network chef Alton Brown lives in Marietta and frequents House of Lu for its high-quality cuisine. Be sure to look for his likeness on a signed magazine cover hanging on the back hallway wall. Next to the main dining room is a large party room that you can reserve for any type of celebration you can imagine. They will be busy with the Chinese New Year fast approaching on February 1, centered on shedding the bad and the old and welcoming the new and good things in life. I think we can all agree with this idea!

You may see other House of Lu restaurants in town, but be aware that this establishment is not affiliated with them and is the original and only one with the Lu family recipes, which are made with an ingredient special…a dash of love.