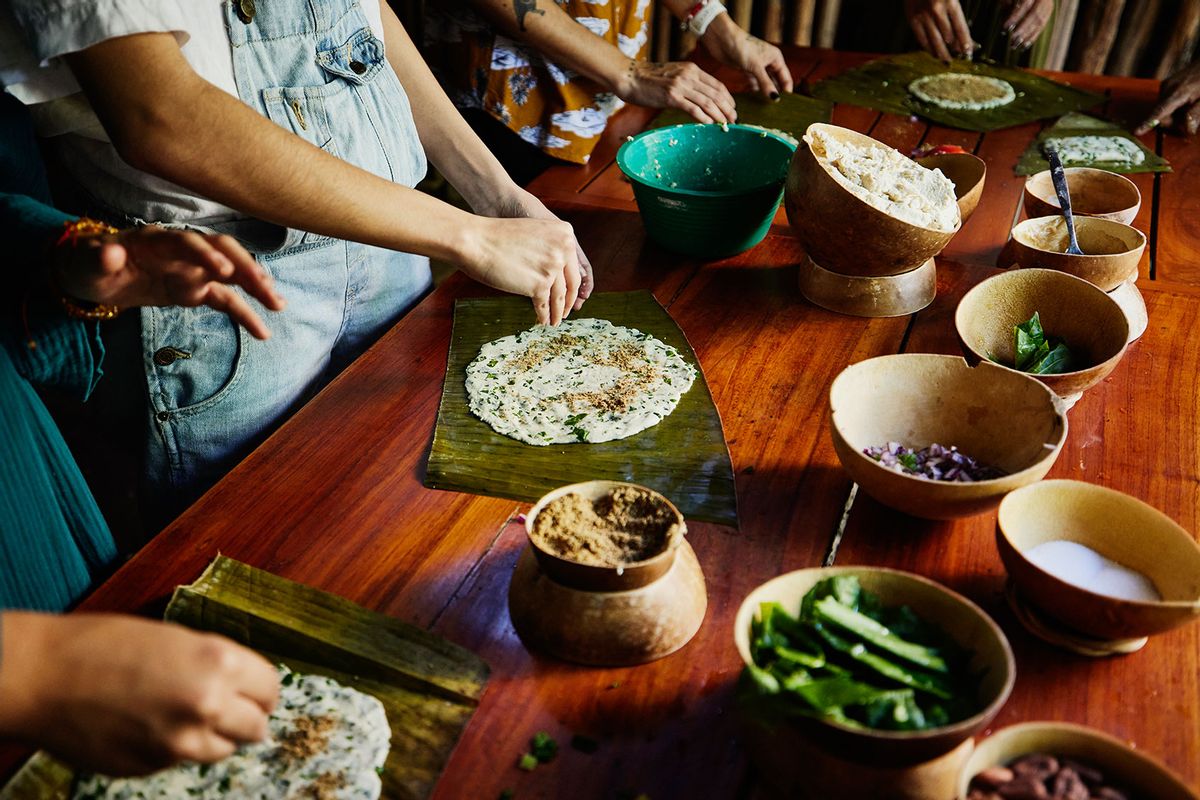 For the love of Mexican cuisine: revisiting “Like Water for Chocolate” on its 30th anniversary

The scene where Pedro is mesmerized by Tita’s dangling breast as she hovers above a metate, a native grinder, accustomed to pulverizing almonds and sesame seeds for his turkey mole, has stayed with me for over 20 years. I was a preteen and probably too young to watch “Like Water for Chocolate,” a film based on Mexican writer Laura Esquivel’s 1989 book. At the time of its release, it was the highest-grossing foreign film in the United States. To this day, it remains in the top 10 highest-grossing foreign films.

The film left an undeniable mark on me. As a child, I didn’t have the words, the experiences or the range of emotions to understand what the two felt – but I knew I wanted to feel the passion of a love so intense that the possibility of a thousand worlds erupt when you close your eyes with someone you love. I recently rewatched the movie for no other reason than to be swept away by the power of love. What I didn’t expect was to find a thoughtful tribute to Mexican culture, to the power of cuisine and the emotions it provokes, which are akin to love.

In 1992, the year the film was released, Mexican restaurants received neither Michelin stars nor James Beard awards. “Like water for chocolate”, showcased the complexity and sophistication of Mexican cuisine. , La Guelaguetza in Los Angeles and Tzuco in Chicago. It’s a rich and groundbreaking piece of cinema that examines cultural and gender politics through a story of food.

The story revolves around Tita de la Garza, a young woman from Rio Grande, who, due to bad luck, is not allowed to marry. Family tradition dictates that the youngest daughter of the De La Garza family should take care of her mother until her death. When Pedro, a handsome local boy, arrives to ask for Tita’s hand in marriage, Elena, the matriarch, rejects his request and instead proposes Rosaura, her eldest daughter, as a bride. Pedro accepts the union. He justifies his actions with the belief that marrying Rosaura at least allows him to live in the same house as Tita, thus being close to his one and true love. The story unfolds with these two lovers grappling with the consequences of this decision and the enormity of their feelings for each other.

Under the tyrannical watchful eye of Mama Elena, Tita struggles to quell her feelings for Pedro and live up to the high standards of a respectful and diligent Mexican girl. But the matriarch doesn’t underestimate Tita’s power to communicate her feelings through food. Tita gets to work preparing the wedding feast for her sister and her lover. The meal for 180 guests – a chicken capon, where a rooster is castrated and fattened up before slaughter – is symbolic of the two lovers living the life intended for them and sacrificing themselves for the greater good. Tita spends the entire meal prep engulfed in her grief, crying while mixing the cake batter for the meringue wedding cake. Nacha, the house cook and Tita’s confidante, urges her to shed all her tears before the wedding and sends her to bed. Nacha dips a finger in the mixture to see if the salt from Tita’s tears has changed the consistency or the taste. The taste doesn’t seem extinguished, but almost immediately Nacha is overwhelmed with a sense of longing for the love of her youth and sadness for what could have been and never was.

Just before the guests sit down to eat and celebrate Pedro and Rosaura’s union, Pedro whispers declarations of undying love to Tita. Tita’s mood changes and she leaves the party as the wedding cake is served in order to share the news with Nacha. As the guests consume the prepared dessert amid Tita’s pain, nausea and grief overwhelm the entire group. Guests roll in vomit and tears as they feel the manifestation of the leader’s deepest pain, formed during creation. Tita finds Nacha dead, holding the photo of an unrealized love.

Tita’s life and destiny may be controlled by her mother, but through her mastery of cooking, she is able to break free and bring others into her world. She fights. Not with words or weapons but with champandongo, a hearty casserole made with ground beef, pork, corn tortillas, queso manchego, mole, dried citron and walnuts. When Rosaura seeks to uphold the cruel family tradition of forbidding her only daughter to marry, Tita’s anger is channeled into what can only be described as a curse. Rosaura becomes a smelly ball of flatulence and bad smells which ultimately leads to her death – freeing her daughter Esperanza to do as she pleases. The oxtail soup brings Tita out of her selective silence.

The film’s most iconic dish is quail with rose petal sauce made with the petals of a bouquet that Pedro gives to Tita. When Mama Elena asks Tita to get rid of the flowers, Tita gets creative and reuses them in the evening meal. Her excitement and desire to have received this sign of affection from Pedro is channeled into the dish. When Tita’s other sister, Gertrudis, consumes it, she is overwhelmed by a heat wave of desire. Fire radiating from within his body engulfs the outdoor shower in flames and attracts the attention of a revolutionary on horseback. He climbs up and sweeps Gertrudis naked. Tita and Pedro’s passion for each other is transmuted and consumed by these two surrogates. Thanks to Tita, Gertrudis finds love, escapes her mother’s authoritarian control and continues to live a life that belongs only to her.

Tita makes the deepest cuts, the biggest impact, and the most healing through food. Through various dishes, she expresses her desires, her hopes, her pains, her frustrations and her desires. Only those who can live without eating can avoid the power she holds. The book the film is based on begins each chapter with a different recipe and advice on how best to produce them. In the age of digital influencers and bloggers, recipes are just waiting to be turned into a journey of self-discovery.

The possession of love, like a good meal, does not last long. But the memory of it and the potential to taste it again inspires people to devote their whole lives to its search. “Like Water for Chocolate” is the rare film that gives you a burning desire to experience everything you see on screen – love and delicious delights. It’s a story that blends indigenous culture, Mexican cuisine and a love story into a sophisticated tale of Mexican identity. At a time when Mexican cuisine was narrowly defined as tacos, enchiladas, and burritos, Esquivel showed us it was so much more than that.