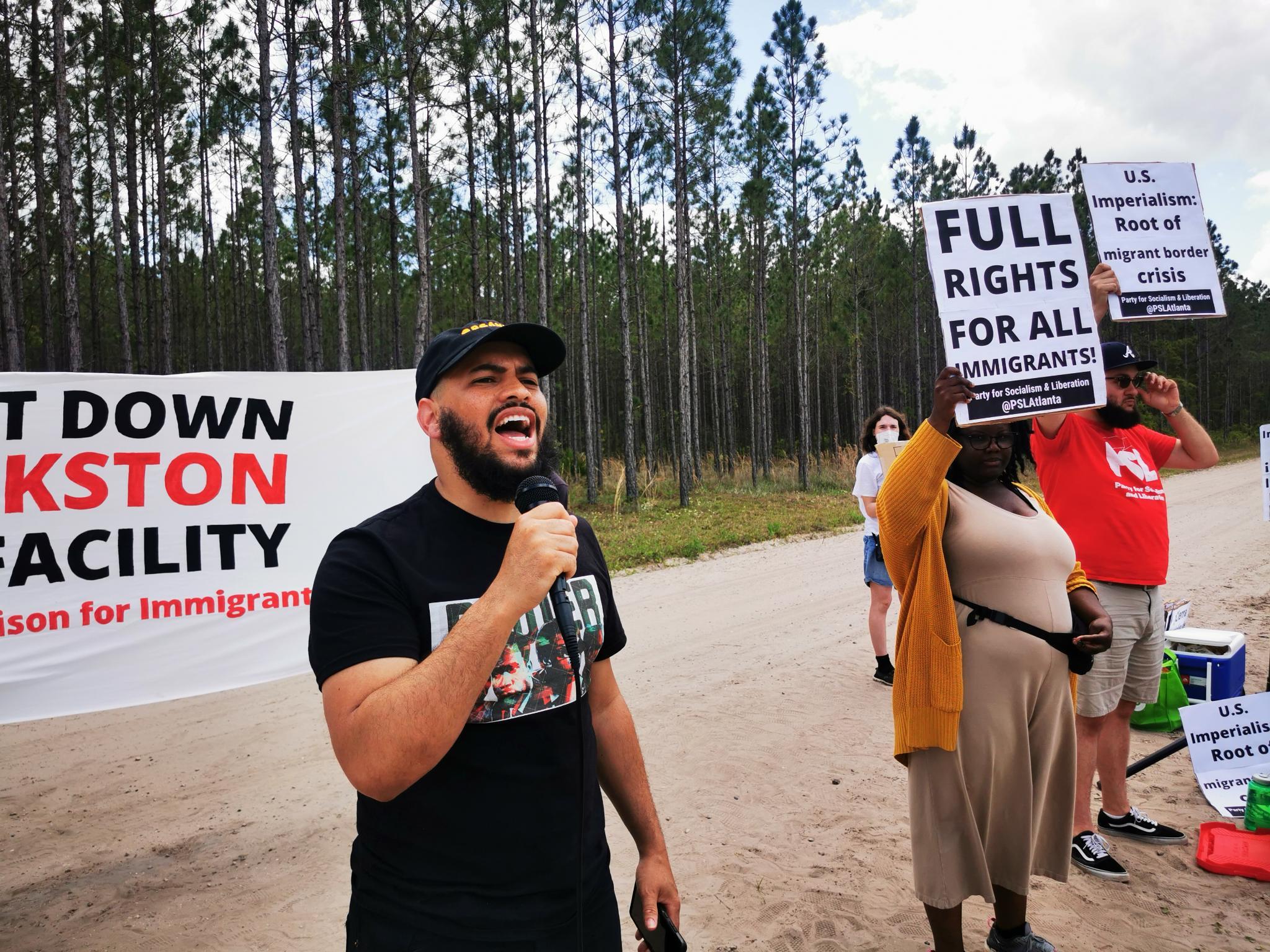 On April 24 – inspired by the heroic resistance of inmates who had gone on hunger strike on April 18 – a solidarity demonstration was organized outside the Folkston ICE Processing Center in Folkston, Georgia by the Shut Down FIPC campaign.

Acts of resistance by detainees inside the facility – which is set to become the nation’s largest ICE detention center – surged last week following their participation in an April 16 rally by the countryside. For hours in the B4 prison yard, protesters and inmates shared stories and chants, albeit separated by layers of chain-link fencing and barbed wire.

In retaliation for their participation in the April 16 protest, GEO guards began feeding detainees spoiled food, and placed some detainees in solitary confinement, detainees told family members and coalition activists. Many have also been denied any communication with the outside world. The 60 detainees in unit B4 started a hunger strike on 18 April. Campaign organizers learned on April 21 that inmates in the facility’s C4 unit were also engaging in a strike sit-in.

The hunger strike sends a powerful message to those in power: despite everything, in the most difficult circumstances, people will unite across nationalities and fight injustice.

On April 24, many protesters traveled for hours to attend the emergency solidarity rally in Folkston. This time the prison yard was empty – the guards had locked the inmates in their units. However, a few inmates in Unit B4, where the hunger strike began, waved and knocked on the window of the courtyard door, acknowledging the presence of protesters outside.

Natalie Villasana, organizer of the Shut Down FIPC campaign, spoke on the microphone to the incarcerated immigrants: “Immigrants are not criminals, immigrants are welcome here. If Biden is going to backtrack on his promises that he uses to get votes, then we’re going to expose him. We will continue to fight and build an independent movement to shut down this torture center. »

The Democratic Party establishment and President Joe Biden, who signed an executive order to phase out the use of private prisons through the Justice Department but have yet to extend it to detention centers across the country. ICE, continue to obscure their pivotal role in the human rights escalation. abuses against immigrants and asylum seekers across the country.

Nima, an Iranian Socialism and Liberation Party organizer, spoke passionately about the role of US imperialism in creating the immigration crisis. He said: “It is a legacy of colonial exploitation. The US government has deindustrialized these peoples’ homelands, bombed these peoples’ homelands, supported paramilitary and fascist coups, and now people are fleeing the violence caused by imperialism.

A group of inmates stood near Gate B4 and listened to protesters’ chants and speeches and responded with whistles and raised fists. Although not without great difficulty, protesters outside and inmates inside were able to communicate periodically through the window.

Julio Gutierrez, a 32-year-old Mexican immigrant, heard the protesters apparently through the ventilation of his cell window. He was able to jot down an organizer’s phone number before quickly calling and explaining his situation inside.

“I’ve lived in this country for 18 years, but a few months ago they put me here for driving without a license,” Julio said over the phone. He also told organizers that some people have already been deported, yet ICE continues to hold them indefinitely. Detainees demand rapid processing of their file. Julio also explained that the B4 inmates ended the hunger strike on Thursday, April 21.

Another inmate named Saúl shouted at protesters through the thin window vent that he had been detained for many years and that “[GEO Group] took everything from me: my family, my health and my money… now they are trying to kill me! Saúl went on to explain that many inmates are so sick from not eating that they cannot even cry out to express the atrocious conditions.

The demonstrators made their gestures and voices heard loud and clear: they raised their fists in the air shouting “Te Oimos! You see! No estan solos! and “We hear you!” We see you! You’re not alone!”

Folkston ICE Processing Center, an ICE public-private partnership, and their private operator-partner GEO Group, entered into an agreement in December 2021 to expand the facility by an additional 3,000 beds, making it the largest ICE facility ever. of the country and more than half the size of the population of the city in which it was built. The campaign to shut down the FIPC aims to stop this expansion and mobilize workers to shut down the inhumane facility once and for all.