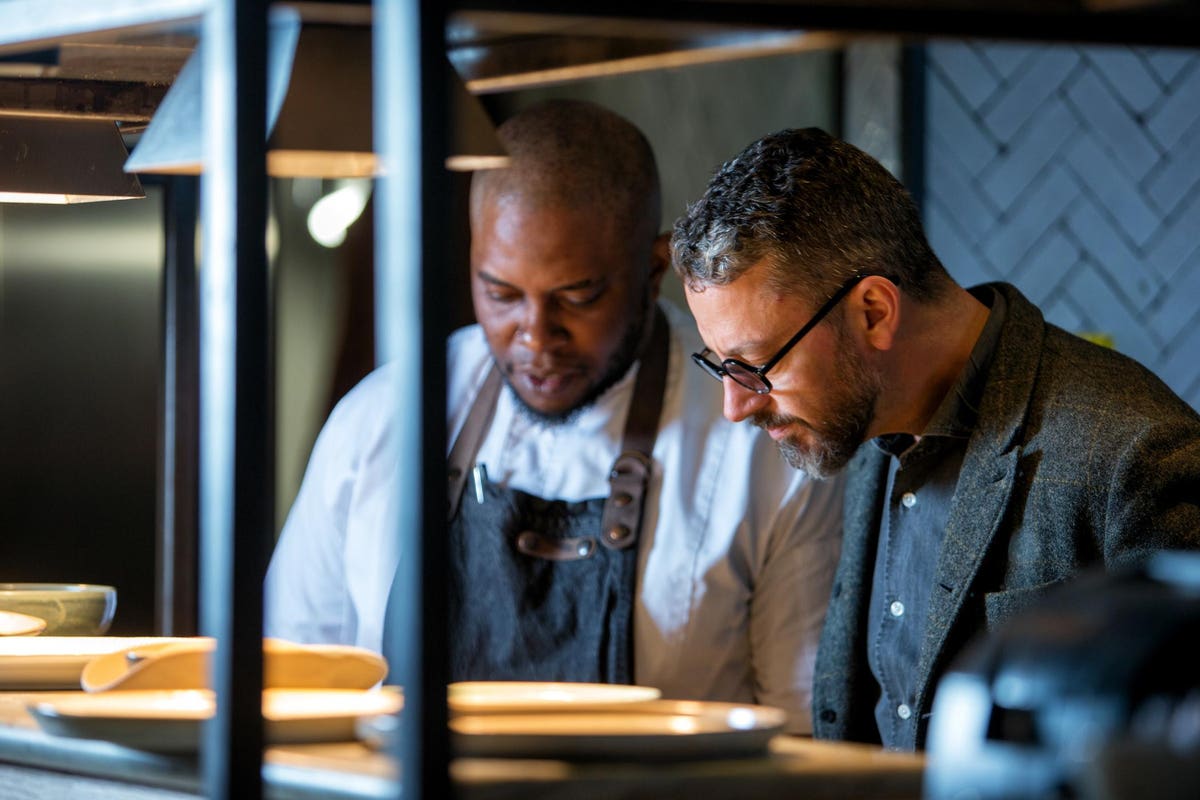 Gathering a loyal fanbase through the duo’s much-loved contemporary all-day menus (which are also part of the Home Cafe Business is Rail House Cafein Victoria, which opened in 2017), the new opening promises to bring a relaxed ‘neighborhood’ vibe to Bloomsbury.

“My passion is to open restaurants that can make a meaningful difference in an area,” says White. “Riding House Bloomsbury will follow in these footsteps, bringing a members club atmosphere to historic London, bringing residents together by providing a large, accessible and lively modern brasserie that operates all day for all occasions.”

The restaurant is located in Bloomsbury’s Brunswick Center, one of London’s most notable and documented pieces of Brutalist architecture. Interiors, by Lou Davies of Box 9 have an industrial feel, with exposed pipes and rubbed-wood tables, but softened with botanical and natural touches, including hanging plants, green velvet banquettes, and burlap lighting. Concrete cubicles contrast with restored and salvaged furniture and tables that have been created by innovative British craftsmen using repurposed stone, marble and metal.

Although originally from Nigeria, Omereye has spent a lot of time in Barbados, namely cooking in some of the best restaurants on the island including The cliff and The cliff beach (which he helped launch). A passion for Caribbean and West African flavors plays out on his menus, so diners can expect dishes such as Cocoyam Mash, a twist on the dish the chef’s mother used to cook for him. when he was a child; Cassava hummus and salted cod fritters with homemade Bajan pepper sauce.

The restaurant is eclectic and diverse – the essence, indeed, of today’s modern London.

Here, exclusively for Forbes, Henry Omereye explains how travel has influenced his cooking.

What is the philosophy of Riding House Bloomsbury?

We believe in creating a place that can serve as a hub for our customers, especially those in the area. We seek to create a space that suits all occasions – business lunches, coffees with friends, family dinners – a members club without membership. This is particularly important to us in Bloomsbury, as there really is no other place serving a similar purpose.

What are the signature dishes?

My personal favorite – which has also become a bit of a signature – are the salt cod fritters. After a shift, I like to sit down with a plate of donuts, topped with Bajan pepper sauce and a refreshing apple juice to drink. Other standout dishes have to be our Chicken Wings, Earl Gray Dried Trout and our Miso Sea Bass.

How would you describe your kitchen?

It is globally inspired and contemporary, with particular influences from West African, Caribbean and Asian cuisine. Our USP is that you can’t put our menu in a box – all of our dishes are inspired from around the world, with the team encouraged to use their own backgrounds and inspirations to contribute to the menu.

How do you stand out in London, a city rich in innovative restaurants?

Nowhere else offers the breadth of menu that we do – you wouldn’t want dishes like ours all available elsewhere. We’re also not afraid to try new things and cross cultures, which really helps set us apart.

What influences inspired your culinary journey?

Major culinary influences from my childhood in Nigeria include Scotch Bonnet, which was on everything (and can be seen on my menus today) and Maggi, a really versatile seasoning, which I use instead of broth or salt. , as it imparts more flavor and builds a great profile. Besides the direct culinary influences, my childhood there definitely inspired my culinary journey, as it taught me the definition of hard work and graft – and always being nice to people, which is important considering of the small size of the restaurant industry.

What are your favorite Nigerian dishes that you like to eat?

On a nice sunny day, I love pepper soup, which is made with discarded bits of meat like beef, tripe, goat liver and cow liver and is full of pepper. I like a nice cold Mighty Malt – a Guinness-style soft drink – to go with it. For dinner, I love Pounded Yam with Okra Soup – it’s super filling and keeps you satisfied for a long shift.

You have also spent time in Barbados, what were the highlights of your time there – culinary or otherwise?

I learned a lot from the locals – how they cooked and how they ate, but also how they lived. My mother-in-law taught me how to make salt cod patties – called “fish cakes” – but I loved seeing how traditional Bajan fish patties were made by the grannies at Oistins, a fish market in the Friday. I also watched how they cooked traditional dishes, like oxtail. Overall I loved the Caribbean lifestyle and how laid back it was. You also have the opportunity to spend a lot of time on the beach – before, after and even during work!

What were your favorite Bajan foods and places to eat when you lived there?

Nothing beats the ‘Fish Fry’ in Oistins on a Friday night, but on weekdays I always went to one of the cafes in the Emerald City Mall. They’re nothing fancy but you can still find amazing things to eat. We used to go several times a week and the queue snaked around the building, with people waiting for traditional dishes, such as rice with peas, oxtail, fishcakes. I would always take my pick at Brownes Beach and have it with a Banks beer. I also loved popping into Bubba’s Sports Bar, which served the best BBQ chicken wings.

What have been your favorite places to visit in Barbados and why?

Nothing beats Brownes Beach in Barbados – I would go with my family and watch my kids swim in the ocean. Or, on a weekday, I was heading to the beach between my shifts and after work, I was there having a drink with the locals. I also loved taking the ZR buses with their loud music and great atmosphere.

What inspiration did you draw from the Caribbean for the current menu at Riding House?

Obvious inspirations on our menu can be seen in the donuts and Bajan pepper sauce, but cooking in Barbados, in particular, has taught me not to be afraid to try anything. I also learned some traditional recipes there – many of which were originally inspired by Africa or other islands, such as Jamaica.

You have worked in different kitchens, which chef has inspired you the most?

The person who inspired me the most is Marco Pierre White. When I worked for him, he taught me a lot, from discipline in the kitchen to how to work in a team. He is a huge inspiration to me, not only for his skills, but also for the way he handled the people around him.

How would you describe your cooking style as a chef?

I would say it is nutritious. I encourage my team to have fun as long as the kitchen is running smoothly. To encourage longevity, you don’t always have to be serious. I want my team to have fun while they’re at work. Wherever I’ve moved, I’ve always had the good fortune to bring my team members with me and I think it’s because I really care about advancing my team. My senior sous chef at Bloomsbury, for example, was originally my apprentice many years ago and one of our best chefs was originally a night cleaner. You have to invest in someone and build a relationship, then that encourages their best work. If you love what you do, have fun, work hard, and invest in people, you’re fine.

As a chef, how important is it that what’s on offer at the bar also matches what comes out of the kitchen?

It’s super important. When we are working on a new menu, the bar team is always involved at all levels, from development to tasting. Our bar concept is supervised by Harry Hugheswho joined us from The Ned, and will see a bar dominated by large barrels of whiskey from Negroni, Martini, Old Fashioned and Rum Manhattan, aged in the barrels. New house cocktails include Tequila Piña Picante, house-infused with pineapple skins and chili, shaken with citrus and sweetened with agave. Our design at Riding House Bloomsbury mirrors our concept, with an open bar and kitchen blending together.

How important is the interior and overall design of a restaurant?

Another vital part. A good restaurant has to have a good atmosphere and that has to come from the design, as well as the food and drink, of course. Riding House Bloomsbury founder Adam White worked on the design with Box 9 and created a beautiful space, which allows every aspect of the experience to complement each other.

Austin restaurateurs lay claim to Lockhart: In the heart of barbecue town – Food