MadTree sets the opening date of its bar, restaurant and event space in alcove in the Outre-Rhin | Food News | Cincinnati

MadTree’s Alcove is scheduled to open on Monday, March 7.

MadTree Brewing is set to open a multi-level bar, restaurant and event space on the Rhine next week. 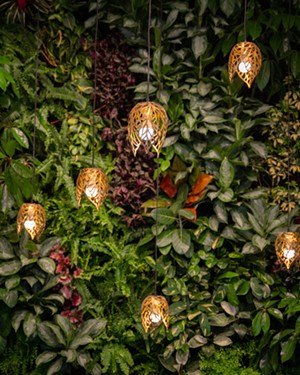 The alcove is full of living walls and greenery.

MadTree describes Alcove’s main bar and restaurant as containing “a large bar, bright lounges, dining areas and an intimate private dining room for small groups”. On the website, they also mention a greenhouse bar and “lush outdoor patio space for lounging and dining.”

Food and drink menus have yet to be announced, but the brewery said the menu will focus on farm-to-table dishes created by Chef Stephen Williams of Bouquet Restaurant and Spoon: Kitchen and Market. The drinks menu will include house-made cocktails — using herbs grown in that aforementioned greenhouse — and MadTree’s own beers will be on tap at the three bars located throughout.

Design-wise, Alcove is filled with living greenery from Urban flowers in every corner, creating a secret garden feel with living walls. In the event loft on the third floor, there is even a massive chandelier made of ferns.

The designers also focused on incorporating the building’s rich history into its design. Old photos and newspaper clippings are framed along the walls, telling the story of a building that has seen many lives since its construction in 1873.

Formerly known as Weilert’s Café, a popular beer garden across the Rhine, this historic building hosted many events in Cincinnati life in the 19th century. For example, members of the original Cincinnati Symphony Orchestra performed as the house band before the symphony was officially formed. The front dining room even housed a favorite booth of politician George “Boss” Cox. 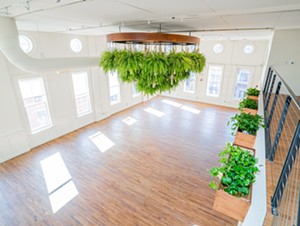 The “Loft” event space on the third floor can accommodate up to 150 people. It was formerly known as Yokum Athletic Club, where Ezzard Charles is believed to have trained. High ceilings, tall windows, and light wood floors make the space calm and earthy, especially against the living chandelier.