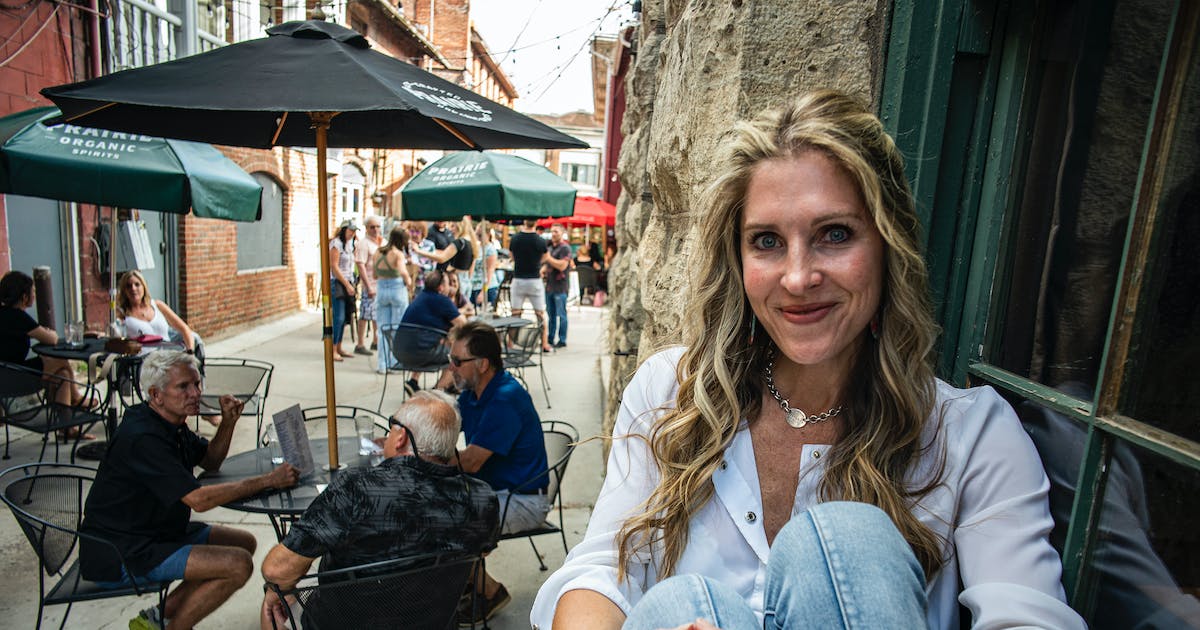 Dumpsters and trash cans lined the small back passage known as “garbage alley” between the brick buildings near Commercial Street in downtown Stillwater.

But since a cleanup by local business owners at the start of the pandemic, the space has been converted to outdoor dining tables and ax throwing pits. And it will remain so for the foreseeable future.

The revitalization of Stillwater’s Union Alley is a testament to the ingenuity of Twin Cities restaurants who were forced to modify their dining establishments to comply with COVID-19 restrictions. It also shows the willingness of some municipalities to try to reduce municipal licensing red tape and compromise with its small businesses.

“On days like this, all the action is outside,” said Sara Jespersen, who led much of Union Alley’s transformation, as she stood in the middle of the room at Eat lively early Thursday evening. “I hate to say COVID was an opportunity, but it turned into her.”

Jespersen opened his ax throwing bar the lumberjack in December 2019, just months before it and other businesses were forced to close as COVID-19 spread in the spring of 2020. When restaurants were allowed to reopen later in the summer, they were only able to have dinners out, per state rules.

But the problem was that the woodcutter didn’t have a patio.

So Jespersen glanced down the smelly alley outside his back door.

“Nobody would ever walk through it,” Jespersen said, of the alley she said was known as “the armpit of Stillwater.”

Jespersen had already considered the potential of the driveway. Just before the pandemic hit, Jespersen approached several businesses that were using the alley to store their trash. As part of a mutual agreement, the group consolidated its fifty bins in and around the alley into three dumpsters and a recycling container, which made better use of the space.

In June 2020, neighboring business owner Joe Ehlenz of Lolito Cantina assisted in the process of cleaning, deodorizing and power washing the driveway. Jespersen hung lights between the buildings. A $5,000 donation from a local family helped Jespersen build two ax throwing pits and set up tables that could be used by both restaurants.

“Having that aisle available…it created momentum that gave me so much hope that we could do it,” Jespersen said.

Ehlenz said Union Alley was a godsend at the height of the pandemic, and now it’s the icing on the cake as sales have picked up and Lolito is poised to generate pre-pandemic numbers.

“I think it’s a really cool space that’s way better than it was,” he said.

In 2020, after Governor Tim Walz made changes to allow outdoor dining in June, many local cities issued executive orders relaxing rules so portions of streets and parking lots could be used for patios. .

After the peacetime governor’s emergency ended last summer, some cities have started to tighten outdoor dining rules again. But some have taken a hybrid approach to allow for particular patios.

Last February, Stillwater City Council indicated it wanted to end the city’s temporary allocation for outdoor seating in public spaces, but city officials agreed in April to approve an encroachment agreement as a pilot project to allow the Union Alley patio to continue. The city council was supportive as the driveway is not a full public street and there would be no loss of parking as the driveway was an unused and degraded area.

“Most of us know how terrible this alley used to be,” Mayor Ted Kozlowski said at the city council meeting.

Union Alley adds new energy as visitors flock to the city for outdoor activities, such as riverboat rides and Lumberjack Days, which will return in July after a two-year hiatus, Robin Anthony said. executive director of the Greater Stillwater Chamber of Commerce.

“It’s pretty amazing how busy it is,” Anthony said.

Across the metro area, other patios that have sprung up during the pandemic are also allowed to stay.

When St. Paul’s declaration of emergency expired in April and ended the mayor’s temporary allocation for outdoor seating permits and licenses, Urban Growler co-owner Jill Pavlak frantically sent an email to city staff trying to save his brewery’s extended patio, which increases the capacity of his drinking room by a third. Within a week, Urban Growler got the approvals it needed.

“What we see is that people still want to be outside. … The virus is still with us and there are different levels of comfort,” Pavlak said. “When it’s hot, people are more outside than inside.”

Brian Ingram, co-owner of Hope Breakfast Bar on the outskirts of downtown St. Paul, hopes his restaurant will also get city approval to keep its patio space, though his situation is a bit more complicated.

During the pandemic, the short stretch of Leech Street that connects Grand Avenue and 7th Street between Hope Breakfast Bar and Cafe Astoria has been blocked off for cars to allow for outdoor dining space.

Ingram asked the city to give up the street and offered to pay to turn it into private property. If an agreement is reached, it will add a capacity of 75 more seats to the 100 already served inside the restaurant.

“When COVID arrived, [the patio] became a lifeline,” Ingram said. “If we hadn’t had that, Hope wouldn’t exist today.”

Going forward, Ingram said he wants to add trees and possibly a seasonal skating rink. “We hope to be able to set a precedent,” he said.

St. Paul officials say they are working with companies that want to expand their service areas on a case-by-case basis.

Minneapolis, which is still operating under an emergency bylaw, still allows loose zoning and business licensing regulations for outdoor spaces. City workers have discussed extending benefits past the emergency expiration, but Minneapolis’ ordinances code is expected to change.

“We are still early in the exploration process with internal departments and external agencies to see if there would be a viable path to pursue outward expansions in the future,” Minneapolis spokesman John Louis said. .

In Edina, the city has allowed restaurants in the 50th and the business district of France to generally keep their slightly enlarged terraces, although they still need permits.

“We saw no reason to go back and over complicate a process that works well,” said Bill Neuendorf, Edina’s director of economic development.

In Saint-Cloud, the city has continued to allow patios along 5th Avenue for now as it tries to revitalize its downtown area.

For Union Alley in Stillwater, Jespersen plans to fundraise to commission mobile art murals and chalk art as part of an “Art Alley” concept.

“It will continue to evolve, instead of being an armpit, in a dynamic space,” she said.