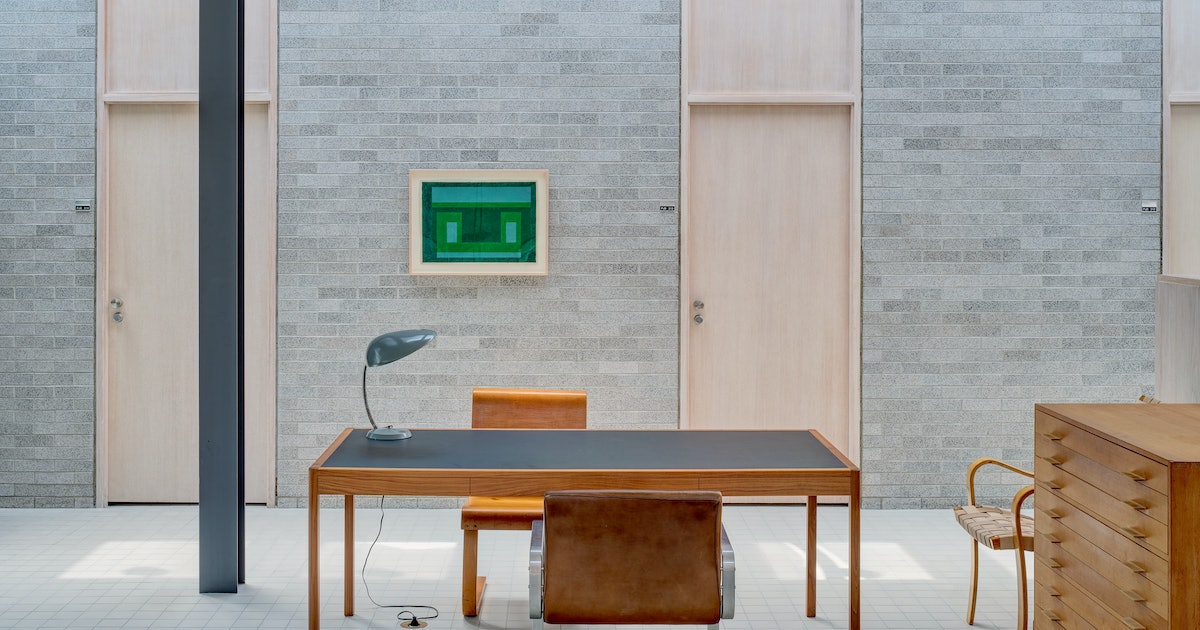 Organized by New York-based design gallery R & Company and BassamFellows, the by-appointment-only exhibition is curated by James Zemaitis, director of museum relations at R & Company, and art advisor Erica Barrish. It includes an impressive range of post-war modernist design from the R & Company collection, by furniture masters such as Marcel Breuer, Poul Kjaerholm, Charles Eames, Eero Saarinen and Sérgio Rodrigues; lighting by legends like Angelo Lelii and Greta Magnusson Grossman; the elegantly designed and Scandinavian-influenced contemporary furniture designed by the founders of BassamFellows, architect Craig Bassam and creative director Scott Fellows; and works by Bauhaus masters such as Josef Albers and László Moholy-Nagy, as well as contemporary pieces by John McCracken and Prabhavathi Meppayil, to name only a fraction of the pieces on display.

And if that wasn’t enough, the offices of BassamFellows are housed in a one-story brick building, designed by Philip Johnson in 1952 as the administrative offices of the Schlumberger Research Institute; the designers moved into the building in 2018 after carrying out a complete restoration of the original structure, with its ingeniously daylit spaces for meetings and gatherings, private offices with views of the landscape and a glazed landscaped courtyard . (R & Company is organizing another exhibition, Prune, bend, cane, which focuses on BassamFellows furniture materials and crafts, in New York at its Franklin Street location through August 27; reservations are encouraged.)

Bassam and Fellows, who own a Johnson-designed house across from the architect’s famous Glass House, had always considered hosting gatherings and exhibits in the space, and a conversation with R & Company led to Modern in your life. Fellows note that Johnson designed the modest-sized building to connect with nature. “Everything is done for the well-being,” he says, which “makes building relevant today”. Bassam adds: “Our building was designed to accommodate life”, not just work.

For Zemaitis, the exhibition and its location provided an opportunity to refer to the Good Design exhibitions that were held at the Museum of Modern Art in the 1950s, when Johnson was head of the architecture and design department at MoMA, and after Eliot Noyes had a department of industrial design and “bring in Connecticut Modernism,” which refers to the fact that Johnson, Noyes and Breuer were part of the Harvard Five, a group of architects who designed modernist homes in and around New Canaan. At the entrance to the office is a table designed for the space by Florence Knoll, who designed the building’s original interiors. And Zemaitis worked with textile dealer Cora Ginsburg to obtain rare fabrics, displayed in private offices, by designers like Jens Risom, Olga Lee and Joel Robinson, the first black designer to win a Good Design Award from MoMA and to be included in its collection of architecture and design.

For Barrish, some artists “needed to be” in the exhibition, such as Moholy-Nagy, who was friends with Breuer and Albers at the Bauhaus, and whose Untitled (1925), a fascinating abstract work done in pen and ink, spray watercolor and brush, graphite and collage on paper, was offered to Breuer in 1928. “It has all the characteristics of modernism, ”says Barrish. Albers City, from 1928/1936, tempera on Masonite, in a wooden frame believed to have been made by the artist, served as the basis for a large mural in the 1963 PanAm Building (now the MetLife building) in New York City . Another Albers, with sumptuous colors Variant / Adobe, from 1947, was inspired by a trip to the American Southwest. And a remarkable sculpture by Jean Arp, Hurlou on Pedestal-Column, a combination of bronze, granite and wood elements balances delicately in the central conference room.

Near the end of the building, Siskiyou (1988), a large glossy geometric solid by minimalist artist John McCracken, mirrors Breuer’s (1936-39) short chair, one of his first influential molded plywood pieces, and one of Triennale’s floor lamps. Angelo Lelii, designed in the 1950s for the Italian company Arredoluce; nearby is one of Rodrigues’ padded Sheriff lounge chairs and the asymmetrical sofa by BassamFellows. A three-legged floor lamp, designed by Johnson and lighting designer Richard Kelly, stands near its four-legged successor, which was more stable than the original version. Along the east aisle of the building, a line of side chairs, ranging from the winning entrance by Eames and Saarinen at MoMA’s organic design competition in 1940 to others by designers like Risom, Kjaerholm and Hans Wegner , as well as several BassamFellows designs that illustrate their fascination with what they called “archetypes” by the masters who came before them. But this is only a small sample of the riches of the exhibition.

For reservations, which you must have, click on this link and choose “Ridgefield CT”.