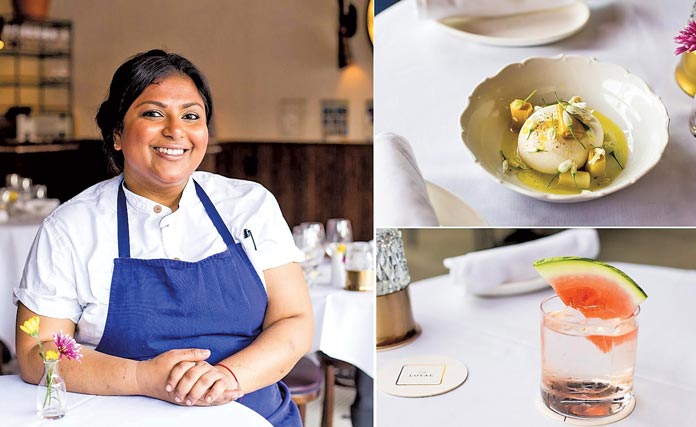 Long-time West Village resident and chef Nicole gajadhar, gives her daily walk to work the time she needs to plan and think.

For 17 years, Gajadhar roamed the streets of the city center and developed excellent menus and unified kitchen teams; She first went to NoHo where she made a name for herself as head chef at Saxon et Parole.

After leaving the place she helped become a downtown favorite, her culinary expertise needed a new home. She joined Michelin-starred restaurateur and chef John Fraser, a culinary pioneer best known for redefining the role of vegetables in American cuisine, from imaginative gourmet restaurants to nostalgic neighborhood breweries, as chef at Nix, Fraser’s vegetarian / Michelin starred / vegan restaurant in the West Village.

In May, Fraser’s beloved West Village bistro, The Loyal, reopened with Gajadhar as head chef. Since its opening in 2017, the restaurant has become a neighborhood institution. The Loyal serves seasonal American fare and cocktails for indoor dining, as well as 30 outdoor sidewalk seating on Bleecker Street.

Fraser has made it a point to stay open during tough times to keep employees at work and to be a beacon for the neighborhood. Nicole Gajadhar’s place as a lighthouse keeper is cemented every day as she takes into account the changes, ebbs and flows of the neighborhood and interprets them on her menu.

How did you get interested in becoming a Chef?

I grew up on my grandparents’ farm in Trinidad, always playing in the kitchen and learning to cook as well as to plant, grow and harvest our crops seasonally and have been influenced by the cooking styles of the locals. East Indies and the Caribbean by creating meals from the environment. It had a profound impact on what I wanted to do with my life.

My family moved to America when I was nine, but I was unsure of my career goals. I spent two years in college at the Borough of Manhattan Community College, graduated without knowing what I wanted to do. I always knew I wanted to do something creative. One night my aunt had attended an event at BAM where she spoke with the chef. Talking to her about her experience at the event, chatting with this female chef about the food served that night, it reminded me how much I loved cooking as a kid and how much I enjoyed cooking that night. thought I wanted to be a chef. . The conversation inspired me to explore a career that was once important to me, so I embarked on a course that led me to study at New York City College of Technology. I chose NYCTT because not only were they well suited financially, but they also offered a full degree with their program. This allowed me to start working towards a bachelor’s degree in hotel management.

I was inspired to follow my dreams in the culinary arts and embarked on a course that took me to spend a semester in Florence, Italy, and the realm of chef life. I was external to Tabla, I worked at 10 Downing, Tertulia and Lion before joining the AvroKo hotel group at Saxon + Parole.

Tell us about the concepts you were involved in while working at AvroKo Hospitality Group.

I was part of the opening team with executive chef Brad Farmerie for The Poni Room.

Prior to that date, when they partnered with JetBlue, I was part of the team responsible for creating the menu for their Mint program, JetBlue’s new approach to business class flights. We designed dishes that had to be delicious, taking into account that the perception of taste is altered when flying and the logistics of food preparation for an operation of this magnitude. I was part of the Saxon + Parole team. When I helped open Saxon + Parole Moscow, it was all about working with locally available ingredients to create the same Saxon + Parole experience.

What is the makeup of The Loyal’s kitchen and staff?

My cooking philosophy is that we are a family oriented team. My staff cooked with me when I was a cook; they still work with me for over 10 years and joined me in the new restaurant. Everyone is super equal, I have three cooks, a prep cook and a part-time pastry chef and together we serve 70 to over 100 place settings a night. I bring diversity and inclusion to my kitchen and it resonates throughout the restaurant.

What is on the menu?

We have a manageable, seasonal and very tasty menu. The guests appreciate the dishes. The best-selling dishes are homemade pasta and vegetarian-vegetable dishes. Notables include the ½-pound Piedmontese burger, sweet potato curry, Duck Tots, and the Sundae Set dessert.

How do you see the industry today?

We need to take a very holistic view of sustainability that spans the entire farm. It’s about supporting the planet and supporting our team. It is about “thinking and acting in a hospitable way” in all areas. The industry is changing; being renewed and reopened, with a broader perspective of how we run things. The main focus now is to find staff, focus on treating staff and move in a different direction with new attitudes towards sustainability, a healthy work culture and the food suppliers we hire to move from the front.

The industry as a whole needs to help people earn decent wages to live fairly. I applaud my boss John Fraser for reopening the Loyal during the pandemic so our staff can work. This showed his appreciation for his employees and his support for the community.

You are a member of the New York Women’s Culinary Alliance, why did you join and what do you see as the role of the organization for the industry?

I have been a member since 2019. Working in the kitchen takes a lot of time. I literally don’t have time to network or build relationships. I wanted to join a group that I know would understand, uplift and encourage the growth of their peers as well. I was part of the task force in 2020 with Alliance founder Sara Moulton to pave the way for a healthier culture within the Alliance.

I felt it was important for the Alliance to be renamed and evolve and start to think about the community, about the things that are happening in the industry as well. Our goal was to refocus, update the issues that matter, change the code of ethics, diversify members to be more diverse, and hold individuals accountable for their behavior to each other. I am proud of our accomplishments, especially the new mission statement which can be found on the NYWCA website, and to make the Alliance relevant today for all members. Our members come from all sectors of the industry. I enjoy networking, making new friendships, staying relevant in our industry, and supporting talented women.

Portions of this interview appear in the NYWCA newsletter. Photo credit: Karlie Louise

Bourbon & Bones will bring the 3rd location to Peoria