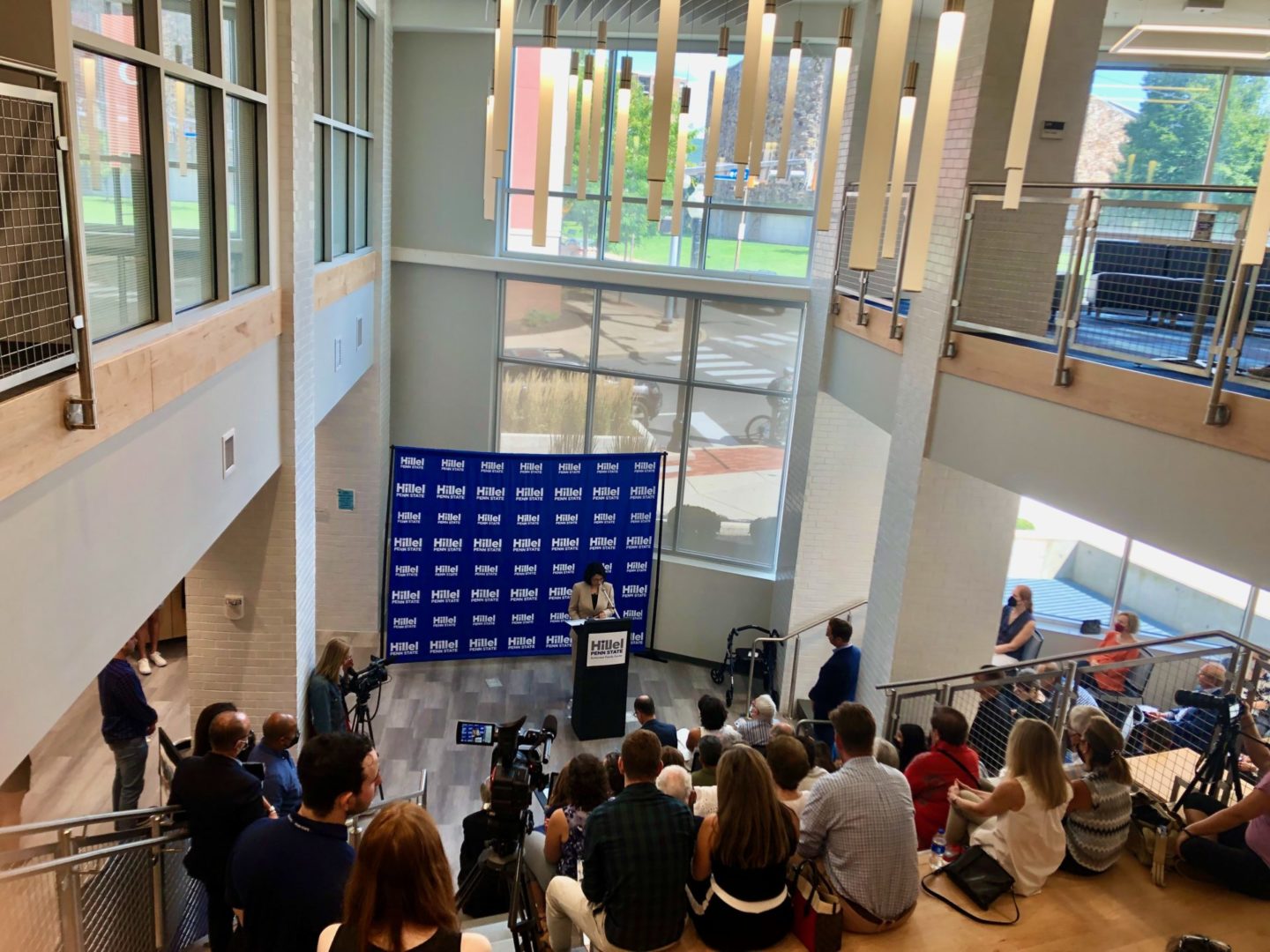 More than a decade under construction, a new Penn State Hillel Center has opened in downtown State College to usher in a new era of Jewish student life at the university.

Community members, students, staff, donors and dignitaries celebrated the opening of the Gutterman Family Center for Jewish Life on Friday afternoon. Located at 180 S. Garner St. and co-developed with the Maxxen skyscraper, the center will provide a new spiritual and cultural home to serve the thousands of Jewish students at the University Park campus.

“This is a transformative era where PSU’s approximately 5,000 Jewish students can easily find social, cultural, religious and educational activities and resources,” said Emily Rosen, Penn State’s senior engagement officer on the Hillel campus and chair of its mentorship program. “Located in the heart of downtown, it couldn’t be more convenient.

“One of the fundamental principles of Judaism is to welcome the stranger. When you walk through the doors of the Gutterman Family Center, you are no longer a stranger. You have a place where you belong.

Named for major benefactors Nancy and Bernard Gutterman, who contributed $3 million to the project, the 15,000-square-foot center is about 10 times larger than Hillel’s space at the multi-faith Pasquerilla Spiritual Center on the campus, which the organization will continue with limited use.

The center is located on the first two floors on the Beaver Avenue side of the Maxxen.

At its center, on the first floor, is an open and bright hall with a monumental staircase and acoustically designed to highlight prayer and musical performances. A nearby study lounge is outfitted with a flat-screen TV, seating, and semi-private “meeting pods.”

On the second floor are a wellness room, other pods, a conference room, an outdoor terrace, the offices of the rabbi and staff, and the chapel, which houses the Torah of Hillel.

“Most importantly, the Gutterman Family Center is a warm and welcoming place for the thousands of Jewish students at Penn State, a place that inspires pride in their Jewish identity and where they can feel both seen and safe.” , said Penn State Hillel executive director Aaron. said Kaufman.

When Kaufman arrived at Penn State 15 years ago, the organization was growing and already actively looking for a place where it could build a new center. In 2011, Penn State Hillel acquired property along East Beaver Avenue that once housed a Citizens Bank branch adjacent to what was then the Garner Street parking lot.

Hillel then partnered with the Friedman family, owners of the parking lot and property developer CA Ventures, to incorporate the center into what would become the 12-story mixed-use building, The Maxxen.

Developers broke ground on the new building in 2018 and it was largely completed in 2020, but work on the Gutterman Family Center continued into 2022.

“It’s not quite 40 years of wandering the desert, but it took a while to get here,” Kaufman joked.

“Wherever I have been I have had the great good fortune to see what Hillel does for our students, and it is no surprise that here too Hillel has been a model ecumenical partner,” Bendapudi said. “What I like here is the focus on students, of course, and the commitment to creating a vibrant religious and cultural community for those who want to come and participate.

“This special place for community, for congregation and for celebration begins a new era for Jewish life at Penn State.”

Bendapudi added that Hillel welcomes people of all faiths and offers programs and events that are open to everyone.

State College Mayor Ezra Nanes, the borough’s first Jewish mayor, agreed, saying the center and its mission to help students “grow intellectually, spiritually and socially” can play an important role in the community of the city and the dress.

“I think the Gutterman Family Center will be a nexus where campus and community can come together, celebrate Jewish life and all of our lives because all of us, from all walks of life, and that’s fundamental to who we are in this community,” Nanes said. .

Almost all of the speakers at Friday’s event emphasized the importance of what the impressive new building represents.

The sounds of students cooking in the kitchen or chatting on the stairs, Rabbi Rob Gleisser leading prayer and education, and the smells of Shabbat dinner are reminders of Hillel’s mission, said board chair Jill Epstein. from Penn State Hillel.

“Hillel is where Jewish students, young adults, learn and decide to be Jewish on their own terms, how to be good citizens of the world and begin their journey to Jewish leadership,” Epstein said. “Jewish leadership begins here but does not end there. Through the Gutterman Family Center, we will be able to continue our mission to enrich the lives of Jewish students at Penn State so they can enrich Jews around the world.

The new center also marked a celebratory occasion for Hillel International which engages 140,000 students on 850 campuses around the world.

Hillel International President and CEO Adam Lehman, who was joined at the event by Chairman Skip Vichness, said Penn State’s Hillel organization is “an incubator for future Jewish leaders.” and leading innovation to be relevant to modern students.

“Let this incredible facility be the container in which tens of thousands of Nittany Lions have their souls imprinted, their lives impacted and their futures shaped in a way where they will not only bring so much pride, joy and vitality to the Jewish future, but will bring so much to Penn State specifically for this mission,” Lehman said.

Get all the latest news and events straight to your inbox.