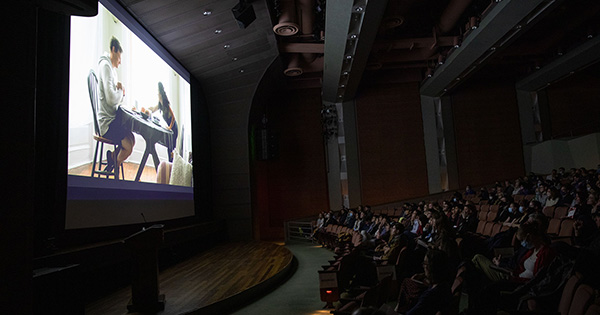 The red carpet event, held at the Tsai Performance Center on April 15, drew a large, at times noisy, crowd. “It’s a lot of fun doing these awards shows live, especially if Will Smith isn’t on the guest list,” joked Bill Braudis, assistant professor of film and television at COM.

A raucous crowd was on hand Friday, April 15 at the Tsai Performance Center to cheer on the winners of the 42nd annual Redstone Film Festival. The event marked the first time the festival had been held in person since 2019, and the filmmakers’ friends and families were there to celebrate their perseverance and creativity.

Amy Geller (COM’16), an instructor at the College of Film and Television Communication, summed up what this year’s cohort of student filmmakers achieved in one word: “pivot.”

“These amazing students did just that, [and] it proves that BU’s best and brightest cannot be stopped, even by a global pandemic,” she said.

The screening and awards ceremony, complete with a red carpet, drew large crowds, despite the Easter and Passover holidays and the long weekend. “It’s a lot of fun doing these awards shows live, especially if Will Smith isn’t on the guest list,” joked Bill Braudis, assistant professor of film and television at COM.

“It’s great to be back,” said Paul Schneider, COM professor and head of the film and television department, as he kicked off the event. “It’s a chance for us to celebrate. From our perspective, the stars of our department are our students, so we really want to showcase their work, and it’s a chance to come together as a community and to do.

The 2022 festival featured original films from COM film and television students. First, second, and third place awards were given to the films, along with several other awards, ranging from Best Screenplay to Best Sound Design. The awards are sponsored by Canon and the Sumner M. Redstone Charitable Foundation, established by the late Boston native and billionaire media magnate Sumner M. Redstone (Hon. ’94). The prizes included Canon cameras, a MacBook Air and cash.

This year’s finalists were chosen by a committee of production, screenwriting and film studies graduates, with a panel of seven film industry professionals judging the finalists.

Roses and Red Noses was the big winner of the evening. In addition to taking first place at the festival, the film – about a clown who tries to seduce another clown on the Boston Common – also won best cinematography and sound design and tied for best editing. One can only imagine what passers-by were thinking when the film was made, as the clown couple looked a bit, well, creepy.

“This project was not born out of freedom, but rather out of restrictions and regulations,” said director Zac Vujnov (COM’21) as he accepted the award via Zoom from Los Angeles. “I couldn’t have faces or mouths or smiles (actors had to stay masked due to COVID), I couldn’t have big crews. So many things we couldn’t do. Instead of stopping and going down, we used that motivation, used those restrictions to get creative.

Second place was a tie between maniacal and Dual socket. maniacalThe story revolves around a woman who initially appears to be trapped on a first date, but viewers gradually realize that there are ulterior motives to the encounter. “It was a very special project for us. [The antagonist] was supposed to be a richer character, but we had to shoot him in my apartment, so he had to be more middle class,” said director Tim Choi (COM’22) with a laugh. “I’m really proud.”

Dual socket, about two friends who go on an Uber ride that spirals out of control, not only shared second place honors, but took home Best Editing and won the People’s Choice award. “Hearing you laugh, hearing you sigh, nothing like that,” Geller said before asking people to vote for their favorite movie using a QR code on their phone. “You can learn so much from the audience watching your films live.” This opportunity was denied to the winners of the past two years, as the pandemic forced the 2020 and 2021 festivals to take place virtually.

This year’s other finalists: Blunt trauma, about a professional crime scene cleanup team, won third place honors and best screenplay; The Haunting at Marblehead, about a sibling duo who trick people into paying them to investigate ghost hauntings, then encounter a real ghost; and The Beautiful Vitawhich follows a couple as they struggle to balance their relationship and career.

Awards were also presented for Best Actor (a new category this year) and student-written screenplays, as well as graduate student thesis projects in film and television. On April 22, the festival moves to Los Angeles, where the films will be judged by a different panel of experts.

Jen Cuciti (COM’21), Roses and Red Noses cinematographer, echoed the sentiment of many of the winners in her acceptance speech, noting that these films would not have been possible without their teammates. “We’ve had such a crazy year. The crew we had was super special and everyone was super passionate,” she said. “I’ve never worked on anything like this; we worked on clown moves in our living room, did choreography with Yo-El Cassell [a College of Fine Arts assistant professor of movement]. It was a great experience overall and an honor to be part of this project. »

The Film and Television Studies Award for Innovative Scholarship