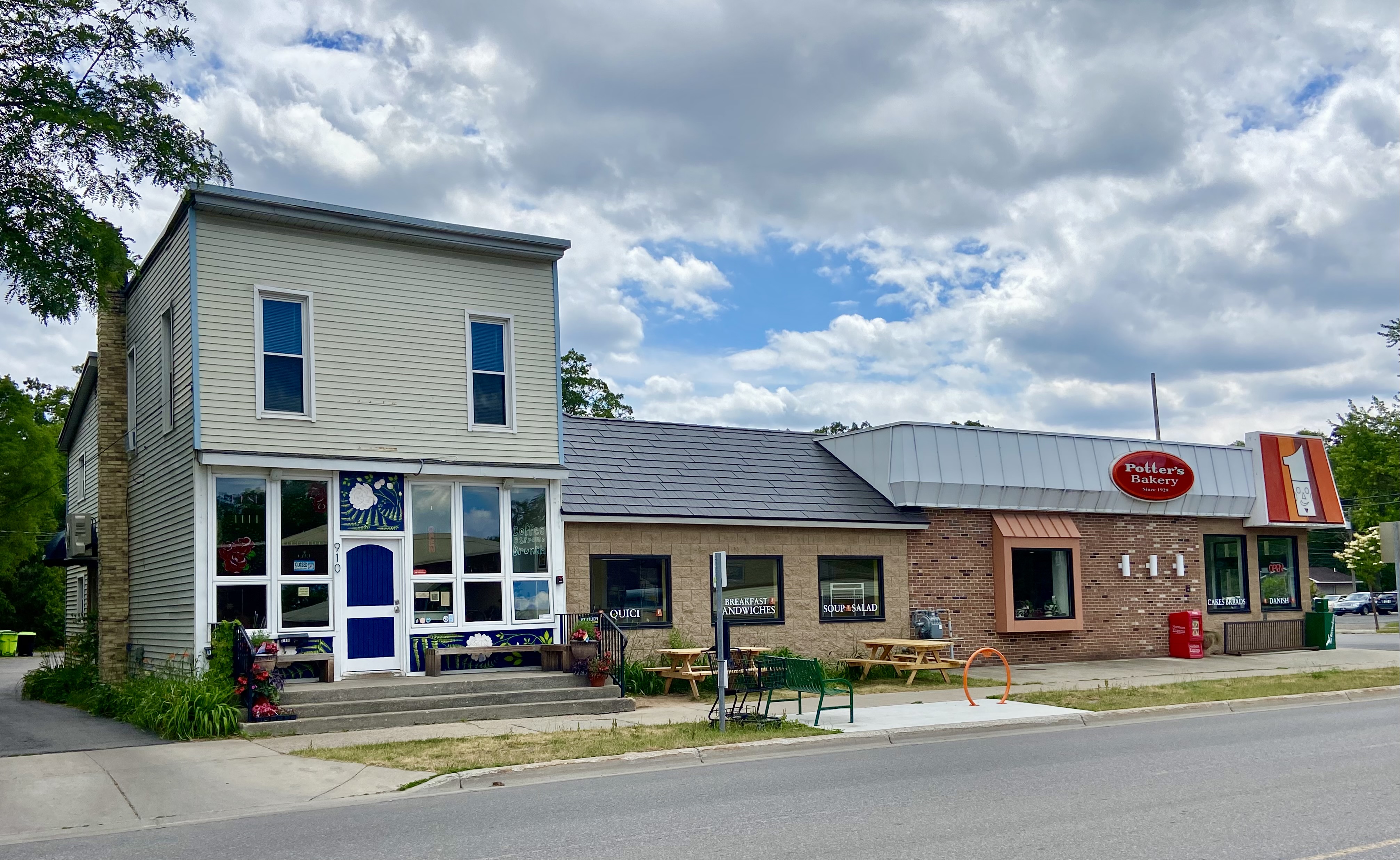 Rose and Fern will lose the location of Eighth Street; More information on restaurants, retail

Popular neighborhood cafÃ© Rose and Fern is on the hunt for a new home after owner Becky Tranchell announced this week that her lease will not be renewed after the end of the year. The teleprinter talked to both Tranchell and the owners of the building about the end of their business relationship and what happened next. Plus, read more updates on other business openings, closings, and moves happening in the area.

Rose and fern
After three years of co-locating in the Potter’s Bakery building at 910 East Eighth Street, the Rose and Fern breakfast and lunch cafe will need to find a new home starting in January.

Cafe owner Becky Tranchell announced this week on her website that her lease expires at the end of 2021 and the owners of the building – Mike and Kathy Potter, who run Potter’s Bakery with their daughter Becky Stoeckel – have refused to extend his contract. â€œDespite the offer of a higher rent, structural improvements and even an outright purchase of the building, the owners made it clear that they did not share the values â€‹â€‹of our community-driven cafe,â€ Tranchell wrote. in the message. â€œI am sad, frustrated, exhausted and angry. This place is special and it’s a safe space for a lot of people I care aboutâ€¦ it’s carried away and I can’t stop it.

Tranchell recognizes The teleprinter that what started out as a positive relationship – the Potters hiring Tranchell as an employee in 2018 and giving her the chance to test her menu before expanding into her own rented space next door in 2019 – has deteriorated to as Rose and Fern gained popularity. Logistical issues such as parking, customer overlap, and ventilation relate to strained relationships; the Potters sent Tranchell an eviction notice at the end of 2019, but his lawyer successfully defended his lease, which allows him to stay until the end of 2021. The utility rate hikes and Rule changes like restrictions on exterior signage and the display of flags have further worsened the relationship, according to Tranchell.

The owners of Potter’s Bakery say they plan to use the Rose and Fern cafe side of the building for their own expanded operations in the future. â€œAs the fourth generation prepares to take over the family business, we have high hopes and dreams for the space Rose and Fern currently occupy,â€ the family wrote in a statement. The Ticker. â€œAs longtime residents of Traverse City, we know community is everything – we wouldn’t have our business without it. We hope Becky Tranchell thrives in her next endeavor. She really has a knack for creating wonderful food.

Tranchell says his goal now is to find a new home for Rose and Fern and Stockist Coffee Company, a Traverse City-based coffee roaster that shares his space. Rose and Fern will continue to offer take-out sales only for the rest of the year as Tranchell seeks a building that can accommodate a small dining room, range hood, and take-out area. â€œWe can lose six months, 12 months in our business (when the lease is up), but at the end of the day it’s out of my control,â€ she says. “I’m just trying to let the community know that we need help and see where we go from there.”

Other openings, closings and moves across the region …
A new local cruise line is holding its grand opening on July 1, kicking off a season of daily two-hour guided tours on West Grand Traverse Bay. Discovery cruises, which will operate from Discovery Pier on West Bayshore Drive, is now booking tours on the refurbished 65-foot twin-deck Discovery vessel. Both decks are closed with panoramic windows, and the main deck is air-conditioned, allowing tours to continue in cool or rainy weather. The ship also has outdoor observation decks and a full service bar.

A new High Intensity Interval Training (HIIT) gym is launched in Traverse City. Partners Bekah and Allen Taylor and Becca Paquin and Ryan Schroeder took over Boomer’s old Bootcamp space at 2751 US-31 South and renovated and renamed the facility, targeting an August opening as a new one. EVO Athletics. The company will offer a “science, technology, coach-inspired 45-minute group workout” that can be tailored to suit different fitness levels. In addition to the HIIT sessions, EVO Athletics plans to offer other styles of yoga workouts and classes, training workshops for youth sports teams, and classes for organized community groups.

A variety of new treats are coming to the area to keep customers cool in hot weather. Oakwood Proper Burgers on Eighth Street will hold a grand opening on Saturday for its new vintage 1960s motorhome “Pay bar “, which will serve as crushed ice made with Northwoods syrup in flavors such as blackberry-lavender, grapefruit-basil and sangria (alcohol-free). The Cash Bar will also offer self-serve Northwoods root beer. Other options will roam the streets this summer: Traverse City Commissioner Ashlea Walter and her family are launching Sno Super, a pop-up mobile trailer inspired by the â€œshaving ice or snowball stalls of Hawaii and New Orleansâ€ that will appear in various locations throughout the summer, says Walter. the Cooler brand The ice cream trailer is also hitting the road, appearing at places like the July 4 Celebration in Northport, Shady Lane Cellars on July 24, and the Cedar Polka Festival August 26-29.

More drink deals are coming to the eastern part of town. Nomadic farm market hosted a grand opening on June 11 for its new tasting room in Williamsburg at 6620 M-72 East (the former Hoxie’s Farmer’s Market), offering cider flights and drinks Thursday through Sunday from 11 a.m. to 7 p.m. At Elk Rapids, Ethanology is planning a smooth opening today (Friday) – and a grand opening on July 9 – for its newly renovated exterior. Cocktail court. Food truck City block food will be on site all summer serving gourmet grilled cheeses, with live music scheduled rain or shine every Friday and Saturday on a new outdoor stage from 8 p.m. to 11 p.m.

Two local restaurants reopen their doors. Grill at sunset The restaurant at Mistwood Golf Course, which was closed for the season last year due to COVID-19, reopened Sunday through Thursday from 4 p.m. to 10 p.m., with plans to expand to seven days a week once enough kitchen help is on board. The dining room and patio overlook the golf course with a menu of traditional comfort foods like pork loin and ribs. The Great Lakes Culinary Institute Cafe Lobdell will reopen Tuesday on the second level of NMC’s Great Lakes campus, serving coffee, tea, espresso drinks, pastries and breakfast items Tuesday through Thursday from 7 a.m. to 11 a.m. until August 5.

Brooklyn Pepperoni Rolls, which started a delivery business in Traverse City this spring, now has a brick and mortar location. Mother-daughter duo Megan Hall and Brooklyn Hall can be found in an incubator kitchen at Oleson’s Plaza East on Hammond Road and offer order pickups for their homemade pepperoni rolls on Mondays and Tuesdays, with plans in July to start. to offer a selection of products. freshly baked ups. The company plans to soon offer a business line for phone orders, but is currently taking orders through Facebook or email.

Local car wash business Wash-N-Go-Car Wash opened its third location in Traverse City at 910 US-31 South at Chums Corner (the former Dairyville property). The company, which also has locations on US-31 across from Olive Garden and on Garfield Avenue just south of the South Airport, plans to open the new site by the end of the year. , according to co-owner Kim Visser. The company also recently launched unlimited subscription plans on its Garfield site.

Finally, national outdoor retailer Athlete’s warehouse opens in the former Gander Mountain space at Buffalo Ridge Center. Although company representatives could not be reached for comment, a giant “Coming Soon” banner announcing the upcoming opening of the company was erected outside the building, and Sportsman’s Warehouse issued a job posting June 18 to search for a Store Manager for the Traverse City location.