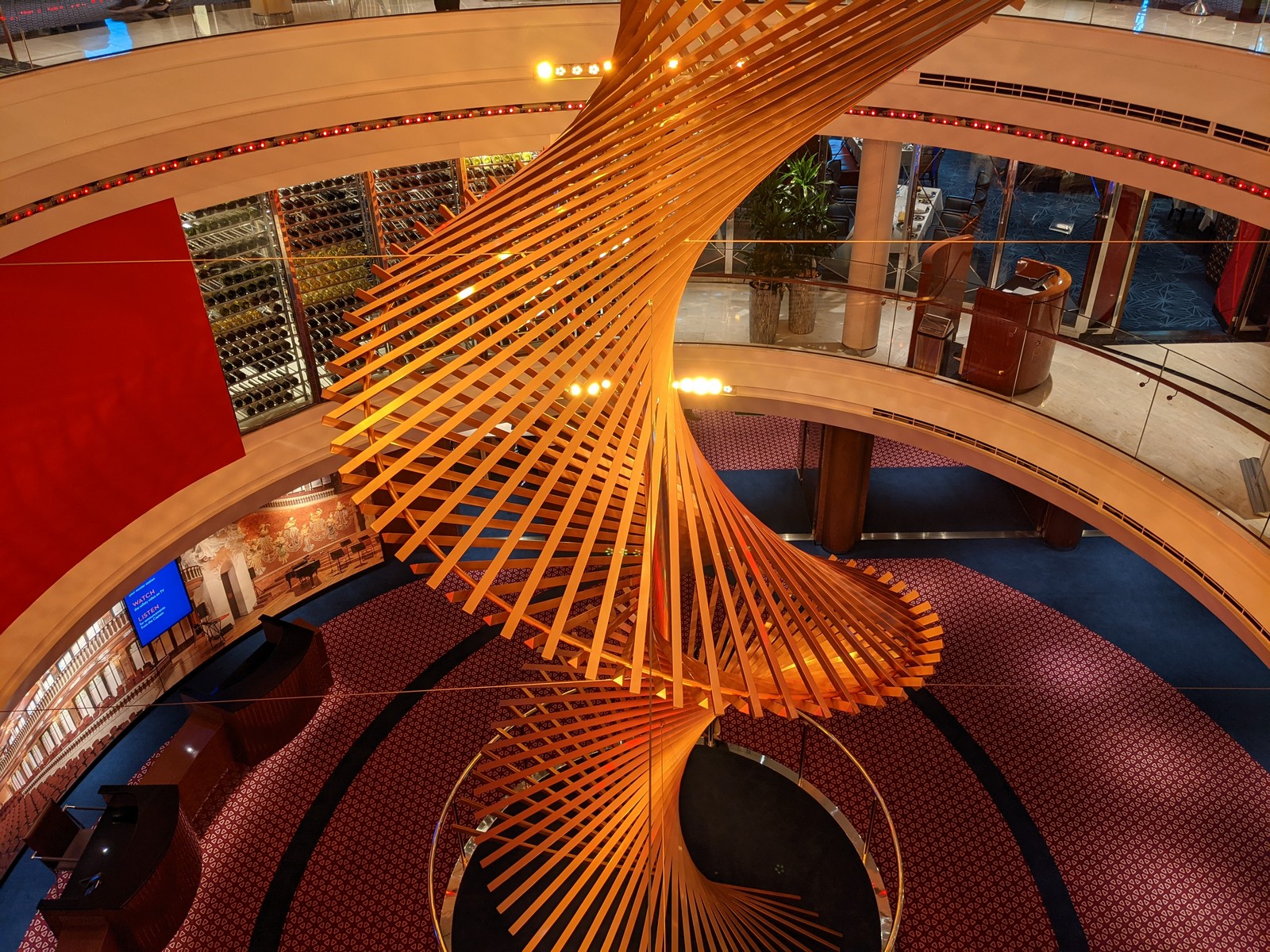 Wake-up calls, broken rideshare apps, and flight delays aren’t my favorite way to start my travels, but sometimes you have to work to win your cruise. Today was one of those days.

At 6:15 am, my Uber app declined to book a trip. At 6:30 a.m. Lyft kept swapping one driver for another, pushing my pickup time back. The security line at Dulles Airport was long, slow, and without social distancing, and I regretted letting my TSA pre-check expire during the pandemic. And did I mention the Fort Lauderdale weather system which caused my plane to spend an extra half hour on the runway while waiting for the green light to take off? Yes, it was that kind of morning.

On the plus side, no one was sitting in the middle seat next to me, and my luggage was already on the conveyor belt when I got to baggage claim in Fort Lauderdale.

But everything was fine because I had arrived in Florida with plenty of time to embark on Rotterdam, Holland America’s newest cruise ship, and my home for the next five nights.

I’m sailing the maiden voyage of Holland America’s new Rotterdam from Florida, so I wasn’t expecting an empty ship. Unlike my previous cruise, I was not asked to schedule a specific arrival time and I never even asked what time boarding had started. When I arrived the unloading area was very busy, but not crowded.

Inside the terminal I saw other customers but never had to queue. Stop one was the Covid document check, stop two was security, and stop three was boarding pass scanning and security photos taken. Other than juggling all my papers that I needed more hands on, the check-in process was quick and painless, without even a temperature scan. My key card would be waiting for me on board.

The welcome aboard Rotterdam was the one I hoped for and never received on my previous cruise on Carnival Pride. I boarded the ship in a double line of crew members waving flags and cheering as I walked their ranks to the elevators. The warm welcome made up for the rough morning.

Better yet, I could head straight to my cabin to drop off my luggage. Despite the gray sky and the rain, the day was coming.

My flight attendant Ukiss (I’ll remember that name!) Greeted me in the hallway and let me into my cabin. The cabin is modern with a neutral color palette accented by geometric prints. The loveseat is comfy with plush pillows, and I love the abundance of soft-closing drawers and shelves in the master cabin. Bathrobes, beach towels, throws, and a large umbrella are stored in the cabin for your use during the cruise.

Rotterdam is ready for today’s travelers. The office area has three American sockets, two European sockets and a USB port. An additional USB port and US plug are located on either side of the bed. I won’t have to plug my phone across the room at night, and roommates won’t have to fight over when everyone can charge their laptop or tablet.

The bathroom has a walk-in shower with glass doors and a shaving footrest, and is very spacious. On the other hand, the storage space is minimal; I barely have enough shelf space for all of my toiletries, and I don’t share the cabin with anyone. Soap and lotion by the sink and shampoo, conditioner, and shower gel in the shower are provided in dispensers – no soaps or travel bottles to take here.

The balcony has two slightly reclining straight chairs and ottomans, so you can lean back and pretend you have a lounge chair and a square table that can hold a room service tray. Can’t wait to try it out when the sun comes back.

I was ready to explore the ship – but safety comes first! Holland America has a new three-part rally exercise, which places the “brief” within the “safety brief”. First, go to your indoor assembly station to scan your key card. Second, watch a safety video in your cabin; you can multitask and do it while unpacking. Third, listen to the captain talk about the safety of the public address system before departure. I was in my room when he started talking, but you could relax by the pool or at the bar.

With this new exercise, you can work the rally around your schedule, and you skip all the standing and wait for the slowpokes in your rally station to finally show up. You can also pay as little or as much attention to the ads as you want, and no one will know.

By this time it was after 2 p.m. and I was hungry for lunch. The main dining room had already closed, so I headed to the Lido market on deck 9 for a buffet lunch. Rotterdam Lido is made up of several food stations, including Homestead (hot lunch), Distant Lands (international cuisine, with stir-fry to order), Roasting Pan (meat cutting station) and Breadboard (sandwiches). The Sweet Spot offers a mix of baked goods and ice cream.

I love Holland America’s Wild Harvest Salad Prep Station, but I also wanted to try Indian Chickpeas and Vegan Chili at Homestead. When it’s vacation time, you don’t have to choose, so I stopped at both stations to pick up my lunch. I didn’t like the chili, but the chickpeas were delicious. I skipped dessert, thinking I would like a snack later.

The rain was falling pretty well and I wasn’t sure I could check the pool deck. Turns out that wasn’t a problem as Rotterdam has a retractable roof over its central swimming pool. The Lido becomes a solarium when the weather is bad so I was able to admire the beautiful pool and hot tubs. The deck above is filled with cushioned daybeds and lounge chairs, separated by privacy curtains, and I hope I can soak up the sun here later in the cruise.

I took a tour of the spa, which includes a thermal suite with a therapeutic pool and heated lounge chairs, as well as various saunas and steam rooms. I might be tempted to buy a day pass for $ 40 and relax in it. I even had a sample massage where the therapist demonstrated the herbal and hot stone poultice and worked a few knots in my neck and upper back for a few blissful minutes. It was a great advertisement for spa treatments, but since I didn’t win any spa credit at the raffle I’m not sure a hot stone massage will be in my future on this cruise.

Fast forward to 5pm Sailaway was delayed due to late deliveries and I needed a snack before my 8pm dinner. I passed New York Deli and Pizza on the upper level by the pool, which was listed as open, but the waiters were no longer offering pizza by the slice. Disappointed, I decided to check out the Grand Dutch Cafe.

The cafe overlooks the atrium and its spiral sculpture, with seating along the walkway for people watchers, as well as in a separate room with large windows overlooking the sea. The color scheme is Delft Blue and white (like the famous Dutch pottery), and the shapes of the menu display and hallway design resemble Amsterdam townhouses.

The Grand Dutch Cafe is technically a cash cafÃ© that also sells European beer and spirits. But it also offers free meals, some ready-made in a crate and others you order. I chose a chocolate chip cookie and an order of Friet & Mayo (fries with mayo and peanut sauce for dipping). The peanut sauce was so delicious that I probably ate more fries than I thought before dinner! Next time I could try the pancakes or the mini cheese soufflÃ©s.

I had dinner in the gorgeous main dining room, which is also designed in blue and white with eye-catching lights made from blue, white, and yellow glass balls. My dinner was not particularly noteworthy, the salad and veggie moussaka were tasty and the waiter suggested a banana crumble dessert which had a delicious topping and didn’t appear to be on the menu.

The towel animal waiting for me looked like some sort of unidentifiable rodent that clearly needed eyes to bring it to life. We’ll see if Holland America’s stewards have learned a thing or two from their Carnival counterparts, and if the animals improve during navigation.

Tomorrow I am exploring Bimini for the first time. Come back and see if I can find some fun in the Bahamas!