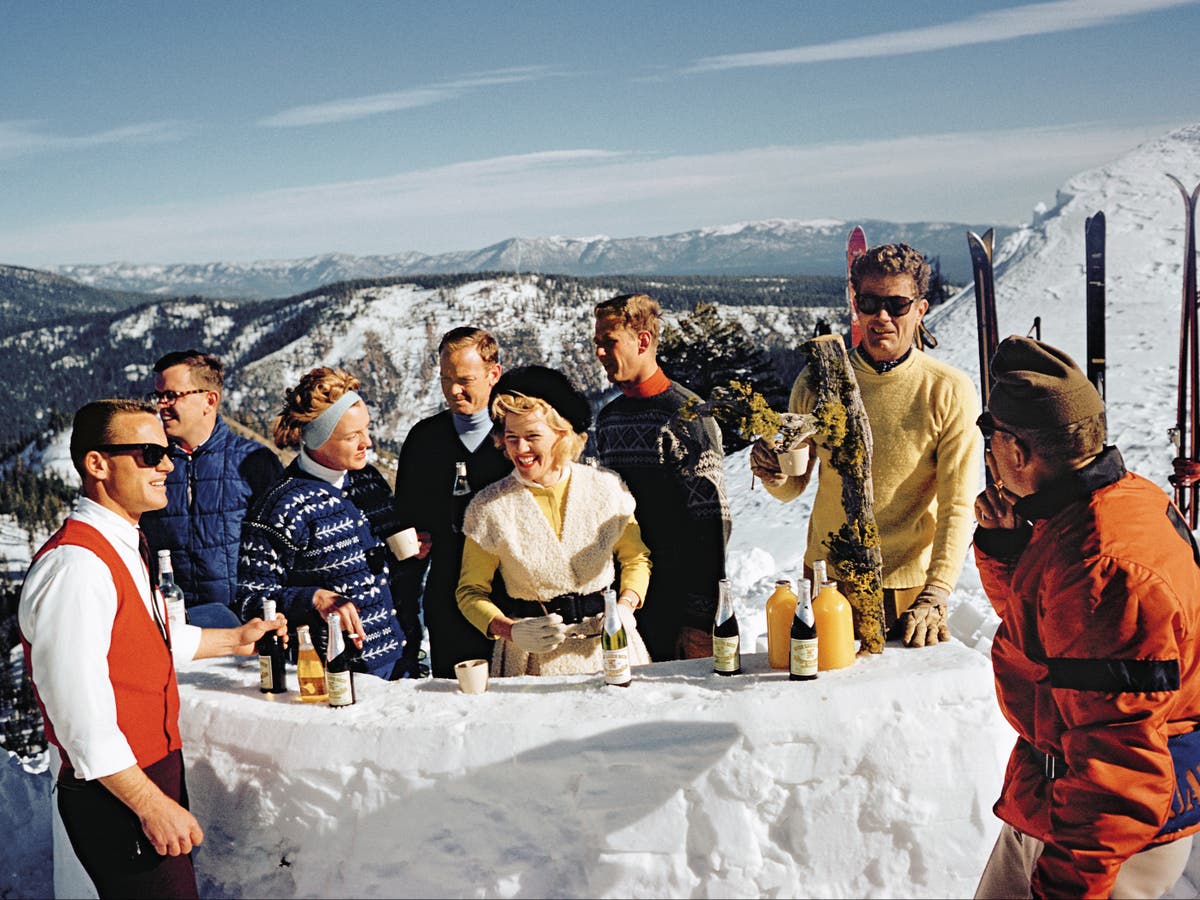 In 1954, around Christmas, photographer Slim Aarons went to Miami Beach on a mission for the magazine Holidays. From the walk, he spotted an umbrella shaped like a Christmas tree, planted in the sand next to a lounge chair. The stage was gold, but people had to come to life. Aarons took action. At the time, Miami didn’t have a model agency, but Burdines, a high-end retailer where models tried on clothes for interested customers. Aaron asked the fashion coordinator for advice. The fashion coordinator recommended Mary Ballou Stevenson, a model who worked in the store’s tearoom.

Aarons asked Ballou if she could take a few minutes, put on a swimsuit, and meet him at the beach. The model agreed. By the time she got off, dressed in a coral swimsuit and hat, Aarons had her camera and tripod set up. Quickly, he led her, taking a few pictures. During this time, a man passed by on the promenade. Aarons also recruited him, asking him to go and lie down on another lounge chair in the background. The man did so. A few shots later, Aarons thanked his two models and let them go. He had it – Ballou lying in the chair, the hat tipped slightly over her face, with the mysterious man lying face down in his own lounge chair. In between, the odd tree umbrella, and an even stranger heap of gifts on a small table.

The whole thing, according to author Shawn Waldron, who spoke to Ballou, was done in 15 minutes. That’s all the time it took Aarons to compose the definition of a striking photo – a photo that still fascinates 67 years later. “It was Slim”, says Waldron The independent in a telephone conversation. â€œHe just packed his bags and moved on. “

Aarons, a U.S. Army veteran who got his start as a combat photographer, is best known for his photos capturing the lives of celebrities, socialites, and luminaries. Aarons himself said he wanted to photograph “attractive people doing attractive things in attractive places.” His many subjects included such familiar names as Salvador DalÃ­, Jackie Kennedy, and Louis Armstrong. But a conversation with Waldron, a curator at Getty Images, Aarons’ archive manager and co-author of the recently published book Slim Aarons: Style, points to the depth of Aaron’s work and the meaning of his search for beauty.

Born October 19, 1916 on the Lower East Side of Manhattan, Aarons claimed he grew up as an orphan. It wasn’t until 2016 that a documentary revealed that this wasn’t entirely true: His mother was institutionalized as a child due to mental illness. His father, according to Waldron, “essentially abandoned the family,” and his brother committed suicide. â€œThere was a lot of conflict,â€ says Waldron. Aarons joined the military at a young age, serving as a war photographer during World War II.

These years shaped Aaron’s profession for years to come. Photography, says Waldron, gave structure to his life. Working on assignments nurtured an eye for reporting that would define his style for the rest of his career. Aarons returned from the war with mental scars, after witnessing terrible events. While other photographers chose to continue working in combat zones, Aarons needed something else.

â€œAfter the Korean War started, he was asked if he wanted to go on a mission with other photojournalists who were sent there,â€ says Waldron. “And he said jokingly,” The only beach I’m going to land on is going to have blondes and bikinis. â€œIt laughs at that, but it talks about his mentality and where he came from.

Aarons turned his camera lens to glitter, but he never lost his journalistic instinct. At the end of his career, he searched for a place for a few days, without even taking his camera. He spent that time talking to people, getting a feel for the action. â€œHe would have an idea of â€‹â€‹what was going on. Where are people going to eat? What is the good side of the mountain? When does that look good? â€ said Waldron. â€œIt would be just him, all alone, walking into shops, restaurants, chatting with the butler, the waiters, the bartenders. He always did his basic job.

By exploring his surroundings, Aarons was able to stage and snap memorable photos – such as Ballou, the man with no name, and the Christmas tree umbrella – in minutes. Many of his photos exist at a mystifying intersection between posed and candid; his subjects are aware of his presence, and they pose often, but even in such moments, they don’t seem quite in control. These are subjects under Aaron’s lens. â€œHe was an editorial photographer,â€ says Waldron. â€œHe was first a photojournalist. For a man who had that booming voice and was 6’4 ” tall, he was very good at being a fly on the wall.

Some of Aarons’ photos are more formal than others, but the people in front of his camera wear their own clothes and pose in their own surroundings. Aarons, says Waldron, worked almost alone, perhaps with an assistant, but without a stylist or hairdresser and makeup artist. There is something telling about asking someone to do their hair for the camera. It’s a way to find out not only how they see themselves, but also how they hope to be seen.

Aarons died in 2006 in Montrose, New York. The New York Times praised him in an obituary for his charm which “won the trust of the jet set and movie stars” and for his work, which “captured fleeting, golden images as his favorite subjects played and preened in an intimacy almost unimaginable today “.

It is Aaron’s sense of humanity, for Waldron, that sets him apart and allows his work to stand the test of time. â€œHe was always looking for a human moment,â€ says Waldron. “And he had an eye for that timeless quality.” Aarons, he adds, citing fashion designer Michael Kors, who he spoke to for the book, spoke of style, not fashion. â€œFashion is tied to time,â€ he says, â€œwhile style is eternalâ€.