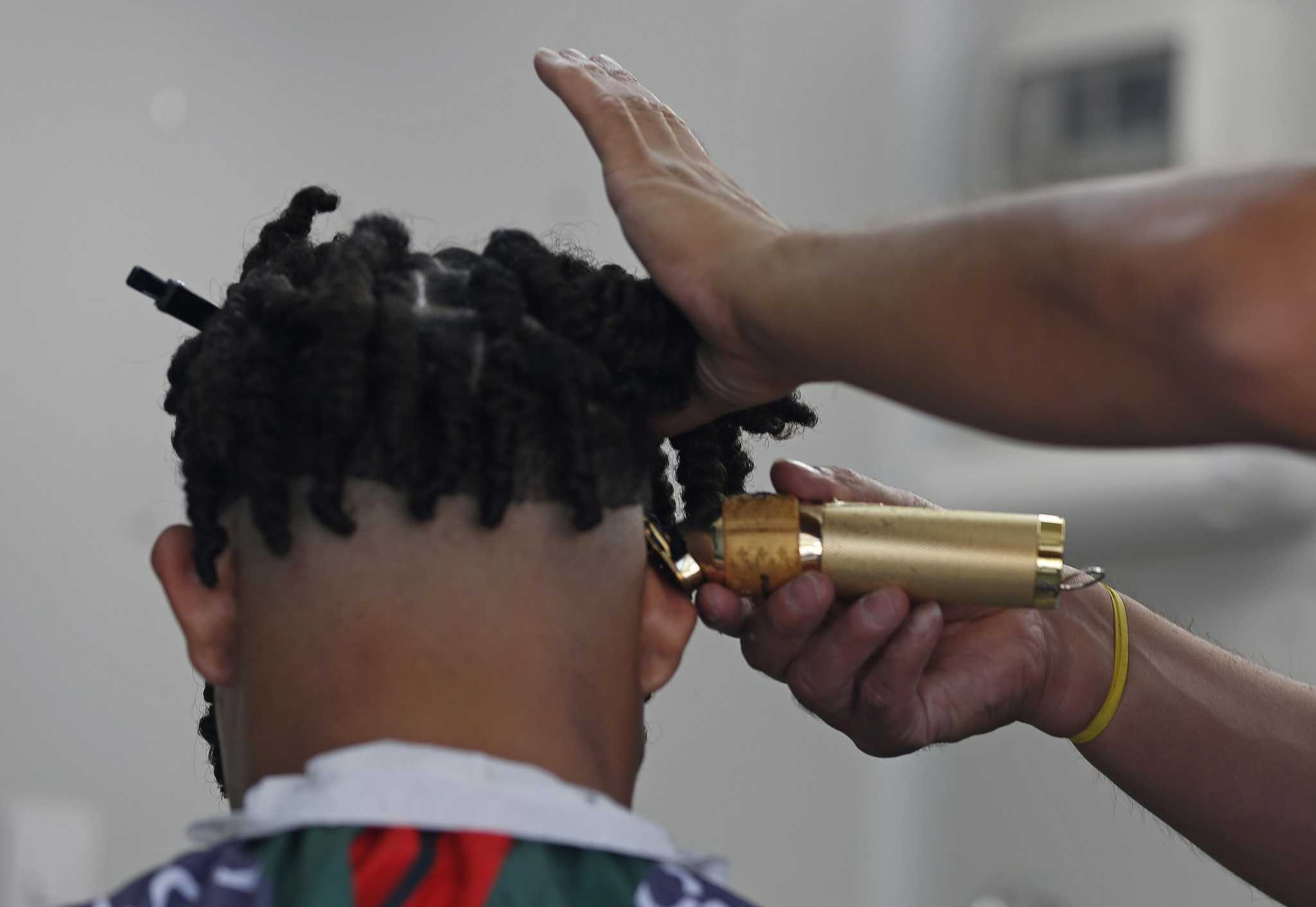 Inside the Big Shots Barber Lounge in Flores, it was chilly.

The 46-year-old barber, wearing a dark blue New York Yankees baseball cap, greeted the trio. Flores clicked on his silent clipper to cut Ramiro’s mop of hair first as his brother tapped a game on a cellphone.

“They call me little Julio; he’s the great Julio,” the young man said with a nod to his father. Old Garanzuay looked around at the barbershop on wheels.

The 14-by-7-foot trailer was parked on a lot at Potranco and Loop 1604. It has a diamond-plated silver sheet floor. A flat-screen TV, connected to WiFi, anchored in a corner near the door. Jars of Johnny B. Mode styling gel and Pacinos styling paste sat on shelves. A portable air conditioner, powered by a two-ton mini-split generator, cooled the white-walled space. Bolted to the outside is the barbers calling card – a red, white and blue striped barber pole.

The Salon de Flores is a reflection of the changing times of the coronavirus. This is one of many mobile salons offering on-the-go haircuts across San Antonio. Flores cuts her clients’ hair six days a week in the parking lots on the northwest side. He posts spots where he will be on social media, including Instagram and Facebook. Longtime customers and new ones alike flock to his black mobile grooming trailer pulled by a white Dodge Ram truck.

This is a carousel. Use the Next and Previous buttons to navigate

Before the pandemic, Flores had a fixed location near the South Texas Medical Center, with a strong client list. Offering haircuts on the go became an option when the virus brought business to a halt.

In January, he started thinking about the food trucks around him and wondered if he could customize a shop on wheels. Flores said he consulted with The Fud Trailer Co. He wanted a trailer stripped of interior appliances, built to his design.

He saved for the first payment for the double axle trailer which costs between $13,000 and $18,000. The only remnant of a food truck on the custom trailer was a service window. A friend fitted a 12,000 watt generator which powers the unit. On May 19, Flores picked up the trailer. After 30 days of preparation and paperwork, he rolled his grooming station on the road.

“I wanted to create something different,” Flores said. “More of an on-site service.”

A 22-year veteran of the Air Force, Vincent T. Davis embarked on a second career as a journalist and found his calling. By observing and listening to San Antonio, he finds intriguing stories to tell about ordinary people. He shares his stories with Express-News subscribers every Monday morning.

On ExpressNews.com: “My Way”: Dare helps a San Antonio retiree find a calling as a professional singer

He became interested in the art of grooming as a little boy when his grandfather took him to a barber shop in Nacogdoches. Flores was captivated by the barber, Mr. Arriola. The man, in his sixties, wore sharp, ironed clothes. He used clippers attached to a clear plastic hose that sucked up the shorn hair. But the most impressive thing about the barber was his two-tone Mustang 5.0, a clean gray-bottomed, blue-topped machine parked outside.

Flores learned to listen without bias, not to interrupt, and to store information for future access. Arriola let Flores use his first clippers to touch up the regulars’ hair. His lessons took place under the fixed glass eyes of a deer’s head hanging on a wall. The two-chair shop carpet captured the smell of blue hair tonic and white barber’s powder.

Ten years ago Flores moved to San Antonio and worked at Ray’s Barber Shop on the West Side. He said Ray Gonzalez taught him about life and how to use money to make money. Flores shares these lessons on his YouTube channel called “Big Shots Barber Lounge”.

“I’m letting other barbers know this is the future,” he said. “I want to show that there are a lot of opportunities here. Saving time and fuel is a real convenience for customers these days.

After Flores had finished combing Ramiro’s hair, Garanzuay motioned for little Julio to get into the chair. The youth grimaced as the barber tied the cape around his neck. When he finished, Julio was ready to get up from the chair.

“Do you want gel in your hair?” Flores asked the youngster.

His dad said, “You need gel.

“Yeah,” Flores added, “let’s see what it looks like with a product.”

The barber applied blue gel in the boy’s hair. He leaned back, like an artist looking at a painting, and inspected the smooth locks lying on the right, above the shaved sides.

Julio looked in the mirror and gave his approval. As traffic stopped at 5 p.m. on 1604, Abel Orta, 42, entered with his 16-year-old son Matthew. The teenager wanted a tapered cut. The Ortas followed Flores for a few years, happy with his grooming style.

“I love seeing him improve and thrive in the business,” Orta said. “He’s a go-getter.”

Driving to get Flores’ hair done is no problem for father and son.