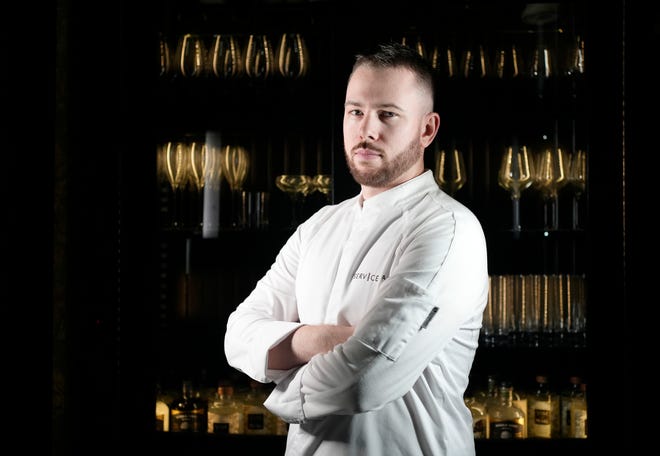 The famous Service Bar restaurant reopens with a new chef

In just 10 years, Chris Connolly has gone from working as a volunteer chef to taking charge of the kitchen at the Service Bar, known as one of the most creative kitchens in central Ohio.

It’s been quite a journey for the Youngstown native, who had no restaurant experience other than washing dishes until he was 21.

Connolly, 31, is part of a new generation of chefs, using dehydrating techniques, emulsifiers, imported oils, dozens of ingredients in one dish and working for hours on beautifully presented but mouth-watering plates.

“Every dish is meant to be simple on the plate but complex in taste,” Connolly said.

For example, a chilled entree features Chioggia beets which are braised in spices, herbs and vinegar, smoked and cut into bite-size pieces. Burrata, on the other hand, is a soft and sweet version of mozzarella cheese. The curlicues on the plate include licorice powder and homemade oatmeal granola with vanilla and fermented honey.

“I believe in doing things authentically,” he said. “I don’t do things, just do them.”

The halibut is dried in seaweed and plated with potatoes and enhanced with piccalilli mustard and Kashmiri curry for a spicy bite.

The Service Bar is one of the few places in central Ohio where diners can find gnudi, known as a whimsical Italian dish similar to gnocchi. The ricotta-based dish includes eggs, Parmigiana-Reggiano, blackened shaved truffle and turmeric for a sunny appearance, along with mashed butternut squash and celeriac sauce.

Some dishes are gluten-free and there are plenty of vegetarian options.

Service bar ravaged by COVID, forcing the restaurant to offer only takeout for six months and to close for 18 months. The restaurant reopened on October 13 with Connolly at the helm.

When he decided to pursue a career in the culinary arts, Connolly studied cookbooks religiously before moving to Chicago to be chosen as an intern, a kind of on-and-off apprentice chef, at famed three-star Michelin restaurant Alinea. .

With the support of friends and family, he worked for free for two months, accepting any job the estate offered him.

He left for the Inn at Little Washington in Virginia, another three-star Michelin restaurant, where he started picking vegetables, moved on to butchering, and eventually became a chef.

After more than 3 years, he moved to Amangani Resort in Jackson Hole, Wyoming, where rooms start at $1,000 a night and superlative food is an expectation, Connolly said.

“After the shift, I fell in love with nature,” he said, traveling 1,000 miles in each direction to explore the West.

He began his journey back to Ohio after a detour to The Greenbrier, West Virginia, another resort town known for its fine menu, where he became a chef.

At the Service Bar, Connolly said he would change the menu often, but was less likely to do what is considered a seasonal menu.

The space, with an impressive rustic backbar, seats 75, which includes a private dining room.

“To find a chef of this caliber from Ohio, and in Ohio who lays low, I feel like I hit the jackpot,” said David Albright, the restaurant’s hospitality manager.