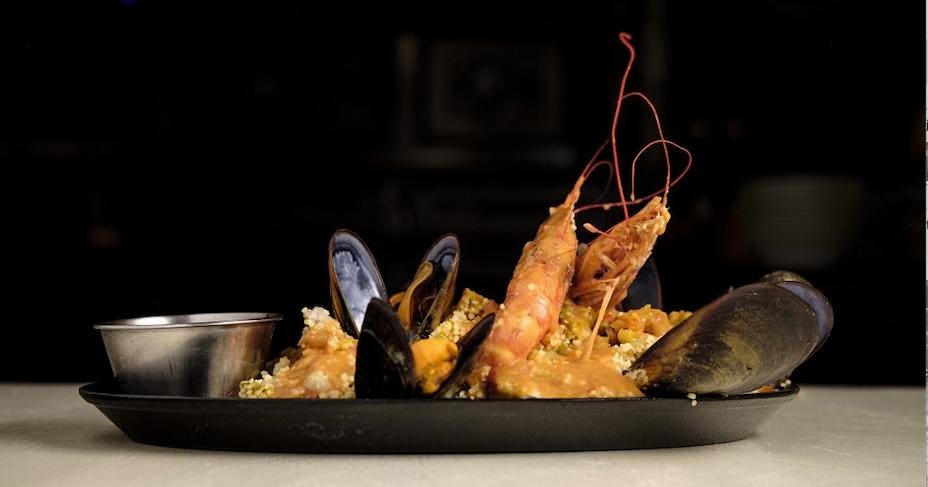 Anyone looking for new twists on Italian cuisine should know the cuisine of Liguria, the coastal region in the northwest of the country where the Italian Riviera is located. While two of Liguria’s staple dishes – pesto and focaccia – have found their way onto menus around the world, there are many other dimensions to the region’s cuisine beyond these delicious mainstays. Andrea Ballerini, one of the most dynamic restaurateurs on the Italian Riviera, has dedicated himself to exploring some of the lesser-known culinary routes of his territory. For one of his restaurants in Sestri Levante, La Sciamadda dei Vinaccieri Ballerini, he included a historic form of Ligurian cuisine, a hybrid style called tabarchine cuisine, which blends the flavors of North Africa and Sardinia with those of the Riviera.

Ballerini says he has always been very interested in the history of Ligurian cuisine and has sought out 19th-century cookbooks to study different ways of approaching the cuisine of his region. Meetings with the late famous food journalist Franco Accame and cooking specialists like Sergio Rossi, author of the book, The Kitchen of Tabarchini, encouraged his interest in the under-the-radar tabarchine style of cooking, as did his passion and involvement with an ancient Ligurian sailing ship, the leudowho sailed the coastal waters of the Riviera for centuries and regularly visited islands such as Sardinia, Elba and Sicily, carrying wine and food.

Tabarchine cuisine is the cuisine of the group of settlers who left Genoa in the 1500s to live on the small island of Tabarca off the coast of Tunisia, which offered opportunities for good coral fishing. Two hundred years later, these transplanted Genoese moved again, for political reasons and more coral, and colonized areas of two small Sardinian islands, San Pietro and Sant’Antioco. The dishes they crafted over the centuries incorporated the diverse flavors of their new homelands.

Intrigued by this unique food culture, Ballerini began to develop contemporary tabarchine recipes for La Sciamadda. When planning the menu, Ballerini said he wanted it to be seafood-based, but “different from everyone else”. And it is indeed the case. La Sciamadda is the only restaurant serving tabarchine cuisine in Italy outside the town of Carloforte on the Sardinian island of San Pietro, says Ballerini, where many Genoese expats lived after leaving Tunisia. (In addition to offering Tabarchina cuisine, parts of the San Pietro Islands, particularly Carloforte and Sant’Antioco, are home to a rare Ligurian dialect, called Tabarchina.)

You will find a number of tabarchine dishes at La Sciamadda. Among them is a distinct lasagna cooked with steamed tuna or bonito, pesto and tomato sauce. (In addition to harvesting coral, Genoese settlers became renowned tuna fishermen, so, unsurprisingly, tuna is common in Tabarchine cuisine.) Their Cascà, a Tabarchine version of couscous, is made with shrimp, mussels and diced vegetables. “Cascà is the definitive recipe that brings together all the influences – couscous from North Africa, fish typically found in the waters of Sardinia, and the vegetables are steamed Ligurian style,” says Ballerini. The cassolla, which Ballerini describes as Carloforte fish stew, comes from an ancient recipe with mussels, prawns, clams, octopus, tomatoes and bruschetta. He explains that it used to be “a bad soup”, but today it’s not cheap to produce.

La Sciamadda’s menu is not limited to tabarchine cuisine; here you can taste modern and classic Ligurian specialties such as branzino prepared Ligurian style with olives, potatoes and pine nuts; “Maé” spaghetti with a variety of local seafood; and a traditional fritto misto with calamari, prawns and anchovies. At Ballerini’s reasonably priced Aragosta D’Oro, where some items are inspired by Genoa’s street food, you can order testaroli pasta and panigacci bread (both typically from the Lunigiana region which includes places in Liguria and Tuscany), as well as various salamis and charcuterie from local producers. Testaroli and panigacci have a similar recipe; testaroli are often served with pesto, sometimes shaped like a pancake or torn into small triangular pieces. Panigacci, cooked in the form of flat discs, can be served savory, with cheese and salami, or sweet, with chocolate. The testaroli and the panigacci date from antiquity.

While focaccia is ubiquitous throughout Liguria, there are 12 varieties of dough-based breads to try at Ballerini’s Don Luigi restaurant on Viale Rimembranza facing the sea (there are additional seats on the beach). Other Ligurian dishes at this lively place include cuculli di baccalà, a type of donut from Genoa; Ligurian ravioli called zembi; and the popular pansoti with walnut sauce and trofie al pesto.

The Ballerini also see their cooking classes as a way to introduce authentic Ligurian cuisine. These courses, ranging from the basics such as making pesto or the Ligurian pizza called Sardenaira, to more detailed fish and dessert courses, are available year-round except on public holidays and can accommodate from one to 100 participants.

When I was in Liguria recently, Andrea and Daniele Ballerini showed how to make corzetti with pesto (corzetti are medallion-shaped pasta engraved with historical designs). The Ballerini’s have alternated know-how with stories about the region’s food culture, which helps you understand the reasons behind the meticulous sourcing to ensure authentic, local flavors. So that means basil leaves from Pra, near Genoa, noted for producing a type of plant without undertones of mint (found in some varieties of basil); Pisa pine nuts; Garlic Vessalico (grown in the Ligurian mountains); locally sourced olive oil and Pecorino Romano cheese. To mix everything together, Daniele uses a mortar and pestle (“the oldest mixer in the world”, he says) made of red marble from the nearby town of Levanto, which he likes because it provides the right amount of friction for turning. Ingredients. in paste. Tricks for producing the pasta dough (with grano duro flour and eggs) included adding marjoram, cheese and even a little white wine to the dough, which is then left in the fridge for several hours before being rolled (“flatten it like pizza,” says Daniele) and cut with special molds. The Ballerinis use corzetti molds made by the famous Picetti clan in Varese Ligure.

The Ballerinis are active wine producers with 21 different labels – reds, whites and Kaligo sparkling wine. They refer to themselves as vinaccierithe term used to describe wine merchants who sailed Thursday transporting their goods on the seas of Liguria from the Middle Ages. The Ballerinis take a leudo to travel to and from the island of Elba for their wine business, saying they want this aspect of Liguria’s culinary history “not just to be told, but to be experienced”. They are restoring their own leudo, and hopes to sail next year to the islands off Sardinia where the Genoa/Tabaraca coral fishermen have settled. When he talks about his enthusiasm for Thursdaysays Ballerini, “It’s not a recreation, but a continuation of a tradition and an opportunity not only to bring the wine but also a cultural message.”