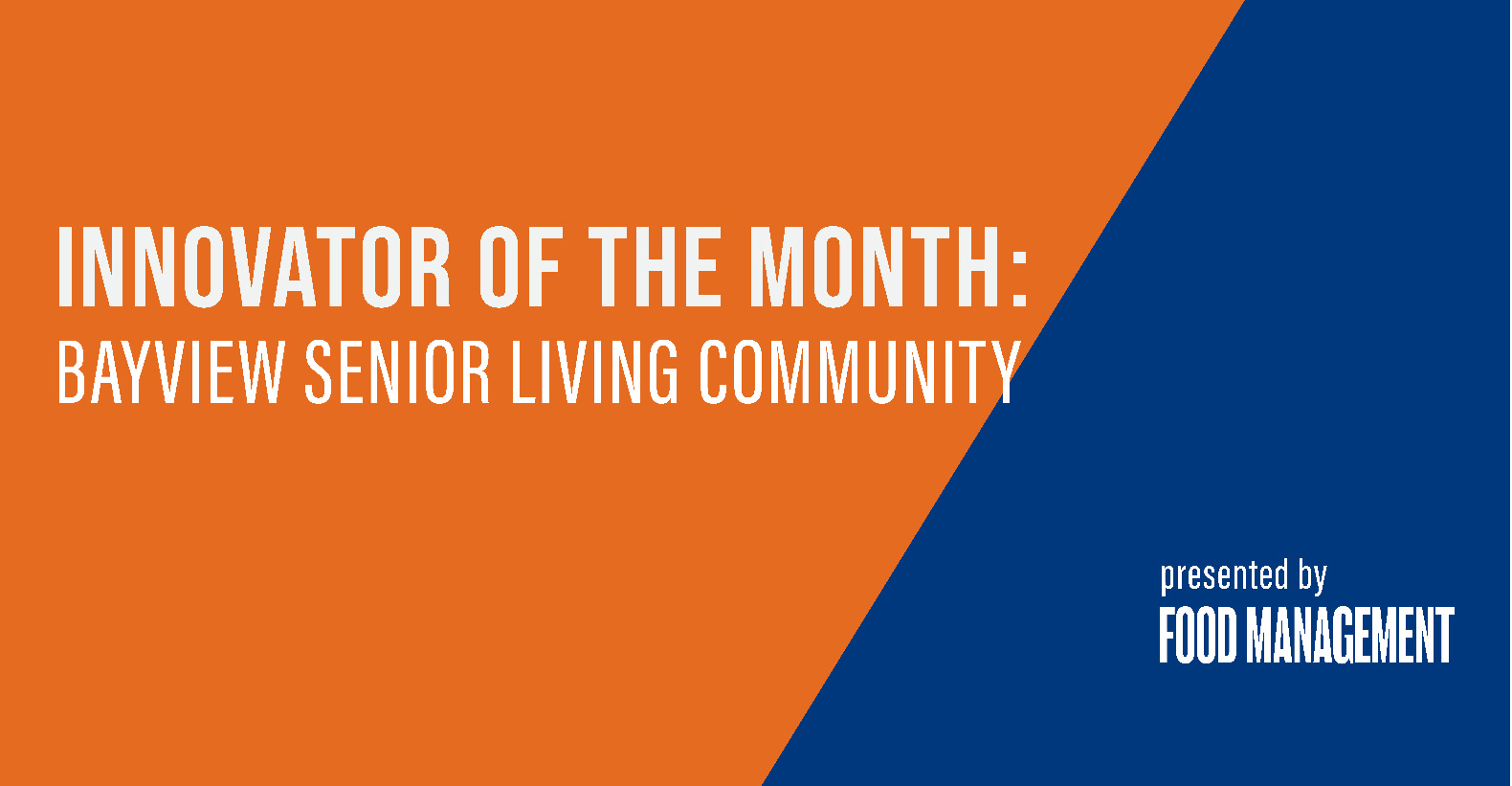 As the Bayview Senior Living Community skyscraper in Seattle neared its 60sand anniversary in 2021, it was definitely showing its age, so its board undertook a major renovation to update just about every aspect of the 10-story building ahead of the anniversary. This project ultimately involved refreshing existing residence halls and adding new ones – plus a new memory care wing – as well as updating or adding new amenities, particularly in the dining program, which was completed with two new outlets—the Monsieur Pickles bistro and the Cloud Room Café—as well as a complete renovation of the Terrace Garden dining room.

The aptly named Cloud Café is one of the highlights of the building’s renovated rooftop, which offers panoramic views of downtown Seattle and surrounding topography, like Puget Sound and the Olympic and Cascade Mountains. Cloud Room serves as a weekday alternative breakfast venue to the main dining room with an upscale menu and 44 seats, including 16 on an outdoor patio.

“If you want your traditional breakfast, we have everything in the main dining room,” suggests Director of Culinary Services Dan Galvin, “but if you fancy something a little more elegant, at the Cloud Café, we serve things like French crepes, bagels and lox, special frittatas and homemade pastries and croissants, as well as espresso-based drinks.

Related: Nominations are now open for Food Management’s Best Concepts Awards Program for 2022 winners who will be honored in July.

The Cloud Café breakfast service operates from 8:00 a.m. to 10:00 a.m., after which the space is available for a variety of social activities. “They can have lunch at Pickles or Terrace Garden and bring it there,” says Galvin. “We also have happy hours up there and in the evenings we have lots of winemaker and guest chef dinners.” The space also hosts celebratory dinners, holiday parties, and family gatherings when pandemic-related policies permit.

Mr. Pickles, named in memory of a cat the community adopted a few years ago, is located near the updated wellness center with its new indoor heated pool and gym equipment, and serves a menu wellness-based monthly between 11 a.m. and 3 p.m.

Mr. Pickles primarily offers take-out and is “a great way for staff to eat their meals for the day while enjoying the company of the residents,” observes Galvin. The space was largely unused, so when the wellness area was expanded and updated, “we thought it would be a great central place to put something where staff and residents can meet while taking advantage of healthy options”.

Regarding this menu, Galvin describes Mr. Pickles as an alternative to the main terrace room, “so whatever you get at the bistro is completely different from what’s on the menu upstairs.” Choices include freshly prepared sandwiches and salads to take away, as well as made-to-order options such as pizzas on flatbread, as well as homemade soups different from the soups of the day in the terrace garden, as well as personalized smoothies , coffee and frozen drinks, and ice cream and frozen yogurt in cones and cups. Each month offers a fixed menu increased with sandwiches/salads, pizzas and soups of the day. There are about half a dozen tables inside and an outside patio with a few more. 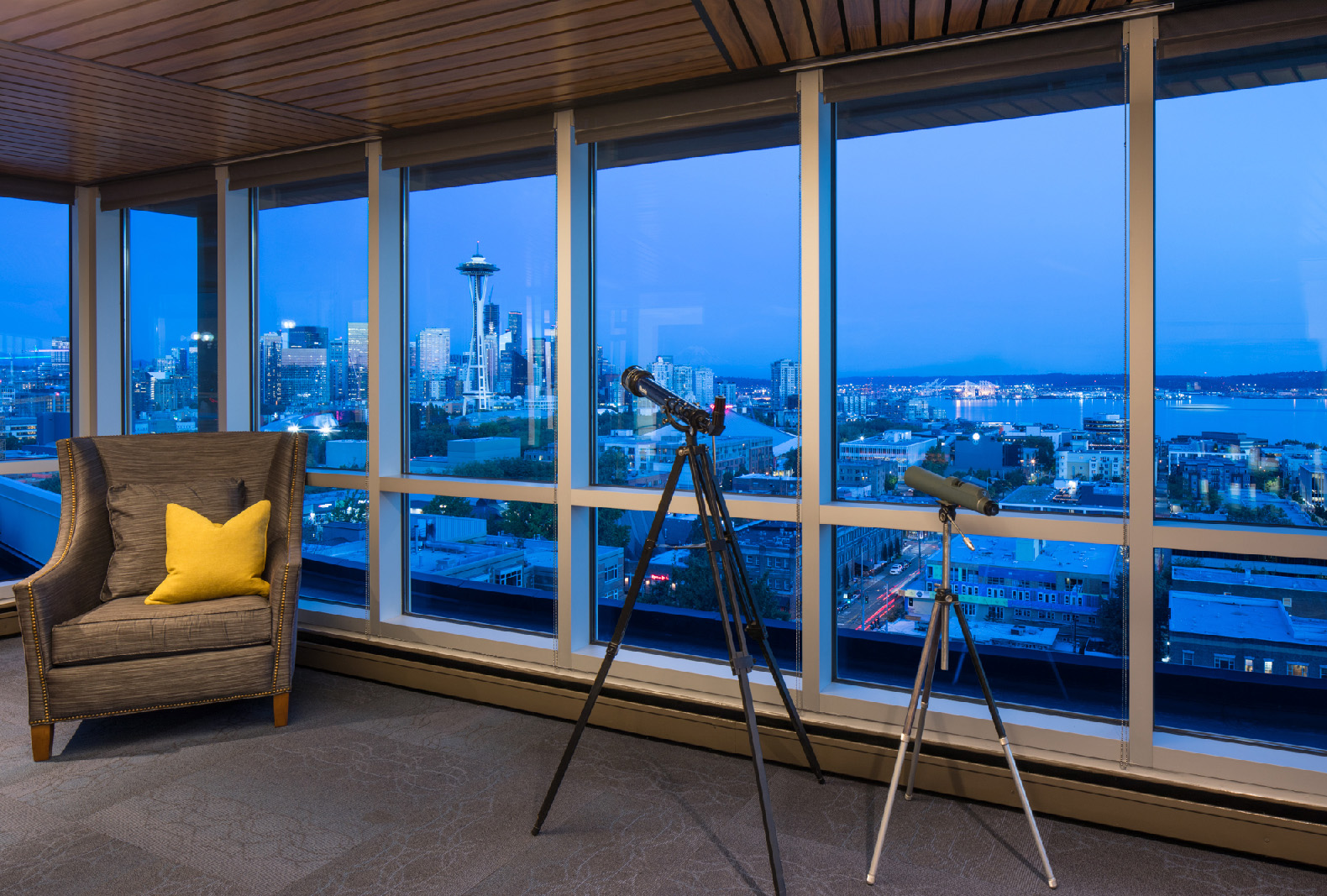 The Cloud Café lounge hosts happy hours as well as winemaker and guest chef dinners for residents, as well as celebratory dinners for families when pandemic-related policies permit.

In addition to cosmetic upgrades such as new light fixtures, carpeting and decorations, the terrace garden has been completed by the renovation with sliding doors that allow it to extend seating in the lobby to accommodate increased numbers, like the holidays. Also new is an action station complete with burners and refrigeration that features special themed meals like a taco bar, “Night in Italy” or a “seafood shack” where diners can hop on and get something something on order.

“This is truly the greatest fun addition to our dining room,” Galvin remarks. The renovation also extended table service to the terrace during the summer for the first time. The Terrace Garden is open daily for all three parts of the day, with the dinner menu changing nightly, but always offering three to four entree options – usually a chef’s special – with seafood from local vendors Featured.

“I’ve been here almost 14 years and I’ve never been able to get fresh salmon off the Sunday menu,” laughs Galvin. “Residents look forward to it every week and it’s probably our biggest seller.” 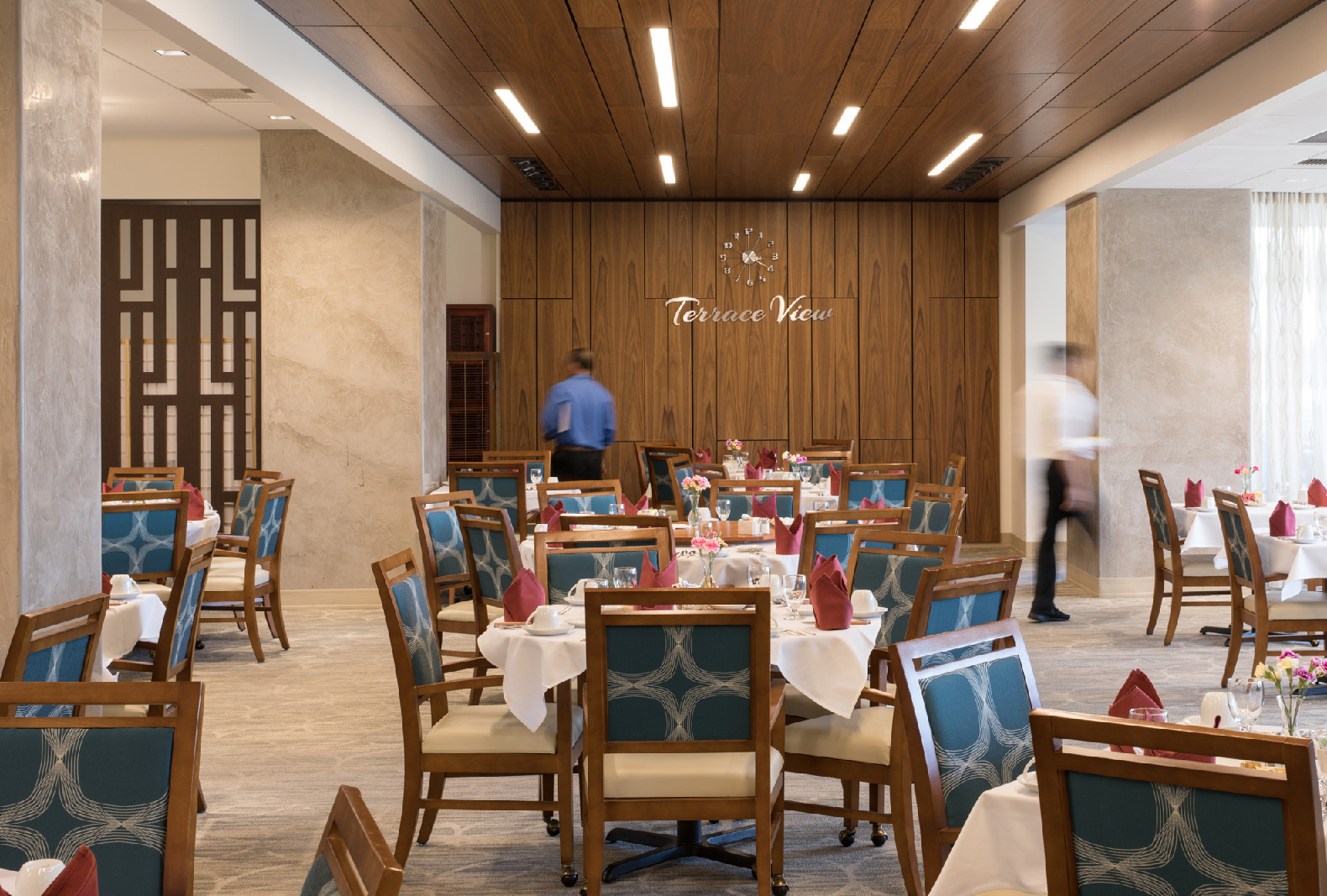 Terrace Garden’s lunch menu, meanwhile, changes weekly but always offers more than a dozen choices, including two or three salad options with organic and local ingredients. Local sourcing also involves sourcing produce from a greenhouse that has opened onto the terrace garden patio and will eventually also include the bounty of a rooftop herb garden being built near of the Cloud Cafe. Both are maintained in part by residents as well as staff.

“Involving our residents in our culinary program is something we really want to emphasize and do more of as we move forward,” Galvin remarks.

Breakfast at Terrace Garden offers an extensive selection of traditional dishes ranging from waffles and French toast to Eggs Benedict and ‘Eggs a Hundred Ways’ complemented by plenty of fresh fruit.

“We really want to be a culinary destination for residents,” Galvin points out, noting that the program has to compete for residents’ restaurant dollars with many nearby commercial restaurants, Bayview being in the middle of Seattle’s Queen Anne neighborhood. near the iconic Space Needle, Seattle Center and the new Climate Pledge Arena.

“We encourage our residents to enjoy the neighborhood they’re in, we want them to get out and go somewhere else,” Galvin offers, noting that the Bayview Restoration Program for self-employed residents operates on a commercial basis that doesn’t bind residents. to on-site options, so it must compete aggressively to attract business. “Selfishly, of course, we want them to take advantage of our dining options more often than not, but you really can’t avoid the competition – we’re too much of a culinary mecca here,” he says, “but our first priority is to entice them to dine here, where they know they can get a great meal with great service.”

In addition to these three retail restaurants, the Bayview catering program operates separate dining facilities for skilled nursing, assisted living and memory care, as well as a meal service for an operation of on-site intergenerational child care for families in the neighboring community.

The new Memory Care Unit has its own communal dining room while residents of the Assisted Living and Skilled Nursing Units can receive several daily meal deliveries to their rooms, although “our goal is obviously to have them go out, but if they can’t or if they’re not feeling well, that’s part of the service here,” says Galvin. “However, for independent living, we do encourage residents to go out, but they also have the option of ordering room service for every meal every day of the week from the main menu in the dining room for a fee. small supplement”, although this tariff has been lifted since the start of the pandemic and has not yet been reimposed. Daily menus are available in paper and electronic form, including on the establishment’s television channel, and ordering is done either by telephone or online. 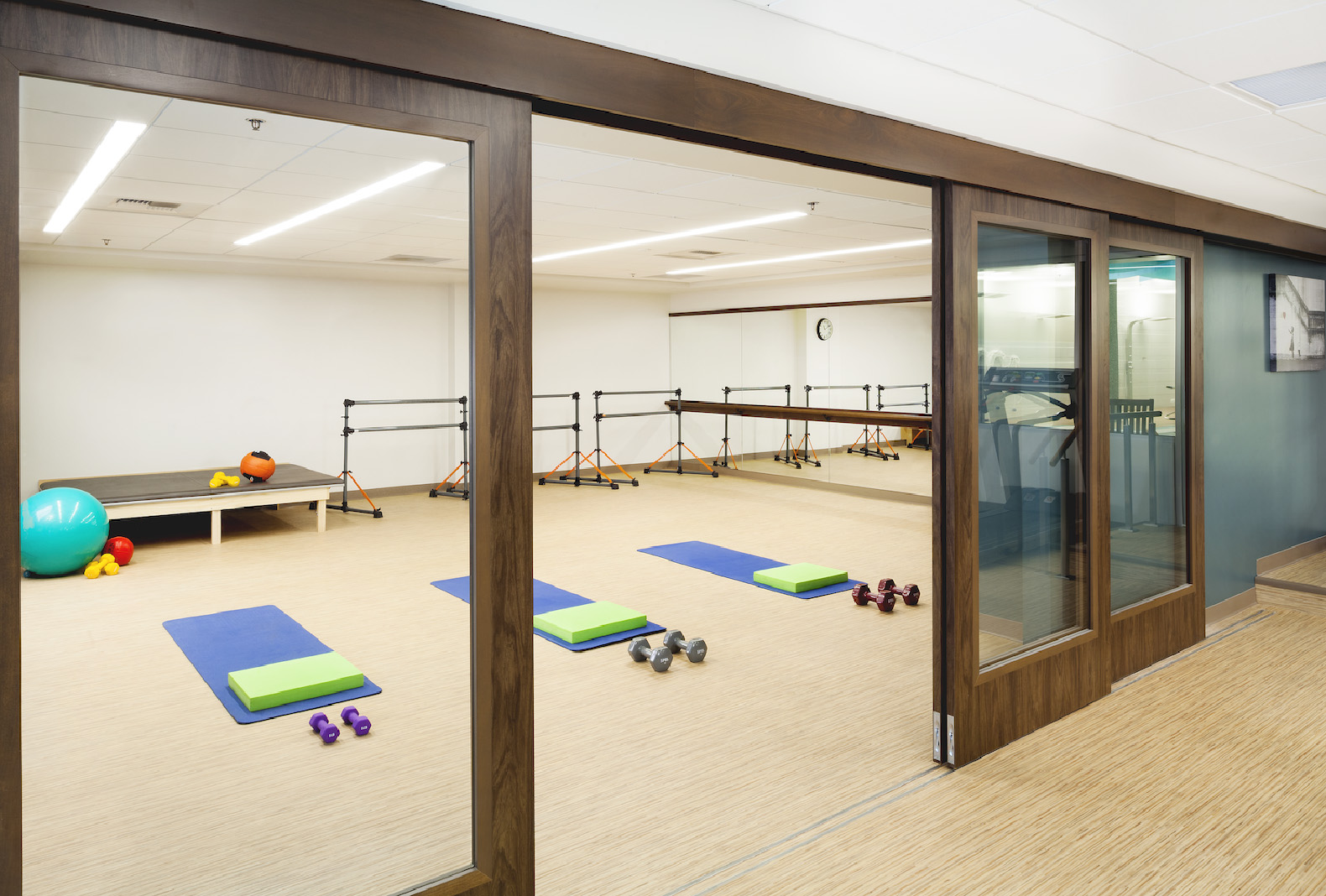 Amenities added or expanded at Bayview recently include a new fitness center located near the new Mr. Pickles Bistro and its healthy selections made to order and take out.

Pre-ordering is also available for every meal every day at Terrace Garden but not at Cloud Café and Mr. Pickles. “It’s especially popular during the warmer months when people can pre-order, pick up food, and then hit the parks near the Seattle Center,” Galvin observes.

The pandemic has certainly challenged the catering team to maintain the kind of quality and choice they had established with their recently updated schedule and new venues, which was “coming into full swing” when COVID hit. , said Galvin. “We had to go to what I call a ‘knock and drop’ service where you delivered meals that you hung on doors,” he recalls.

In response, the program developed remote social events around food and drink early on to keep residents engaged, such as virtual Zoom wine dinners where food and drink components were delivered to each room prior to the Zoom-based meeting. Later, as the pandemic began to recede, the Terrace Garden was converted to a food court type operation which allowed it to begin a sort of community food service while maintaining safety protocols.

“It became very popular because it allowed residents to have different options and socialize, even though people had to stay six feet apart,” Galvin notes. It’s something close to the heart of the veteran restaurant manager, whose previous experience includes catering with accommodation chains Red Lion and Doubletree, running his own restaurant for half a dozen years and managing of the famous French restaurant Maximilien at Pike’s Place Market in Seattle. He first joined Bayview as a consultant when the restaurant program was much more traditional and limited, but fell in love and saw opportunities in bringing his commercial restaurant experience to the community, resulting in new locations and updates.

“There is nothing more rewarding for me than bringing the quality and ambiance of a restaurant to the community,” he says.