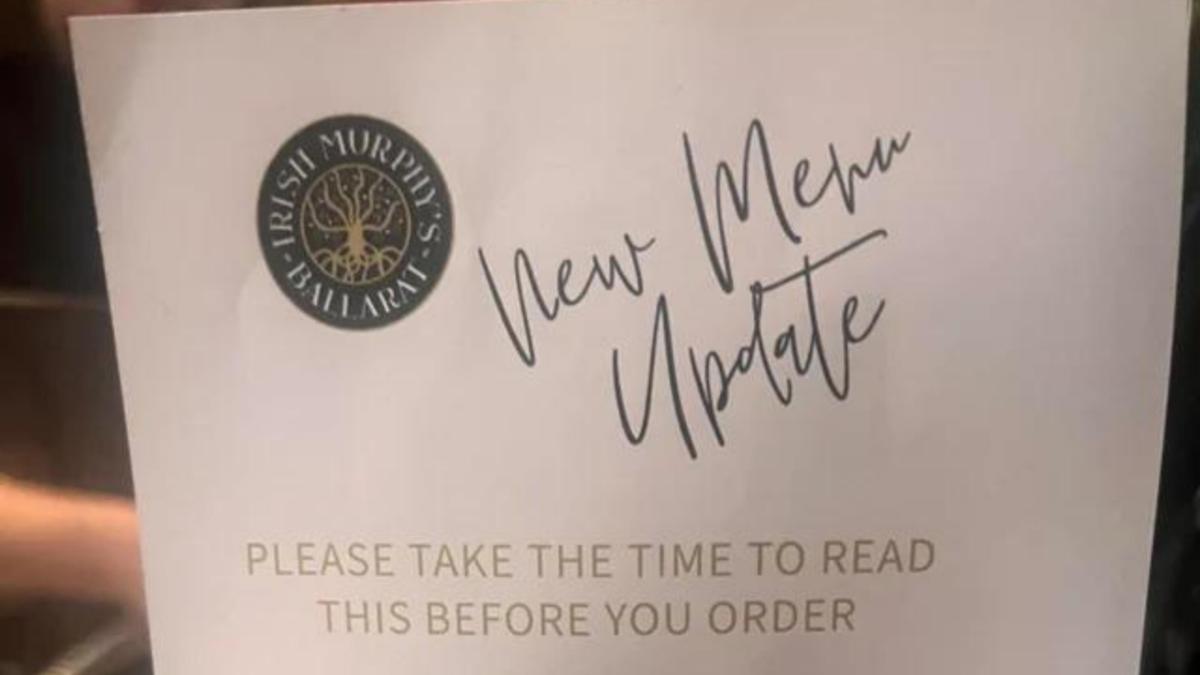 An update to an Australian pub’s menu has sparked an intense debate on social media.

Posting on Reddit, a restaurant at Irish Murphy’s in the Victorian town of Ballarat shared the message that had been placed on the counter.

The notice informed customers that salad and vegetables would no longer be served with main meals to reduce food waste and costs.

For more food news and videos, check out Food >>

The pub said diners would now have to pay extra if they wanted to have greens with their dishes.

The menu update read, “Please take the time to read this before ordering.

“To limit our prices and our waste, the salad and vegetables are no longer presented with your meal.

“They are still available for purchase as an accompaniment.

“I appreciate your understanding.”

The split sign drew a huge backlash on Reddit, dividing users on whether it was a reasonable decision on the establishment’s part.

Some were outraged by the update.

“At this point, why even bother going out for a meal?” one asked.

Another wrote: ‘So what do they just cook a steak or schnitzel with nothing else on the plate if you don’t order a side?

“I mean, they tell you in advance how it’s going to go, so I guess people can make their own decisions, but I would find that off-putting unless there was a significantly lower price for the main than before.”

Wrote a third: “Next it will be BYO plates and cutlery.”

Added another: “There are other methods to counter this, like asking if they would like a salad included when ordering. It sounds like a method to increase profits, not reduce food waste.

But many others felt it was a fair move by the pub, especially given the rising price of fresh produce across Australia.

“I actually don’t hate that idea because someone who worked in the hospital the number of times the plates came back with vegetables or the side salad wasn’t even touched,” said said a Reddit user.

“To me, it makes a lot of sense to reduce waste AND cut costs by not wasting time preparing and shipping food that won’t be eaten. Don’t like that they charge for it if you want it.

Another wrote: “I worked in a pub years ago. About half of the plates returned to the kitchen with the salad intact.

A third added: “Fresh produce is still quite high, especially in rural areas where economy of scale is not a factor.”

Another said: “The people who bagged the concept are more than likely the same people who lamented that iceberg lettuce was $10 a few weeks ago.”

Said another: “I work as a waitress and most of the time people leave the salad bowl untouched, you can’t reuse it because it has already been served so it will go in the trash. Same for fries.

Others might see the benefits of having less salad and vegetables on the plate.

“I mean I never eat side salads with parma or anything,” one said. “Pub salads are never good, and this will free up space on the plates so they don’t have to put the fries under the parma.”

Another wrote: “Listen, as long as this main dish comes with a truckload of fries, we’re fine with that.”