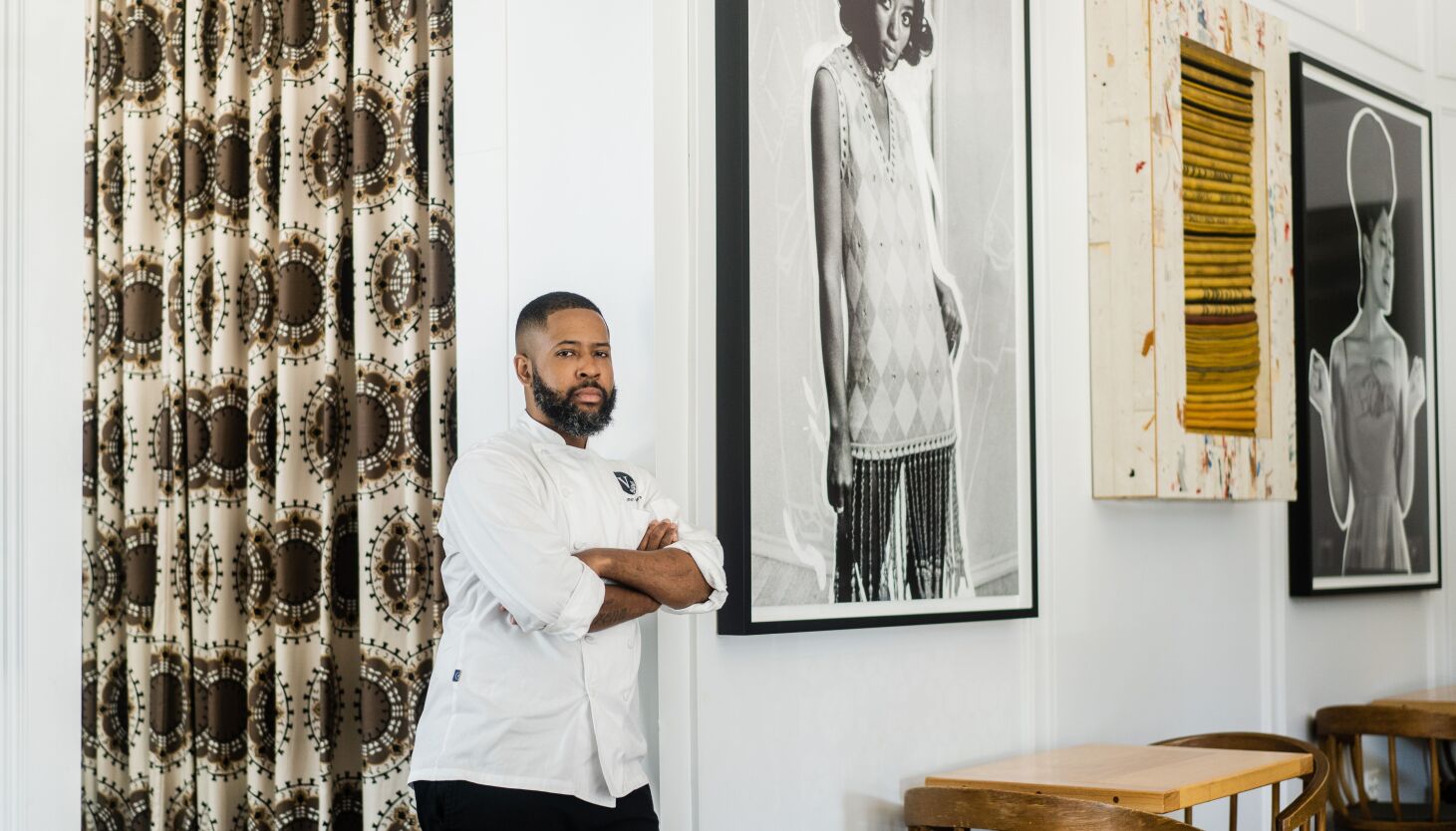 “At the start of my career, you couldn’t pay me to make collard greens,” says Damarr Brown over coffee at Virtue, the restaurant in Hyde Park where he’s worked for four years and which has won two Michelin Bibb awards. Greedy. But now, every week, he cooks 400 pounds of leafy greens, a staple of southern black cuisine.

Showcasing the techniques he learned growing up in Harvey is exactly what made Brown stand out on the final season of “Top Chef” and what helped make Virtue such a hit in Chicago.

As head chef, Brown runs Virtue on a daily basis. He creates new dishes, alters the plates before they land on the tables and, at nightfall, orders the ingredients for the next day.

Brown cooked in restaurants for nearly a decade before returning to her culinary roots at the restaurant on 53rd Street.

“When I started cooking professionally, I didn’t necessarily want to do things [my grandmother] did because it all sounded too familiar to me,” Brown says.

He didn’t know how much watching his grandmother cook cabbage with smoked turkey tails would serve him, or that his trick to getting the right bits from the bottom of the pan had a name: deglazing.

Cooking was just something the family did.

“I was raised by women and I was an only child, so in an effort to keep me out of trouble, they made me be in the kitchen with them,” Brown says.

The food Brown serves may start with his grandmother, but it’s his mother’s name, Trena, which he has tattooed on his right forearm.

At 18, Brown began commuting for several hours to a culinary school in River North. He took it seriously because of the family’s love of cooking and good food, but also because circumstances forced him to concentrate.

When Brown was 15, Trena suffered a debilitating stroke.

“It was probably stress related. She was exactly the kind of person who took care of everyone in the neighborhood, the church and the family,” he says. “It forced me to grow faster. “

Becoming a chef “was seen as something you could potentially be successful in life with,” he says, and he hoped to make the family proud.

These days, Trena lives with her aunt; her grandmother died six years ago.

Fresh out of culinary school, he knocked on the back door of what was then one of Chicago’s hippest spots, mk The Restaurant.

There he met chef Erick Williams, under whose eye he mastered French and Italian cuisine, but who also later brought him back to his roots.

Today, the 48-year-old Williams is the chef-owner of Virtue, for which he won the 2022 James Beard Award for Best Chef in the Great Lakes Region.

Williams, who grew up on the West Side, was the executive chef of mk. He asked Brown, then 18, to make him some scrambled eggs.

Williams received them without comment, and that’s how it all started.

“He didn’t have all the skills,” Williams said.

But, unlike many budding talents, Brown did not retreat.

Brown worked his way up until he helped run the kitchen.

The two parted ways six months before mk closed, but when Williams opened Virtue in 2018, Brown was a natural choice for the head chef.

“The stars have aligned,” Williams says of bringing Brown to Virtue.

“Why hasn’t our food progressed? Williams remembers asking. As black chefs, “how can we provide a space where we explore the best of our food culture? »

Hence Brown, who was not just another son of the Great Migration – when Southern blacks moved north en masse in the first half of the 20th century – but grew up in culinary tradition.

Free to cook as if it were a Sunday dinner at home, Brown-centric techniques were taught to Harvey, such as the “holy trinity” – Louisiana’s answer to a mirepoix or sofrito made with onions, celery and peppers. It provides the base for dishes like rice and gizzards, or “dirty rice”.

“All this work goes into it, but it’s not bragging, it’s just meant to be delicious whether or not you understand what went into it,” Brown says.

“It provides opportunities where you can make a choice about what you would like to do,” he says. ‘Top Chef’ season 15 winner Joe Flamm opened his own spot, Rose Mary, in Fulton Market last year; another Chicago winner, Stephanie Izard, opened Girl & The Goat after her 2006 win on the show.

Brown says he might open “something small,” but right now he’s in no rush to move from slow-cooking to Virtue which has garnered national attention.

Michael Loria is a reporter for the Chicago Sun-Times via Report for Americaa non-profit journalism program that aims to strengthen the newspaper’s coverage of communities on the South and West Sides.