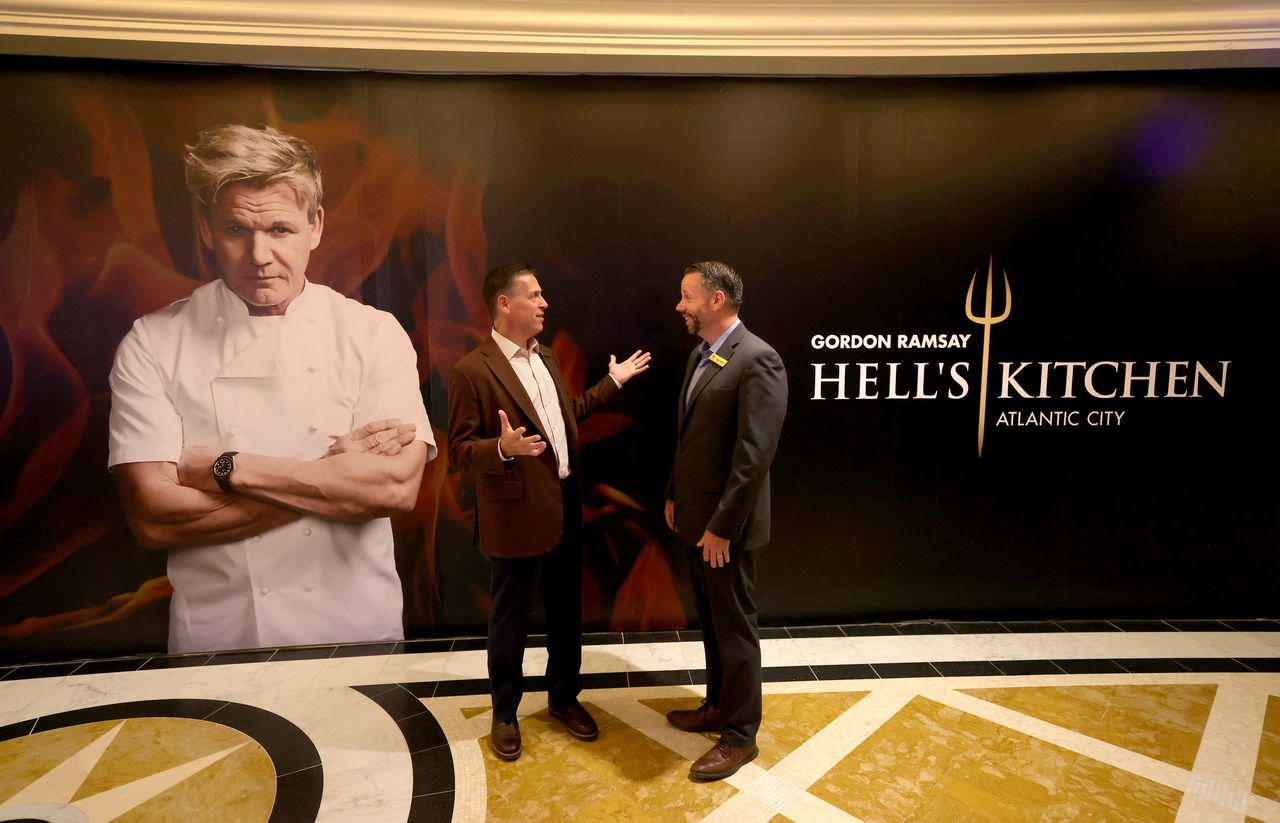 We got a glimpse of Hell’s Kitchen, Nobu restaurants coming to Atlantic City (PHOTOS)

On the second level of the casino floor in Caesars Atlantic CityHidden behind large, artistically constructed walls are two restaurants under construction that will allow guests to sample the creations of two world-renowned chefs.

And that’s just a small taste of the many improvements being made around the property, some of which have already been completed and others which will be ready by the end of the year.

Major improvements are also being made to the outdoor swimming pool as well as improvements to the hotel rooms where 75% are now complete.

This is all part of the $400 million investment that Caesars Entertainment is investing in its three properties across the city and of that, $200 million specifically for the Caesars property. Improvements are underway at Harrah’s and Tropicana.

The opening by the end of the summer will be Gordon Ramsay’s Hell’s Kitchenthe second Restaurant Ramsey on the property, then in early October, the first part of the Nobu brand will open – the Nobu restaurant which will introduce visitors to his innovative Japanese cuisine by chef Nobu Matsuhisa.

By the end of the year, the top three floors of the Centurion Tower will be transformed into Nobu Hotel which will include 82 standard rooms and three suites.

“We’re really going to elevate the Caesars brand because this Nobu brand is world famous. It’s just a luxury lifestyle brand that we’re bringing to Atlantic City, he said.

While standing in one of Ocean Tower’s newly renovated suites, Lodise spoke about what guests would experience with Nobu Hospitality and his thoughts when he dined at Nobu in Las Vegas.

“It’s based on Japanese Peruvian culture and cuisine,” he explained. “It’s about delivering a seamless experience, getting to know your guests, anticipating their needs and providing them with a luxury vacation experience.”

“First and foremost, the food is the best Japanese cuisine you’ve ever had. It’s cooked to perfection. The quality of the product is simply unmatched.

“Your taste buds are just going to be elevated to a whole new level,” Lodise said.

Inside the restaurant, where the players’ lounge once was, workers were busy framing the bar, sushi bar and kitchen. Sunlight from the seaside windows swept across the exposed concrete and steel, giving a small glimpse of what the vibe will be like once the area is complete.

Seating, or what Lodise called nesting areas, will line the perimeter of the restaurant, which will give those on the casino floor a partial glimpse of the interior and also allow those inside to see inside. ‘outside.

The design is part of the Nobu mystique, Lodise said.

The dining room’s wall of windows will provide guests with views of the beach, ocean, and boardwalk.

Including the bar area, the restaurant will seat around 200 people.

A very short walk across the casino floor will be Gordon Ramsay’s Hell’s Kitchen where a building wall with a photo of Ramsay, arms crossed with his usual gaze, is a tease for those curious about what to expect when its opening around Labor Day week.

As in the case of Nobu, the scoping of the restaurant is still in progress but the design, the atmosphere and the experience will be completely different.

Hell’s Kitchen will consist of three floors of pitchforks and a fiery design and will occupy the former space of the Dusk nightclub.

The upper level is next to the casino floor where there will be a bar and lounge. A hole cut in the floor will allow people to look down into the dining room and see the blue and red competition kitchen that represents both teams on the reality show.

The second level will be the dining room where the function tables will have the best views of the kitchen. A fork chandelier will help illuminate the tables.

The first level will be another bar next to the boardwalk.

Lodise said they will nominate the winning chef of this upcoming Hell’s Kitchen competition, which airs in September, to become their celebrity chef.

And the guest buzz around the property has picked up pace as the summer progresses.

Another non-dining related experience that will be ready in mid-July is the renovated rooftop pool and bar.

One of the major upgrades was to tear down the seven-foot-tall wall that blocked any ocean and city views and replace it with a smaller wall with a drinks rail that could accommodate 30 seats.

“I think we’re going to have to get people out by the end of it,” Koster said as he and Lodise took in the now clear view of the beach and boardwalk.

The pool will feature two levels of seating with cabanas. Lodise said a Hell’s Kitchen and Nobu-themed shack is not out of the question where food and drink will be delivered from those outlets.

And the swimming and partying won’t stop when the sun goes down, as a never-before-seen nighttime pool experience is on the way.

Also included in the Nobu pool and restaurant views is Caesars Playground Pier, a once-popular destination for shoppers and foodies that has declined over the years.

Lodise said they were looking to reinvent the pier and bring more entertainment and non-traditional uses to the space.

“The plan is to have something very complimentary to what we do here at Caesars,” Lodise explained.

Without going into details, he also said that it would not be the type of setup typical for a retail store window, but rather a virtual reality attraction for families and small rooms. entertainment.

“We’re bullish on the pier, just think about it differently.”

Lodise said the recent trend of family entertainment in Atlantic City is a good thing, a “rising tide is lifting all boats,” and is thrilled that Caesars is expanding beyond its games and creating something for everyone. .

Thank you for counting on us to deliver journalism you can trust. Please consider supporting NJ.com with a subscription.

Tom Cruise helped Ray-Ban out of bankruptcy by increasing sales from just 200,000 pairs/year to 4.5 million in no time