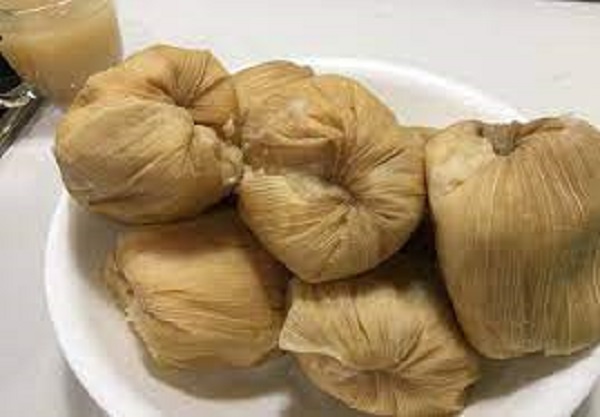 Until the mid-1990s, it was taboo for the people of Akuapem-Mamfe in the Eastern Region to eat Ga kenkey on Sundays and Mondays.

It was an age-old custom in the region.

It took the investiture of the head of Mamfe Akuapem, Nana Ansah Sasraku III, in consultation with his council of elders to abolish this taboo.

But there was a sacrifice to be made; the chief and his elders still couldn’t eat Ga kenkey on those days.

In an interview with The Mirror recently, Nana Sasraku explained that the ban initially only affected Sundays, but was extended to Mondays to prevent people from eating her leftovers, if any.

At that time, the elders of the community performed certain rites to strengthen the warriors of the city when they went to war and they believed that eating Ga kenkey could make them vulnerable, hence the ban.

The taboo was not only for the protection of the warriors but of the whole community.

However, over time, this age-old custom was revoked to allow people in the community to eat the meal.

Ga kenkey is a meal made from corn, molded into balls and wrapped in corn husks. Although it is a staple food of the Ga-Adangbes in the south of the country, it is sold on almost every street corner and eaten by people from all walks of life.

Nana Sasraku, who also serves as Kyidomhene of the traditional area of ​​Akuapem, explained that during his enlistment, he advocated a reform of this custom, which allowed the consumption of this kenkey on Sundays.

“The council decided that since Mamfe was no longer that small community and there were non-natives living among us, that should change. We even had secondary school machinery running, and there were people who left here for Accra and so on. Why shouldn’t we take it out on Sunday? He asked.

Due to a lack of consensus on this decision by traditional elders, he said, there was a delay of about a year before it was finally agreed that residents could eat kenkey on sunday.

Nana Sasraku said the decision, which was announced at an Asafosa, a community drinking festival celebrated by Mamfe residents, was met with great enthusiasm.

“I can still see in my mind the applause and what greeted that announcement. You could see people were really suppressed, in a way,” he added.

Nana Sasraku explained that since it was the prerogative of every chief to ensure the well-being and satisfaction of his people, it became imperative to review the custom and find ways to “loosen” the ban further.

He revealed that a few years later, the traditional council met again to weigh the option of bringing the rulers to bear the brunt of the restriction to ease the burden on the townspeople.

The deliberations, he said, came to a favorable outcome, much to the delight of the people.

“The decision has been made that the council of elders, the traditional leaders of the community, will respect this ban on not eating kenkey on Mondays and which had remained,” he said.

He added that there were no repercussions from the decision since all the rites were duly performed to avoid any misfortune, hence this taboo was abolished and now the townspeople could eat Ga Kenkey without no apprehension.

Highlighting some significant achievements during his 25 years as a leader, he said that despite the disputes that surrounded his selection and enlistment, he was successful in brokering peace between some parties engaged in conflict and working with them. to contribute to its development program for the people.

Among them, the establishment of the Mamfe Methodist Girls Senior High School and the provision of boreholes, with the support of some sponsors, to provide drinking water to the community, apart from that of the Ghana Water Company.

He called on all citizens in the region, especially those residing abroad, to support the provision of social amenities in the city.

Known in private life as Theophilus Nyanteh Akufo-Parry, Nana Sasraku succeeded her late uncle, Nana Ababio Manteaw, in 1997 at the age of 32, to become Mamfehene and Akuapem Kyidomhene on August 18.

He was educated at Okuapeman High School (OKUAS), Kwame Nkrumah University of Science (KNUST) and Ghana Institute of Management and Public Administration (GIMPA). He is married to Mrs. Sakyibea Akufo-Parry (née Asare Ayisi), with two children.

Projects for the youth center

The Mamfehene expressed his gratitude to his immediate family, the council of elders and the people, noting that some of them had passed away.

He said that together with his council of elders, he intends to transform the town’s community center into a youth development center, which will provide space for young people, to prevent them from indulging in vices. such as gambling, alcoholism and drug abuse.

The center will have space for indoor games, theatre, art studio, information and communication technology (ICT) center and lecture halls, where certain life skills will be taught for empower young people.